The joy of sex – and other classical inscriptions 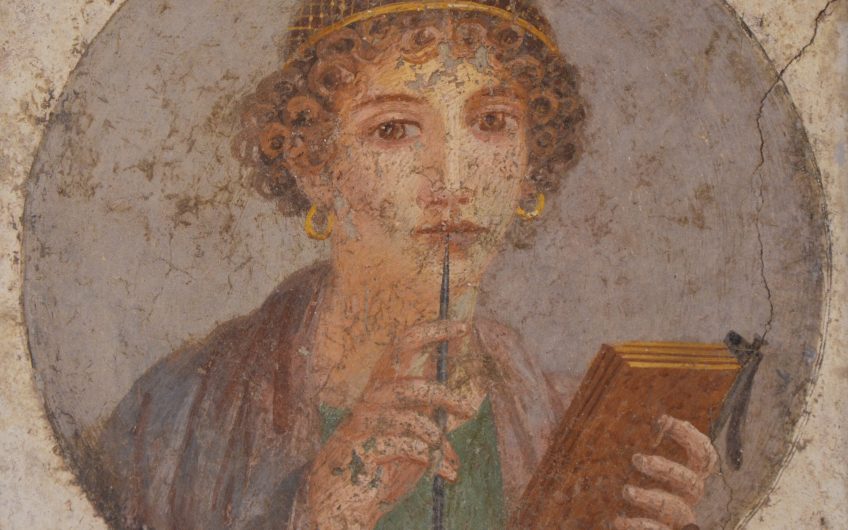 At Oxford University, a brilliant computer, called Pythia, after the Sibyl at Delphi, is examining fragments of classical inscriptions – and brilliantly working out what the missing words are likely to say.

There are few greater thrills in the ancient world than original inscriptions and letters.

Some of the best have only just been discovered, during the dig for the financial news company Bloomberg’s new European headquarters of the City of London – where a Mithraeum, a Roman temple sacred to the god Mithras, was discovered in 1952. They were found beneath a pub in the City during work near Bank Tube station.

During the dig, 14,000 Roman artefacts were found, and all in a miraculous state of preservation – that’s because the Mithraeum was on the banks of the River Walbrook, a small river that feeds down into the Thames. The mud prevented air getting to the wood, stopping it from rotting.

The wet mud has preserved an extraordinary array of Roman finds: the bones of sacrificed chickens; tiny Roman leather shoes, worn by a child; combs; brooches; pewter plates; spearheads; and a charming lead plaque of a leaping bull, thought to be the zodiac symbol Taurus. The finds include 200 styluses used for writing the tablets, 300 brooches and dozens of different shoes, from a soldier’s hob-nailed boot to a lacy, perforated carbatina – the Christian Louboutin of its day. A bread oven has been found, as have the remains of north African cockroaches which fed off piles of grain.

There’s a charming, tiny, amber amulet, perhaps worn by a child, in the shape of a gladiator’s helmet. Valuable amber was thought to have magical protective properties by the Romans, and the helmet shape was symbolic of protection.

Most important of all, though, are wooden tablets, with some of the earliest Roman inscriptions in Britain. Romans wrote letters, by scoring their words into wax, set into wooden tablets, with a stylus – or a sharp piece of pencil-shaped metal – several of these styli are in the Bloomberg artefact display case. The wax has long since rotted away. But Roman letter-writers dug too deep into the wax, leaving their words inscribed into the wood behind.

Buried under 20ft of mud for nearly 2,000 years, these simple Roman wooden tablets are the earliest handwritten documents ever found in Britain.

Among more than 400 unearthed by archaeologists, they include the first known reference to London – and the first IOU.

Most of the documents, written in wax on a folding wooden frame, date from between AD55 and 85.

Among the tablets are financial records, legal documents, and scribed instructions, most likely for servants running errands.

One such note appears to be a shopping list for basic items, but historians believe it refers to a Roman proverb requesting return of a favour.

‘...I ask you by bread and salt that you send as soon as possible the 26 denarii in victoriati and the 10 denarii of Paterio...’

The tablets, made from wood recycled from wine casks imported from the Continent, give a remarkable picture of a Roman London teeming with businessmen, lawyers, tradesmen and slaves. Within a few years of being established, the city was already a whirring mix of commerce, eating, socialising and fashion. Among the documents are wills, disputes over debts and references to heavy beer-drinking.

They also provide an insight into the Roman postal system. Early Londoners wrote letters in soot-blackened beeswax with an iron stylus, or pen-shaped needle.

Once the recipient read the letter, he smoothed the surface with a heated spatula, and wrote another letter in the wax, often carving so deeply he scratched the wooden mount, so although none of the wax remains today, inscriptions can still be read in the wood.

The writer carved the address into the outer, wooden surface of the folding boxes, tied it up and sent his slave to deliver it. Addresses were simpler then, with no house numbers, just the names of neighbours. One address reads: ‘You will give this to Junius the cooper, opposite Catullus’s house.’

The oldest tablet which can be dated exactly is a letter between two London businessmen, acknowledging a debt – then, as now, the city revolved around money.

References to a consul of the time mean it can be dated to the year we now call AD57 – only nine years after Londinium was founded by the invading Romans.

Another tablet contains the address ‘Londinio Mogontio’, meaning ‘In London, to Mogontius’ – the earliest reference to London. From where it was found in the layers of mud, archaeologists have dated it to 65-80 AD.

One letter, the earliest readable tablet, which dates back to 43 AD, in the first decade of Roman rule, shows Roman London was a busy shopping centre full of loan sharks. Written to a sloppy businessman, it says: ‘They are boasting through the whole market that you have lent them money.’

Other finds include a soldier’s will from 67 AD, discovered in the foundations of what was Britain’s earliest law firm. There are also writing exercises, perhaps from the first London school, listing the letters of the alphabet – ABCD – and a series of Roman numerals.

Another tablet records a debt to Crispus, a brewer, for supplying nearly 3,000 pints of beer.

Many of the wooden plates, which were reconstituted from barrels, relate to legal matters and records of financial transactions. One 62 AD tablet is a Roman receipt for 20 truckloads of provision from St Albans (Verulanium), just two years after Boudica's forces devastated swathes of Roman Britain

Among the hundreds of wooden tablets were preserved examples of Roman characters, scrawled across the surface. Researchers say the tablets would have had a number of uses, from note-taking to financial records. Analysis of the text has revealed snapshots of Roman life.

Some 129 people are mentioned in the letters, including Roman emperors and aristocrats, slaves and a soldier who had fought for Emperor Augustus. There are no women mentioned but London was already an international city. There are references to Roman and Celtic names, as well as soldiers from Gaul and the Rhineland – modern France and Germany.

London, then as now, was an international melting pot - and the best way to know exactly what it was like is to read ancient Roman letters.

Let us speak of higher things