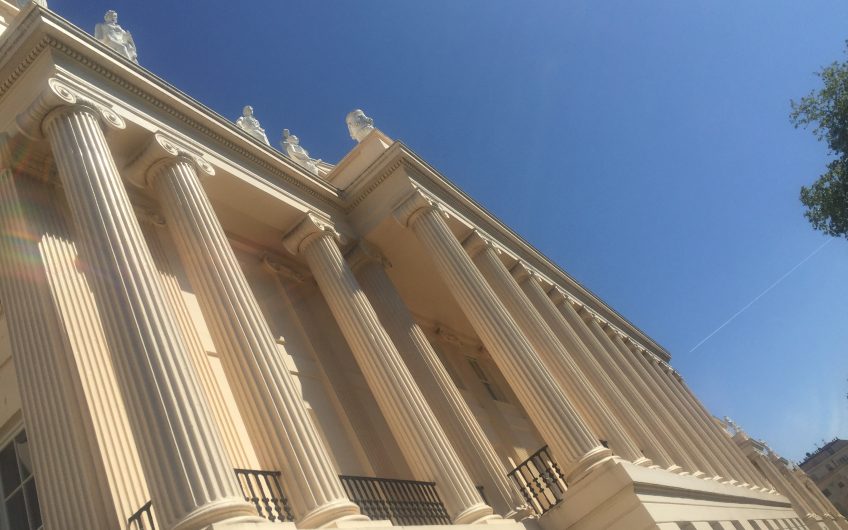 While stucco, or fine plaster, comes in many different forms, all stuccos are combinations of an aggregate, a binder and water. The aggregate is the base reinforcement material – sand, gravel or crushed stone.

Traditional stucco was made from sand, lime and water; now it’s usually made from Portland cement, sand and water. Applied in three coats (the scratch coat, brown coat and finish coat), it goes on wet and is shaped with wooden moulds over brickwork or timber lathes.

Usually stucco was painted beige or grey to imitate stone. Inigo Jones was keen on the stuff, combining it with Portland stone at the Queen’s Chapel by St James’s Palace and the Queen’s House at Greenwich.

Stucco became less popular through the seventeenth century, when Christopher Wren preferred brick and stone and the early Palladians were devoted to stone. But it took off again in the late eighteenth century. Robert Adam went crazy for stucco at Kenwood House (1767), Hampstead. One day in 1778 his family company covered some houses in Bloomsbury Square with stucco. The architect of these houses, John Nash, liked it so much that he eventually became London’s stucco king; most strikingly in his terraces that snake down the eastern and western edges of Regent’s Park. A special clause was inserted in the leases of these terraces that the lessees covenanted to renew the stucco every 4 August. Nash’s predilection for stucco was lampooned in the Quarterly Review of June 1826:

Augustus at Rome was for building renowned,
For of marble he left what of brick he had found;
But is not our Nash, too a very great master?
He finds us all brick and he leaves us all plaster.

My prep school was in one of those Nash terraces by Regent’s Park – North Bridge House, 14 Gloucester Gate. On sunny Tuesday and Thursday afternoons in my childhood, the glare off the creamy-white stucco burnt into my barely formed retinas half a mile away on the school cricket pitch in the middle of the park. If I’d known it at the time, I’d have pointed out to my fellow fielders that Nash was partial to Parker’s Stucco, made by a certain James Parker from clay on the Isle of Sheppey, Essex.

Other popular varieties of render – which is what stucco really is – were Lord Stanhope’s Composition and Hamlin’s Mastic. Nash used both.

Coade Stone, the most famous material of the time, was an artificial stone concocted by Mrs Eleanor Coade on the site of the Festival Hall in London between 1769 and 1833. Durable Coade Stone lasted a lot longer than lots of real stones. Apart from having a matte tone, it isn’t easy to spot because it varies in colour, from light grey through light yellow to beige. The fireproof stone became particularly popular after the Building Act of 1774, which drastically reduced the amount of wood in the decoration of façades.

Eleanor Coade took her recipe for the stone to the grave, but it has recently been rediscovered by Stephen Pettifer, a Wiltshire sculptor. Rootling through the order books of the south Devon quarry where she got her materials, he worked out the exact proportion of clay she used. He deduced that the stone was made of 10 per cent grog (crushed ceramic pitchers), 5–10 per cent crushed flint, 5–10 per cent fine quartz (to reduce shrinkage), 10 per cent crushed soda lime glass and 60–70 per cent Ball clay from Devon and Dorset. Mr Pettifer is now using Coade stone for the statue of a huge Triton, a sea god, for Lord Rothermere, owner of the Daily Mail, at his house in Ferne Park, Dorset.

Coade Stone remained fashionable until the 1830s, when it was replaced by another artificial stone, Portland Cement. By then it had been used by a Debrettsful of grand clients, and it can still be found on places as varied as St Paul’s Cathedral, Nelson’s Memorial at Burnham, Norfolk, and Captain Bligh’s tomb in the graveyard of St Mary’s, Lambeth. The shop front of Twining’s, the tea company, opposite the Royal Courts of Justice in the Strand, was recently cleaned to reveal immaculate Coade Stone beneath a century of soot.