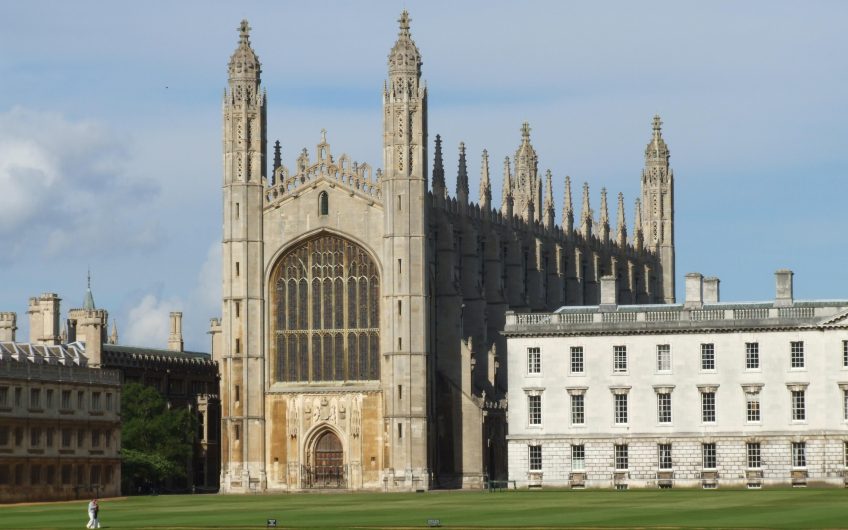 You know that spine-tingling moment when the young chorister’s voice pierces the gloom with the glorious rendering of Once in Royal David’s City?

Well, last year, I decided I wanted to be there to experience it for myself at King's College, Cambridge, instead of making mince pies in my kitchen in Surrey.

The Festival of Nine Lessons and Carols is broadcast to the world live at 3pm on Christmas Eve on Radio 4. As we would be visiting my son in Cambridge for Christmas, this was my chance at last.

Tickets are given out from 7am at King’s College Chapel on the morning of the 24th December. Everyone who wants to be there must attend with their photo ID. It’s only one person, one ticket – and there are 500 up for grabs. Here’s how I got on.

We had set the alarm for 5am as we knew people started queuing way before 7am. I was actually awake at 4am – a ludicrous time to wake my husband Pete. I made a cup of tea and then I suddenly felt that actually we did need to get a move on and I woke him at 4.30. We walked across a dark and sleeping Cambridge – a lovely experience in itself.

5.30am Arrived at King's to the sight of a huge long queue, stretching all along the front of the college in King's Parade and down Silver Street! A bit dismayed. We should have got up earlier we thought, joining the end of the queue. Were there 500 people in front of us? Pete went off to try to do a rudimentary count and he reckoned there were 200 people in Silver Street alone.

6am We got talking to Matthew and his dad Richard in front of us. They had tried to get in to the service last year but gave up. They were determined that this wouldn’t happen this year. Matthew was a teacher and his dad a Baptist minister. The conversation flowed and kept us cheerful. Many more people had joined the queue behind us and it must have snaked all the way to the river.

6.30am We bought coffee and croissants from the Copper Kettle which was doing a roaring trade. I also made use of their ladies.

7am The queue shifted up again and we found ourselves round the corner in King’s Parade staring into the windows of Ede & Ravenscroft, outfitters for Cambridge gentlemen. We slowly edged forward. ‘Wouldn’t it be awful if we were just where the cut-off point for tickets is,’ said Pete.

7.30am We were told we were 540th in the line. I kicked myself. I was awake at four; we could have left earlier.

8am ‘You are a vicar, Richard,’ I said to our new friend. ‘Can’t you have a word with him upstairs?’

9am A porter said there were 50 standby tickets available after the regular 500 were allotted! Our lifeline.

10am Some college students in King's scarves came out on to the little green outside the chapel gates and we were being serenaded! They sang a selection of non-religious Christmas songs. They were really superb, with sublime harmonies.

10.30am Entered the chapel gate and were given standby tickets numbers 24 and 25. We were told to come back at 2.45 pm to the rear door of the chapel.

2.45pm Some familiar faces were at the rear gate of the chapel, including Richard and Matthew, who had tickets number 23 and 24. The porter opened the gate. ‘The first 13 can go in,’ he said.

2.50pm Richard and Matthew were in! We smiled and agave them the thumbs-up. 10 minutes before live broadcast and we were still outside.

He pointed at a seat at the rear. I quickly headed over to it and Pete was ushered somewhere out of sight. Oh dear’ I had not thought of us being split up. But we were in!

3pm Silence fell. The chorister piped up from behind me: ‘Once in Royal David’s City…’.

The choir processed down the aisle. I recognised some of the boys that had been serenading us outside earlier. They were the older choristers of the actual King's College Choir!

We heard Silent Night and In the Bleak Midwinter, along with new carols, rounded off with O Come, All Ye Faithful.

4.30pm I met Pete outside. He had been led to the best seat in the house - right near the altar in the choir! I was so jealous. I should have been sitting there!

5pm We convened with Richard and Matthew at the Eagle for a well-deserved beer.

Do it again? I couldn’t stand the tension – but do you want to give it a try next year?

My father, the Cloud Botherer