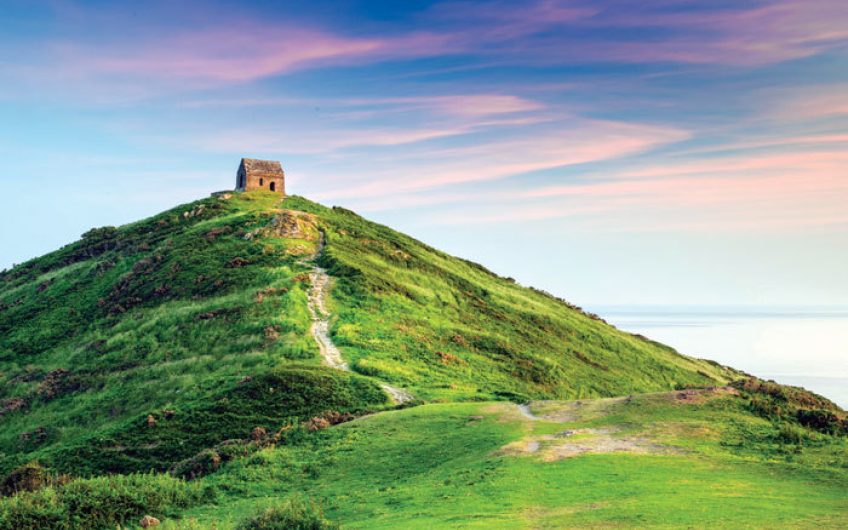 Alone on its ‘blustery bluff’, the Mariners’ Chapel of St Michael stands on the site of a Celtic hermitage, looking out to sea.
View Full Size
1
of 1

If you approach Rame along the wood­ed valley of the River Liner and dip and twist through the village of Millbrook, you can take a narrow lane either by way of the tiny hamlet of Wiggle, or an even smaller place called Forder that straddles a stream. From hilltops and at the end of sudden valleys are glimpses of the sea, ivy hangs from holly trees in the hedges and acres of bracken, brown now, tumbles down the cliffs. You pass a farm where a hanging sign sticks out into the road saying ‘Rabbits – pet or plate’. Travelling on up the cow-muck-spattered lane you pass a white stucco farmhouse called Rame Barton set in a jumbled yard. A sign stuck to a tree advertises merely bed and breakfast. Just beyond, where the wonky rubble wall is full of ivy-leaved toadflax, a gate appears leading to the church which serves the tiny hamlet and parish of Rame.

The name means ‘high protruding cliff, the ram’s head’, and the church offers the last shelter before the desolate headland. It is dug deep into the hill to protect it from sea gales. Partly 13th century, it is all built of rough slate and has a slender, unbuttressed tower and strange ‘broached’ spire. Inside, it reveals a dou­ble aisled splendour which is still lit by candles – nothing else. The place feels ancient and away from the rest of the world. Its surrounding graveyard is huge, wild and unkempt. The headstones are packed tightly together, for this beautiful place high above the cliffs is a favourite burial place. A simple stone in the porch reads, ‘E.O.L. Gone Home’.

Reaching Rame, you feel you are going as far as you can to the edge of something or somewhere. Cornwall stands apart from the rest of England, cut off from the Saxons – Celtic to the hilt. There on the very summit of the headland is the small Mariners’ Chapel of St Michael which is built on the site of an earlier Celtic her­mitage. It is a 20-minute walk from the hamlet of Rame to the chapel. The nar­row road passes a row of coastguards’ cot­tages and ends on a blustery bluff beside a radio mast and lookout hut. A path across smooth turf and worn rocks continues steeply down and up again, a daunting route to the fainthearted pilgrim on a win­ter’s day. The chapel is 300 feet up in the teeth of the wind. The east window, glass­less, looks towards Plymouth Sound and to tiny specks of sails miles out to sea. Among countless pieces of graffiti wrought by local lovers, ‘I LOVE MANDY’ stands out from the rest, carved large and clear into the slate sill. Hawks hover at eye level above the surrounding precipitous slopes of bracken; below, the ramparts of cliff drop sheer to the sea. Basking sharks lurk in these waters and in a big storm a single roller, built up from the Atlantic swell, falls with a pressure which weighs a ton on every square foot.

Earl Ordulf, owner of vast estates in the West Country and uncle of King Ethelred, gave Rame to Tavistock Abbey, which he had founded in 981. Over the centuries the land around Rame Head passed to the Dawnays, the Durnfords, the Edgcombes, and finally to Plymouth Council. From the 15th century, until the Eddystone Lighthouse was built eight miles off the coast, Plymouth paid a watchman at Rame to maintain a beacon there to warn shipping and to bring news to the city of important ships.

In 1815 the HMS Bellerophon, with its infamous passenger Napoleon, was watched over from Rame while it was anchored in the neighbouring Cawsand Bay for a month. After his escape from Elba and his recapture, he had been brought here under the misapprehension that an estate in England was being found for him to live in. His presence drew crowds from all over England.

So many dinghies, rafts, barges and skiffs filled with gawping onlookers sailed out to where the Bellerophon lay that you could walk from Plymouth Hoe all the way to Cawsand on their decks. Napoleon appeared on deck twice a day and waved to the assembled cheering masses, wearing white gloves and a uni­form he had had pressed in Plymouth spe­cially for the occasion.

When the crew finally shipped anchor and set sail for St Helena, past Penlee Point from where the foghorn now moans, Rame Head and the Port Eliot and Anthony estates along the cliff were the last bit of England he set eyes on. He turned to Captain Maitland and said qui­etly, ‘Enfin, ce beau pays.’