The joy of gossip – AN Wilson 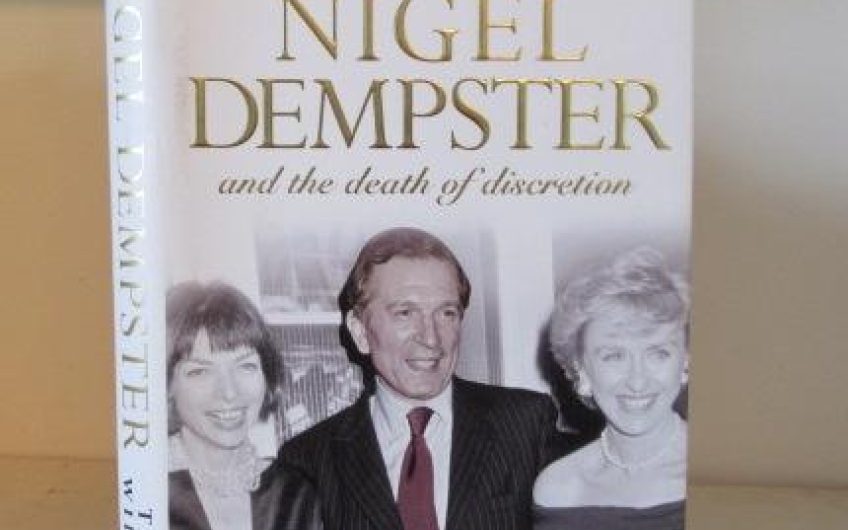 An American university study has found that gossip is good for you. AN Wilson remembers the journalist Nigel Dempster: Proust without the literary genius - but with a genius for gossip, an under-rated art form

Lockdown does have a strange effect on the mind.

Normally it is only in the hours just before sleep or just before waking when the Past, sometimes ghoulish, sometimes funny, returns to me, but I find in the sessions of sweet silent Lockdown that I am in a perpetual state of remembrance.

I have been trying to write fiction, and realizing as I do so that the central figure of the story which engages me at the moment – God knows if I’ll ever get anywhere with it – is obviously, though female and young, derives mysteriously from thoughts I’ve had over the years about the celebrated gossip columnist on The Daily Mail, Nigel Dempster, whom I used to see a lot of.

When I first came to know him, I disbelieved Dempster’s claims to be on intimate terms with the figurines who peopled his celebrated column. It was astonishing, when I took to going to his office to drink white wine in the middle of the morning, to discover that the likes of Princess Margaret, about whom he wrote a very good book, or Lady Di, rang him almost every day, feeding him with his scurrilous stories. They needed the drug of journalism just as much as he did. The old case of “How can we know the dancer from the dance?”, I suppose.

Footling around on the laptop, I found this little tribute I wrote, having attended the Memorial Service in, my God, I’d have said a few months ago, but it was 2007. A detail I omitted from the tribute was that his great friend Peter McKay, no churchgoer he, (and if he were to be a churchgoer it would be to the Kirk) used to pick Nigel up every morning in the last wretched morning of his life, and wheel him to the Oratory. When Dempster died, his widow Camilla , very understandably, asked for a totally private funeral. I crept unobserved into the Oratory and stood a long way off in the shadows, to see the tiny group of mourners, less than a dozen I’d guess, and to hear McKay – his Scottish tones , in my ears, more usually passing on some mind-blowingly shocking piece of gossip – reading the Epistle in front of the coffin.

The last two pages of Scott Fitzgerald’s The Great Gatsby are an astonishing prose-poem, not only about the mysterious Gatsby himself, but about America, and optimism, and “the orgastic future that year by year recedes before us”. I heard the passage read aloud last week by Louisa Dempster at the memorial service for her father Nigel. Memorial Services are always rather strange occasions, none more so than the gatherings for departed journalists, which are traditionally held at St Bride’s Church in Fleet Street. There is usually a blending of sacred and profane. In the service for Dempster, the superb choir sang Faure’s Pie Jesu and Cole Porter. There were excellent addresses which reversed the mean-spiritedness of some of the obituaries. Both Paul Dacre, Editor of the Daily Mail, which published Dempster’s legendary Diary, and Charlie Brooks, who trained Dempster’s horses, paid tribute to the extraordinary generosity of the man. The lavishness. Dacre dwelt on the dark side of Dempster’s nature, and his felt need for forgiveness, which was presumably what led him in the last, tortured, years of illness – progressive supernuclear palsy – to become a Roman Catholic.

Auberon Waugh, who referred in print to Dempster as the Greatest Living Englishman, spoke of him in private as “a lost soul, who knows he is lost”. This remark was made twenty years before Nigel’s illness, but it showed Waugh’s percipience. He had sort of intuited the spiritual journey which would end at the Brompton Oratory.

I found Dempster a wonderfully entertaining figure, both on the page and in person. He was Proust without the literary genius. That is, his amused preoccupation with the rich and the aristocracy, of whose genealogies and sins he possessed an encyclopoedic and obsessive knowledge, was based on love-hate. The love and the hate were measured in almost equal doses, in both the case of Nigel Dempster’s Diary and in A La recherche de Temps Perdu. Dempster was the confidant of Princesses and Duchesses who telephoned him freely, and frequently.

The degree of sycophancy which such relationships inevitably required, necessitated some contrary outlet. So the Grovel column on Private Eye was born, in which Dempster and his friend Peter McKay could tell the stories which more respectable newspapers,at that date, did not print. There was something superbly liberating about the work they did, exposing the hypocrisies of those who were greedy for the adulation of the public. It was denounced as cruelty, but in most cases it was never cruel enough.

And the point was, it was nearly always true. Many is the lunch I had with Dempster when I sat, open-jawed with disbelief as he told me something about the formerly private life of a royal or famous public person. Time nearly always proved these stories to be dead accurate. There is a tremendous snobbery in journalism about gossip columns. Dempster himself preferred to be known as a “diarist”. But the gossip which has been unearthed by these columns will outlive the pomposities of the “comment” sections of newspapers. That may be a symptom of our decadence as a civilization, or it may be a sign that we live in a truly Open Society.

Tolstoy disposed of the Great Man Theory of history in War and Peace replacing it with a sort of mystic Hegelianism, in which the movement of events and the collective will explain such things as victory in battle. We may have outlived the Theory of the Great Man, but the Gossip Columnist, and Dempster above all, exposed our times as the era of the Little Man passing himself off as a Great Man.

The parade of shady customers whom the gossip columns have pursued, from the ludicrous Lord Archer (who was at the Memorial Service), from Jeremy Thorpe to Robert Maxwell, from James Goldsmith to …well, you know who – make a superb danse macabre on the grave of civilization. Dempster was the maestro who conducted their dance. He and his friends Waugh, Ingrams, McKay and others changed the climate of journalism for ever. Without them, these rogues would probably all have continued to pull the wool over our eyes – as many of course, do.

I came home from the Memorial Service ,however, with my head full of the reading from Scott Fitzgerald. The hectic loud parties over which Gatsby had presided, and his own essential fraudulence….I opened the book and started to read it again for the umpteenth time.

What they don't tell you about old age

My husband – an early Brexiteer

My salute to the Star-Spangled Banner