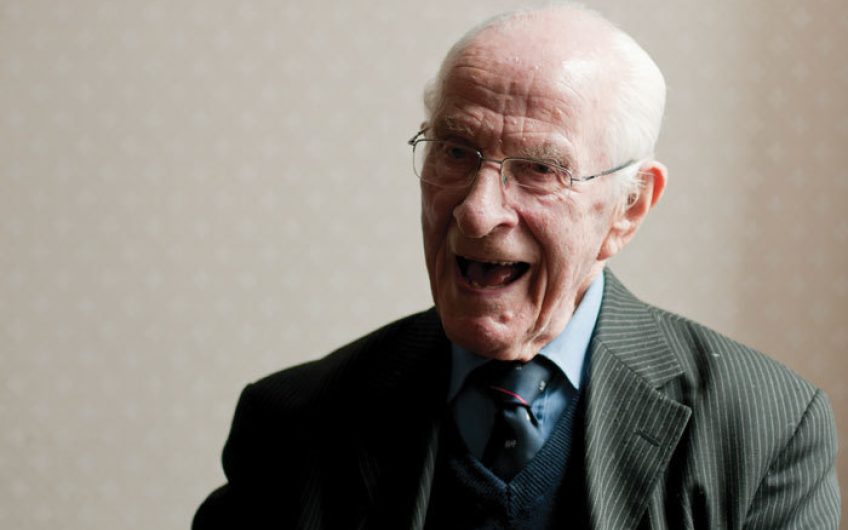 The eminent allergy specialist has died at 108. The great man was interviewed when he was 107 by Leila Haddou

What’s his secret? World famous allergy specialist, 107-year-old Dr Bill Frankland, still sees patients and jets off to international conferences. Sitting in his Harley Street flat, which doubles as a consulting room, he answers the question: his secret is simply a matter of luck.

‘It’s a miracle I’m still alive,’ he says. ‘I’ve had so many near-death experiences.’ Being born a twin weighing only 3Ibs 1 ounce was dodgy in itself, but, he says, his first real stroke of luck was avoiding scarlet fever, which claimed the lives of his sister and two uncles.

He had another episode of immense fortune during his training when he went for an interview in an eye clinic.

‘I had no interest in eyes, but I saw a pretty young blonde when I arrived. I thought I’d better do well so I could get to know her.’ He got the job and married the pretty blonde, Pauline, in 1941. She died in 2002, a heartbreak he has met with fortitude and determination to carry on living.

He joined the army at the start of the Second World War, and was given ‘unthinkable responsibilities’. He escaped death again during the Blitz when treating an officer’s wife who had sprained her ankle. On hearing the air raid sirens he feared the hospital might be a target, so took her outside to one of the drains for shelter, where a bomb just missed them. He burned his fingers on a piece of shrapnel but, extraordinarily, this was his only war injury, despite spending the next few years of his life as a prisoner of war.

His first posting abroad was to Singapore, already under siege by the Japanese, where he was to endure ‘three and a half years of hell’. The troops came under constant mortar fire and the colonel of his regiment was decapitated. He cared for the wounded in Changi Hospital and narrowly dodged death again. ‘There were two of us doctors, and three days before Pearl Harbor we had to decide who would leave to work in a new hospital at Alexandra in the south west and who would remain at Changi.’ They tossed a coin and Dr Frankland remained. The doctor who went to the new hospital was murdered there on 14th February 1942 in a Japanese killing frenzy known as the Alexandra Hospital Massacre.

The day after the massacre the British forces in Singapore surrendered to the Japanese and Changi Prison became a holding camp for soldiers before they were sent out to work on the railways. Life was grim. ‘We officers were lined up and bashed hard if the men misbehaved,’ says Dr Frankland. ‘The best bashing I ever had, I didn’t feel a thing – I was just knocked straight out.’ When he came round, concussed and confused, he staggered towards a Japanese officer with clenched fists. Just as one of the guards raised his bayonet to kill him, a senior Japanese officer intervened, saying they needed all the doctors they could get.

He continued to care for his fellow soldiers until the war was over. The troops were asked if they would like to see a psychiatrist when they returned to England. ‘The only person I need to see is my wife,’ Dr Frankland told them.

After the war, he specialised in allergies. He worked with Sir Alexander Fleming but the two didn’t always see eye to eye. Writing a chapter for a medical textbook which was sent to Fleming for editing, Frankland was surprised to find that his prescient statement that an increase in the use of penicillin would lead to an increase in allergy to the drug had been altered by Professor Fleming. The new version said: ‘With increasing purity of penicillin, allergy will become less common.’

Despite his return to medicine, the adventures didn’t stop. Because of his expertise in the early days of penicillin his opinion was often sought, and in the late 1970s he was asked by government officials to go abroad on a mysterious mission. He was told only that he would receive VIP treatment and that his destination was Benghazi, Libya. However the plane landed in Nairobi and he had to make his own way to Libya. Only then did he discover what his mission entailed: ‘This was about a patient who had died as a result of taking penicillin and I was to be an advocate judge.’ The victim had been a personal advisor to the Libyan prime minister. The doctor who administered the drug was a friend of the Italian prime minister. Tensions between the two leaders had been mounting. ‘Should he be shot or hung?’ was the question Dr Frankland was asked. Luckily, the doctor was sent to prison instead.

A pioneering allergist, Frankland introduced the system of pollen count on which many hay fever sufferers now rely. But he’s a modest, humorous man and says that outside of his career, his greatest achievement was beating his friend in a race at Oxford and winning sixpence. He went on to run in university championships. ‘It gave me more stimulus than anything else. Due to a bet, I was shown that I could achieve something I didn’t think I could do.’

He speaks for many when, reflecting on old age, he acknowledges that while you may be handed accolades, you are also subject to enforced invisibility in a society that continues to exclude older people. ‘Your family may think you’re just an old fool, so it was nice being made an honorary fellow at my old college at the age of 99 – it gave me a boost.’

He looks at the clock – he has an appointment. The secret to his longevity isn’t just to trick fate and dodge death in the way he has done, but to simply keep going. Age is no reason to sit down and give up. ‘What would I do if I didn’t work?’ he asks. His advice to the rest of us? ‘Live in the present, and don’t take anything for granted.’

Home-Schooling isn't Hell – I love it! By Valerie Grove

The return of nobility - thanks to coronavirus