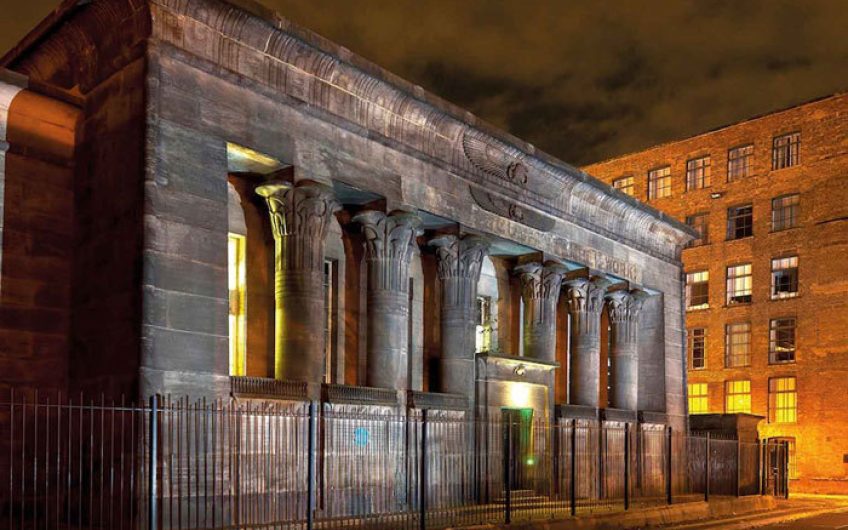 John Marshall’s Victorian factory in Leeds had the biggest room on earth and a grass roof grazed by sheep. Now it might be used for a northern outlet of the British Library, writes Lucinda Lambton

In 1840, John Marshall, pioneer of the Leeds flax industry, commissioned an architect of renown to design him a thunderingly great temple in the style of the Egyptian Revival, to house his new mill.

The architect was the sweet-faced Joseph Bonomi the Younger, who was responsible for the gates of Abney Park cemetery in Stoke Newington – inscribed in hieroglyphics with the words The Abode of the Mortal Part of Man.

As well as adding yet more allure to Leeds’s battery of architectural beauties, this was no mere caprice. Rather Temple Works was a scholarly salute to Egypt’s pre-eminence in flax and linen in the ancient world, which had remained more or less unchanged to that day.

So as to ensure accuracy, the orientalist painter David Roberts, who was involved in the mill’s design, took himself off to the Temple of Karnak on the Nile to study yarn production. How delightful to dwell on his researches subsequently being realised so magnificently in Leeds!

John Marshall was involved with the city’s Philosophical and Literary Society, which had just acquired the Egyptian mummy Nesyamun for the Leeds Museum, where it can still be seen.

Hence the most suitable scene was set, with plans to build his flax-producing factory in Leeds, with papyrus capitals on its pillars, based on the temple of Horus at Edfu.

The mill’s chimney was designed in the form of an obelisk, which sadly cracked and had to be replaced. Even the steam engine, by Benjamin Hick and Sons, of Bolton in Lancashire, was designed in the Egyptian style, with the regulator embellished with a winged solar globe flanked by rearing cobras. This appears three times on the mill’s façade, both in the centre of the building and, as was common in Egypt, over the door case.

The vast main weaving shed, covering two acres, at 396 feet long by 216 feet wide, was acknowledged by the press to be ‘the biggest room in the entire world’. Certainly, when it was originally set down in somewhat bleak, semi-rural surroundings, its immensity must have seemed remarkable.

Inside, cast-iron columns supported the ceiling, while doubling up as drainpipes to collect water, then used to produce steam to power the machines that were manning the 7,000 hand-driven spindles. With its complex heating network in underground tunnels and a lighting system that worked round the clock, it was even described as being the most technologically advanced building in the world.

Sixty-seven large, conical skylights marched forth on the roof to give the maximum amount of light to the 2,000 workers below. Nor was that all there was to marvel at. For – wait for it – as a way of keeping moisture in the air, to keep the flax from breaking, Marshall sowed a meadow on the roof, where he kept a flock of sheep to maintain mown order. It was ‘luxuriant grass’ according to the Penny Magazine of 1848, ‘with slight undulations of level so as to make the resemblance to a field more striking’.

As if this was not enough to wonder at, the world’s first hydraulic lift was also installed to carry the sheep up to their grazing ground!

Lamentably, it was all abandoned, as one of the creatures fell through a skylight into the spinning machinery below; although, according to the Times, one ‘noble Lord at Westminster opined that “such mills allowing cultivation on the roof would be important in future agricultural development” ’.

The Egyptian style was brought to architectural attention in England with the etchings of artist Giovanni Battista Piranesi in the mid-18th century. It reached its peak of popularity around 1810. Thereafter, there were many rarefied examples well into the 1930s, such as the cinema at Sale in Cheshire – fashioned with two pharaohs’ heads.

It was Napoleon’s campaigns in Egypt that first fuelled the fashion into a positively frenzied emergence of the style. In 1807, the poet Robert Southey wrote scathingly of all that he saw: ‘The very shopboards must be metamorphosed into the mode, and painted into Egyptian letters, which, as the Egyptians had no letters, you will doubtless conceive must be curious … with strokes of equal thickness so that those that should be thin look as if they had elephantiasis.’ (The Rosetta Stone was not to be deciphered for another 15 years). ‘Everything,’ wrote Southey, ‘must now be Egyptian … you sit in a room hung round with mummies, and the long, black, lean-armed, long-nosed, hieroglyphical men who are enough to make the children afraid to go to bed.’

At a time when child labour was often brutally employed, Marshall had a liberal reputation for treating his workers better than most factory-owners. He did, though, have enemies aplenty, one of whom alleged, ‘In Mr Marshall’s Mill, a boy of nine years of age was stripped to the skin, bound to an iron pillar and mercilessly beaten with straps, until he fainted.’

He installed fans and attempted to regulate the temperature of the mill, the hotter and more humid the better, making the flax easier to work. His overseers were forbidden to use corporal punishment to control the workers, 40 per cent of whom were young women aged from 13 to 20. Both Marshall and a neighbouring firm, Taylor, Wordsworth and Co, broke exciting new ground by organising weekend holidays in Liverpool, causing grave concern to the editor of the normally liberal Leeds Mercury: ‘Entirely approving of excursions for the working class, and with the kindest feelings towards the workmen of Messrs Marshall … we would express our earnest hope that the Sunday spent in Liverpool may not in any respect be spent in a manner unbecoming the day… There are many excellent men among the above bodies of workmen, and great responsibility will rest upon them for the issue of this new and somewhat doubtful experiment, of a large body of people being away from home in the Sabbath, and on two whole nights.’

Marshall ceased production in 1886; thereafter this noble and now neglected building was taken over by various companies, with umpteen false dawns giving hope that it would survive.

Burberry planned to turn it into a new coat-weaving factory and showroom, but pulled out at the last moment, citing concerns over the Brexit vote.

By 2016, costs had spiralled up to £20 million to set it to rights, and a buyer willing to foot the bill never appeared. The Kay mail-order firm failed. It was also mooted to become an art space, a northern rival to the Tate. Even the Barclay brothers, who own the Telegraph Media Group, had an unsuccessful go. It was they who put Marshall’s Mill up for auction.

Then, blow me down, it went on the market for £1. By this time, much of the roof, as well as one of the great pillars on the façade, had collapsed. The building was in a parlous state; so bad, indeed, that it was declared to be a miracle that it was still standing.

Rollercoaster-like, the uncertainty of the mill’s fate roared on and, only hours before the auction, it was bought by the Commercial Estates Group, a hero stepping forth in the form of David Hodgson, head of strategic development. He prophesied their having to spend some £35 million on the building, ‘just to stop it falling over’. Boldly he intoned, ‘It is a nationally important building that deserves a nationally important use and future.’

So it is and so it will come to be.

Make the most of cherry blossom