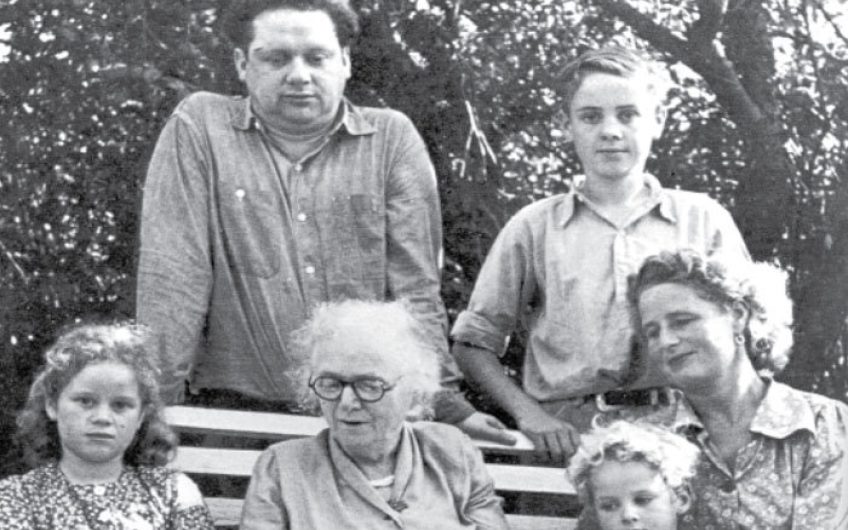 Llewelyn Thomas stands next to his father Dylan. Seated in front, from left to right, are Llewelyn’s sister Aeronwy, his paternal grandmother, his brother Colm and his mother Caitlin (Lauhgarne, 1953)
View Full Size
1
of 1

Dylan Thomas and his restless wife Caitlin had three children. They aroused people’s curiosity because of their parents, but Caitlin’s first-born, Llewelyn, the one that I knew, was worth knowing in his own right. He was a bit dangerous, or he liked to give that impression. He died in November 2000 – if still alive today he would have got drunk, and done something entertaining or embarrassing, or both.

He and a girlfriend came for the weekend once, in 1996, at the same time as two psychiatrists, a husband and wife. This mixture was probably not a good idea. On the Sunday afternoon, after picking at his lunch but getting most of a bottle of Beaujolais inside him, he suddenly threw the Sunday Times magazine onto the open fire because an advertisement in it annoyed him. My wife, sitting sideways on a sofa, with her legs stretched out, said, ‘Stop being silly, Llewelyn,’ at which he whisked off her ankle-socks, like a conjuror doing a trick, and added them to the burning magazine. His girlfriend snapped at him, and he began muttering that he was bad, a baad man, very very baad.

The psychiatrists had gone for a walk, so they missed the sock episode. Later I was in the kitchen, where the woman psychiatrist was chatting, when Llewelyn barged in from upstairs after having a nap, and began telling me about an interesting spider he’d been watching make a web. She said, ‘Kindly let me finish what I’m saying,’ to which he responded by denouncing psychiatry as a failed religion. Later he could be heard muttering that there were certain ratbags in the house, psychiatrist ratbags, who had it in for him.

He had a disordered upbringing in Wales, at the Boat House in Laugharne, where his parents drifted in and out of genteel poverty and had difficulty coping with themselves, let alone children. They managed to send him to an expensive boarding school in Oxford, which he hated and they couldn’t afford. The only known letter to him from his father is a draft, written in 1953 when Llewelyn was thirteen; it describes how the poet fell out of bed when he was in America and broke his arm – ‘I screamed and screamed, but nobody came.’ Like all Dylan’s letters, it concentrated on Dylan. The person he was writing to was incidental.

Llewelyn survived to have a successful career as an advertising copywriter in the 1960s. He once masterminded a promotion for somebody’s razor-blades which involved digging for treasure (small kegs of rum, book tokens, and, according to him, a second-hand Maserati), all buried for the purpose at Camber Sands in Sussex.

He had a habit of disappearing from one kind of life, then turning up in another. At one time he was in Spain, where he won the equivalent of £25,000 in a state lottery. Unable to take the money legally from the country, he strolled across the border into Portugal with his winnings in cash in a haversack, hidden by sandwiches and a banana. Or so he said.

For a while he settled in the Republic of Ireland, where the tax regime was favourable to a professional writer, which he failed to convince them that he was. Then he vanished for a while, so that his Aunt Brigit had to put a personal ad in the Telegraph asking him to get in touch. For some reason he was in Hull. Then he popped up in London, working as a jobbing gardener. That was when I got to know him.

Aunt Brigit was the stable sister of his unstable mother, Caitlin. She lived in the New Forest at Blashford, which was where I went to see her once. She helped bring up Llewelyn after Caitlin dumped him there as a child because he was interfering with her social life.

In later years Brigit’s little house was a refuge that the adult Llewelyn could escape to. Brigit was a vigorous old bird with a square face and a permanent eye-patch, result of a riding accident. Above the staircase hung a painting of her as a young woman by Augustus John, who had been another New Forest resident, and her lover for a while.

Towards the end of the 1990s Llewelyn was living in Dawlish, on the Devon coast. A friend on a visit found him visiting pub after pub, trying in vain to find the one that owed him money from a sweepstake, having lost the ticket. People knew him as ‘Tom Llewelyn’. He bet regularly on horses, which is where much of his money went, and did New Statesman competitions; meanwhile income from the Dylan Thomas estate kept growing, and his one-sixth share meant he didn’t need to do anything much.

I saw him at Dawlish, too. The house was small, and crammed with books. He was ill by this time, and knew he didn’t have long. He talked with relish of a youngish cousin, also on his last legs: ‘We’ve always been competitors. Now we’re seeing who can live the longest.’ Alcohol was forbidden because of his medication. ‘So I’ll just have a large brandy,’ he said, and did. As usual he seemed to have no money. A few days earlier he had received a benefit cheque for £185, and put it instantly on a horse.

The oldies on the catwalk