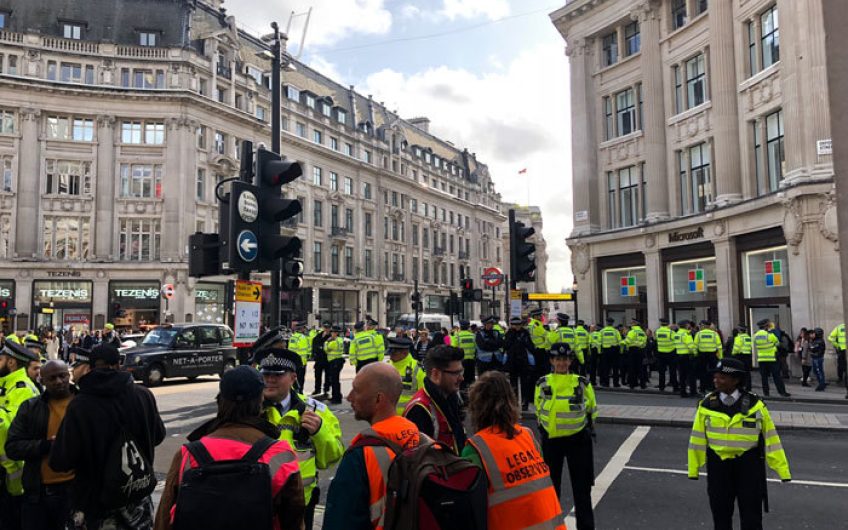 Oxford Circus after the protest
View Full Size
1
of 1

In a lightning-quick display, Extinction Rebellion brought Oxford Circus to a halt today.

No, it wasn’t another pink boat-cum-DJ-booth. It was a pyramid this time. A pyramid frame with a dead tree hanging below the middle of it and rebels perched on platforms above it.

It was quickly surrounded by police and then dismantled with the help of a crane.

I popped down to see what all the hubbub was about. Having made my way down Regent Street, I got to the line of police officers by the underground station to get a look at the terrain.

I had missed the main event but got there for the aftermath. Dozens of police officers were still thronging the area, lining the corners of and streets leading off of Oxford Circus. But otherwise it’s pretty quiet; quiet for Oxford Circus anyway: a few rebels handing out leaflets, one activist giving an interview and a few dozen shoppers gawking at the police lines before moving on (or before being moved on).

Strikingly, the public to police ratio was practically 1:1. There must have been sixty or seventy police offers there. Short of a show of force, why? If there was a realistic chance of the rebels putting up another structure, a third of that number would have been more than enough to stop it.

Come to think of it, if there had been beat officers at Oxford Circus beforehand, the pyramid wouldn’t have gone up, saving us all the faff.

The twittersphere was quick to comment on the stupidity of the rebellion’s move to block up the roads and wasting police time, especially during the current knife crime crisis in London.

Fair point. Even the Rebellion admit they are wasting people’s time – in the most self-righteous way possible.

That said, the blockade of Oxford Circus highlights the inadequacy of reactive policing. Prevent nothing, interrupt the ‘crime’ once it’s already in progress, causing further disruption, and then stand about looking tough. Countless man hours wasted, and the public has to pay the consequences.

Also, it should go without saying, the whole martial law look at Oxford Circus wasn’t a pleasant one. It’s one thing for protestors to occupy the place but when the police do it...

Extinction Rebellion are losing favour with the public. They shot themselves in the foot by disrupting the tube lines; the rebels were dragged off tube cars at Canning Town by enraged commuters. Hoist by their own petard. An online poll found that even 70% the rebels were against the disruption of the tube.

Let them be their own worst enemy. Don’t give them another reason to be self-righteous. It makes them all the more insufferable.