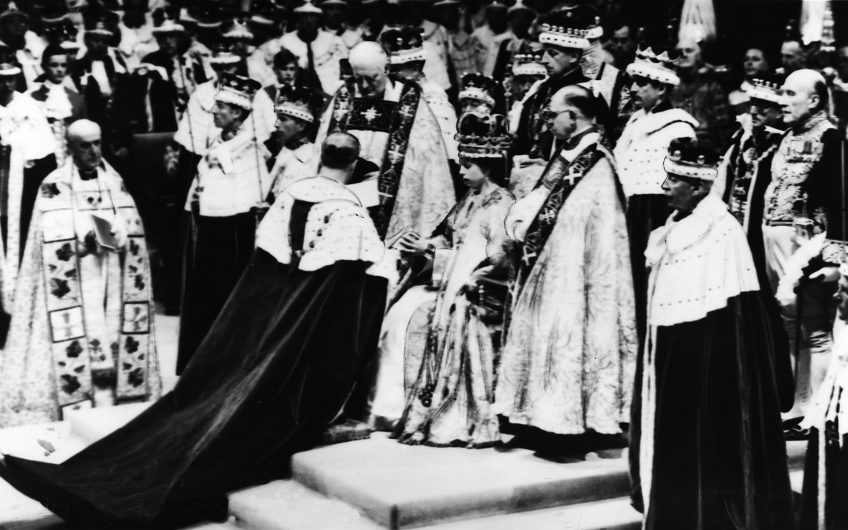 On her Platinum Jubilee, Reverend Peter Mullen salutes the sacred monarch and her Coronation, rooted in the Old Testament

Bring out the best wine, make merry and be thankful for Her Majesty’s Platinum Jubilee. She ascended the throne on 6th February 1952 – 70 years ago.

But what are we celebrating and what is the monarchy? All the newspapers and garish series such as The Crown treat it as a soap opera, an opportunity for the lascivious enjoyment of a peep show. They say the monarchy is the Royal Family and call it The Firm – but it isn’t.

Since the Puritans and the republicans of the 17th-century Commonwealth, there have always been scoffers and mockers who despise our monarchy.

There is a burning politics of envy, begun by the constitutional writer Walter Bagehot and perpetrated on the public ever since. This envy is based on a colossal deceit. Our hypnotised celebrity culture regards the Queen as useless, as indeed Bagehot did. He allowed a moderate importance for the monarchy, but it was only as part of what he called ‘the dignified aspect of the constitution’.

His attitude is exquisitely described by the writer C H Sisson (1914-2003): ‘So Trooping the Colour must be regarded as a leg show of guardsmen, the crown as a bauble and the Coronation itself as something for the illustrated papers. The Queen was dignified in Bagehot’s phraseology – which meant she was not much good. She was for fools to goggle at.’

This is the deceit – to claim that the Queen is only a constitutional ornament to add colour and romance, while the real business of government goes on in the counting house. But Bagehot was mistaken, as those who copy his denunciations of the monarchy today are mistaken.

When we salute or pray for Queen and country, we are saluting and praying for one and the same thing. The Queen embodies the nation that is beyond the latest round of trade figures, the fluctuations in the value of the pound and the comings and goings of particular Prime Ministers.

The laws of the land are the Queen’s laws, just as the language we speak is the Queen’s English. But her role is even more profound. Look at the first line of the order of service for the Coronation of Queen Elizabeth II on 2nd June 1953:

‘In the morning upon the day of the Coronation early, care is to be taken that the Ampulla be filled with Oil for the anointing, and, together with the Spoon, be laid ready upon the Altar in the Abbey Church.’

This is about sacral kingship. The Coronation rite refers back to the anointing of kings in the Old Testament, to Samuel, Saul and David; and to when Zadok the priest and Nathan the prophet anointed Solomon King.

Fittingly, Handel’s marvellous anthem by that name was sung at the Coronation in the Abbey. This was a holy event. That’s why it’s extremely unlikely that the Queen will ever abdicate – she sees her work as a religious duty.

As the Archbishop said, ‘Bless and sanctify thy chosen servant Elizabeth... Receive the Ring of kingly dignity and the seal of Catholic Faith.’

The historic English settlement means the Queen is Supreme Governor of both Church and State. She is obliged to declare herself a Christian monarch and to promise to defend the Church of England. This is why the suggestion that the next monarch should be described as ‘Defender of Faiths’ is mere moonshine and a sort of clowning. The monarch, in her person, stands for the reality of truth.

And this truth is a particular truth - the truth of the Christian creeds.

As Shakespeare put it in Troilus and Cressida, ‘There is a mystery in the soul of state which hath an operation more divine than our mere chroniclers dare meddle with.’

God save the Queen and scatter her enemies! No bunch of celebs can embody our nation. This is a role only the monarch can fulfil.

Vivat Regina! Long may she reign!

Sir Tim Laurence: What presents did Victoria give Albert - and vice versa?