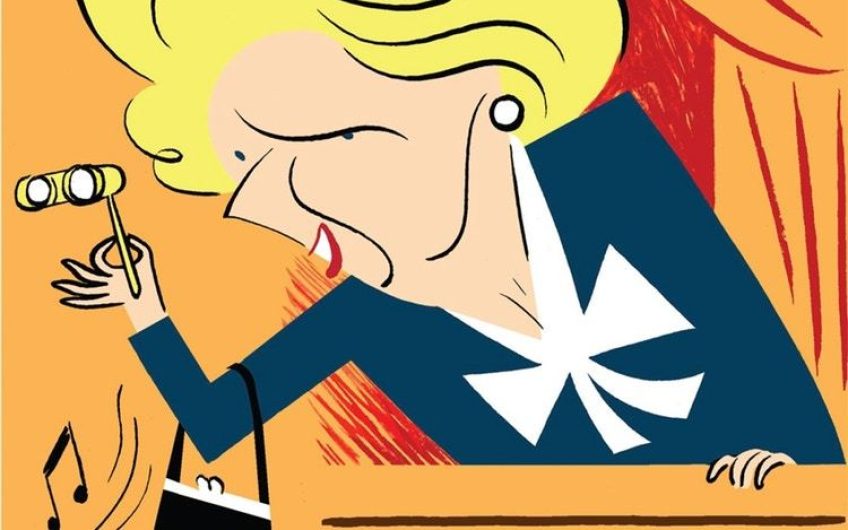 Today in 1979, Margaret Thatcher came to office. Ferdinand Mount, formerly head of her Policy Unit, explains what led to her downfall

The afternoon she resigned as Prime Minister, Mrs Thatcher, all too briefly demob-happy, was swatting away questions in the House of Commons.

Jonathan Aitken, then merely MP for Thanet South (she had overlooked him for office because he had dumped her daughter Carol in the late 70s), and not yet Chief Secretary to the Treasury, inmate of HMP Belmarsh or Anglican priest, rose to ask her to continue to ‘raise her voice’ after leaving office in favour of a referendum on Europe.

She replied that ‘What my honourable friend says had in fact secretly occurred to me - that one’s voice might be listened to after.’

Raise her voice she certainly did. That afternoon marked the real beginning of the Tories’ thirty-year civil war. In booting her out, the Europhiles won the battle, but oh how they lost the war.

She would have loved to live to see the last surviving of her assassins, and the boldest, Ken Clarke, by a beautiful symmetry himself booted out of the Tory party.

This third and final volume of Charles Moore’s stupendous Life, as rich, entertaining and acute as the first two, ends with both bangs and whimpers.

In her very last years, after a series of small strokes, his heroine – and she is never less than that, though he never minimises her faults – declines into dementia, drinking too much, entertaining any unsavoury dictator who cares to call, expecting Denis (who had died in 2003 at the age of 88 - he was ten years older than her) to come in through the door any moment, and roused from her glum reverie at the lunch table in the House of Lords only when Kenneth Baker asks her to join them in singing ‘It’s a Long Way To Tipperary’ – the words of which she remembers perfectly.

But before the shadows fall, she makes her views as thumpingly clear as ever. She denounces the Maastricht Treaty (and votes against it) as ‘leading to a federal Europe achieved by stealth’ and ‘the greatest abdication of national and parliamentary sovereignty in our history’. She accepts the presidency of the Bruges Group (well, after all, she had made the speech), sends £5,000 of her own money to Bill Cash’s European Foundation, and eggs on the ‘bastards’ who are plaguing John Major. And she wins.

When Boris Johnson made a faux appeal to this year’s party conference to confirm that they were not anti- European and that ‘we love Europe’, there came back from the hall only a dismal derisive groan. Even in death she remains the darling of her sadly shrunken party, the immortal queen over the water.

She never said out loud that Britain would be better off outside the EU, though she did whisper it to one of her ghostwriters, but she did say, ‘I have always felt that the best answer for us was to be a kind of free-trade and non-interventionist “Singapore” off Europe’ – precisely what today’s Brexotics dream of. She foreshadowed too the anxieties about those pesky global elites, warning of the emergence of ‘a whole new international political class’ unsympathetic to the interests of ordinary voters.

I don’t think that all this came as a surprise exactly. When he retired in 1987, where this volume starts, Willie Whitelaw warned that ‘The trouble is that, when Margaret leaves, she will leave the Conservative Party divided for a generation.’ She did, and she didn’t care.

Her knack of losing friends was almost as remarkable as her gift for influencing people. One after another, they went, sacked, disgraced, or driven to distraction: Brittan, Biffen, Tebbit, Howe, Lawson, Gow. After he had been dismissed as Leader of the House, John Biffen described it as ‘a sort of Stalinist regime’.

She couldn’t even keep her closest advisers in Number Ten from one another’s throats. I hadn’t realised what a long losing battle Robin Butler fought to get Charles Powell sent away to some distant embassy. The squabbles between the ministers and the consiglieri melded with poisonous effect, so that at one point Thatcher says that either Charles or Geoffrey Howe will have to go, while Lawson says it’s either him or her economic adviser, the deadly, soft-voiced Alan Walters. In the end, both Lawson and Walters go, one after the other.

Moore says that it was only ‘latterly’ that she became too imperious to work with (her staff always found her sweet and thoughtful to work for), but surely she was pretty much like that from the start.

In Volume One, Moore reproduces the memo sent to her by her first Policy Unit chief, John Hoskyns, in August 1981:

‘You break every rule of good man-management. You bully your weaker colleagues. You criticise colleagues in front of each other and in front of their officials. They can’t answer back without appearing disrespectful, in front of others, to a woman and to a Prime Minister. You abuse that situation. You give little praise or credit, and you are too ready to blame others when things go wrong.’

She treated Howe as her personal punchball. At Ian Gow’s funeral, after he had been murdered by the IRA – an atrocity which left Thatcher desolate – Howe delivered an eloquent and touching tribute. After the service, the Prime Minister could not resist saying, in front of Gow’s sons, ‘Why don’t you speak up, Geoffrey? You mumble.’

It was fitting that he should also deliver her coup de grâce in the mildest oratorical masterpiece the Commons has ever heard.

Her tin ear for human relations extended to whole countries. She failed to understand the need for conciliation as well as resoluteness in Ireland. The Anglo-Irish agreement of 1985 had to be negotiated out of her direct line of vision, and she wasn’t too keen on the Good Friday Agreement either. Her hatred of the Germans left her isolated as the only Western leader who stuck out against German reunification until the last moment. During the AIDS epidemic, she was terrified of reaction from the party faithful to Norman Fowler’s bold campaign of public education - ‘AIDS – don’t die of ignorance’ - and went on niggling for as long as she could.

As Moore puts it in his fine epilogue: ‘It would be wrong to say that Margaret Thatcher was unimaginative – she was capable of great leaps of bold thought – but her imagination was inspired only if her sympathies were engaged. If they were not, she tended to become more stubborn, hectoring and dogmatic.’

His own sympathies are mostly hers - especially on Europe - but he sets out the opposing views not only with fairness but with a degree of empathy of which his subject would not, alas, have been capable.

This imaginative capacity – intermittent though it was – enabled her to see far beyond the supposedly limited horizons of the suburban housewife. There was a marvellous quickness in the way she seized on Gorbachev as ‘a man who could do business with’, and a great tenacity in the way she stuck with him when perestroika seemed to be faltering. Nor should we forget her panache, for example, in telephoning Yeltsin off her own bat when he was besieged in the Kremlin; or how when in Namibia for purely ceremonial purposes, she intervened to stop civil war breaking out – an incident I had no recollection of at all; or her secret contacts with Nelson Mandela, all the time she appeared to be pandering to the Tory Right in opposing economic sanctions on South Africa.

We have heard something of this in the memoirs of Robin Renwick, her ambassador to Pretoria, but Moore brings out for the first time quite how grateful both Mandela and De Klerk were for her clandestine mediation.

Her zest for action to combat climate change was equally trail-blazing, though she partially recanted in old age, which was a pity. And it is true that she became more gung-ho out of office. Moore claims, for example, that she was not one of those who wanted to go on to Baghdad and overthrow Saddam at the end of the first Gulf War. But a few years later, I heard her say at least three times in the same evening that ‘we should have gone on to Baghdad’.

At her peak, though, she could show tact and discretion. She could even keep her mouth shut when she disagreed – a quality for which Enoch Powell admired her, not possessing it himself. The Silences of Mrs Thatcher would not be quite as slim a volume as you might think.

We must not exaggerate the precipitancy of her decline. All through her last three years in power, she was busy hatching reforms: the end of the iniquitous Dock Labour Scheme, the opening up of the legal profession, the bringing down of the absurd top rates of tax to a level 40 per cent, the independence of state schools from local authority control. No subsequent government has seriously thought of undoing any of these or the major reforms of her first two terms – the trade union laws and all the privatisations.

So, love her or loathe her (and I have done both in my time), what ultimately unhorsed her?

By the end she was widely disliked in the country, and she knew it (‘I’m not here to be liked’, she said). Moore mentions the minority who actually rejoiced at her death; ‘Ding Dong! The Witch is Dead!’ from The Wizard of Oz briefly touched No 2 on the UK singles chart. But he does not say much about the vague but unmistakable sense of relief that greeted her political demise. A gruelling period of governance had clearly come to an end. From now on, less would be expected of us all, and no doubt less achieved.

The immediate reason for her downfall was not, I think, the one usually given, i.e. Europe, but rather that old favourite, ‘It’s the economy, stupid.’ She insisted on the Poll Tax, probably the worst policy idea since the Peasants’ Revolt of 1381 (which was also provoked by a poll tax). By then almost all her remaining ministers were too scared to warn her properly or had brainwashed themselves into thinking that it might somehow work. Interest rates were up to 15%; inflation was grinding on towards 10%. To her dismay, she discovered that government expenditure was now taking more of people’s money, rather than less.

The ill-fated double act of Thatcher and Lawson had been pursuing a most unThatcherlike policy, which reached its nadir when she was persuaded to let the £ enter the ERM at far too high a rate, while herself demanding an unsustainable quid pro quo in the form of a cut in interest rates. It wasn’t Europe that did for her. She let herself down.