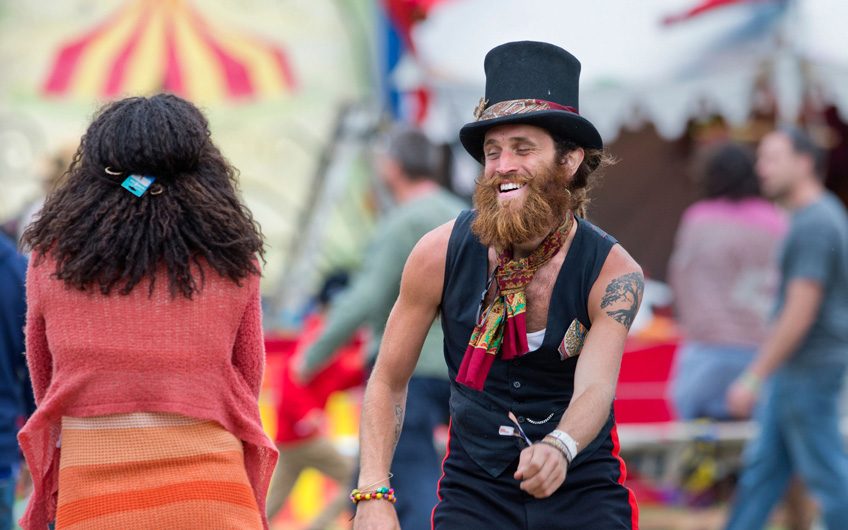 As even Parliament dispenses with ties, you may well imagine that top hats are doomed, along with morning dress and tie pins. However, the topper has an unlikely protector: the summer music festivals that flourish in the UK.

In every one, at least of the non-classical kind, I promise that you will see top hats being worn.  I was recently at a small festival held in the Duke of Grafton’s gardens in Suffolk; there were only about 2,500 people, but I counted at least sixteen top hats.  Most were decorated, one was illuminated and both men and women wore them.

If this ratio of hats to festival attending heads is typical, there must have been well over 1,000 toppers at Glastonbury this year, which surely ranks it alongside Royal Ascot (pictured is a fine topper at Glastonbury in 2013).  I wonder if Mr Corbyn realises this close affinity the two events have.

Silk top hats emerged in the early 19th century; in 1797, the Hatter’s Gazette reported that a London hatmaker caused such a commotion by wearing one in the Strand that he was even accused of disturbing public order. Apparently, the Times wrote the next day that ‘Sooner or later, everyone will accept this headwear.’

Many did, and musicians have often worn them to perform – remember Marc Bolan, Alice Cooper, Fleetwood Mac and others - so it’s no surprise that the fashion has spread to the dandies in the crowd.

And who can forget the gravitas that was brought to so many election nights by the sight of singer Screaming Lord Sutch in his topper, exerting his benign authority over rowdy candidates?

Long may the topper thrive, whoever’s wearing it.

Bring back the Sanatoria