The story of the Crucifixion - Laura Freeman 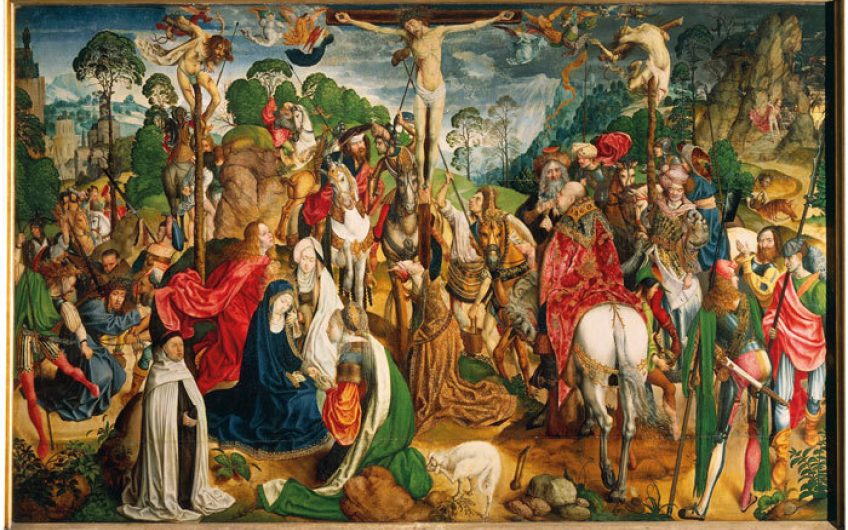 The Crucifixion by the Master of the Aachen Altar (fl 1480-1520). The Virgin Mary, in blue, is attended by Mary of Clopas and Mary Salome. St John the Evangelist is in red, with long, ginger hair. Mary Magdalene kneels at the foot of the cross. Longinus pierces Christ’s side. The good thief is on Christ’s right; the bad thief on his left. Christ on the road to Calvary is shown bottom left. Bottom right are Roman soldiers; top right is the Harrowing of Hell; and topmost right is the hanging of Judas.
View Full Size
1
of 1

What’s the story? That’s the question to ask, standing in front of the great paintings of the Bible, the saints and the classical myths and history. Who’s he? And she? What happens next? How does it all end?

Some stories are easy. Man, woman, snake, apple. That’s Adam and Eve in the Garden of Eden. Temptation followed by Fall. Others are more difficult. I remember standing flummoxed in front of a painting by the German artist Johann Hulsman in the Fitzwilliam Museum in Cambridge, racking my brains for which bit of Ovid has a young woman talking to what looked like Mr Toad dressed up as a washerwoman.

It turned out to be Latona and the Frogs, showing the moment when Latona, mother of Apollo and Artemis, transforms peasants into frogs for stopping her drinking from their lake. Latona isn’t one of the big, sexy stories – Pluto Abducting Proserpine… Venus and Mars… sleeping Samson and scheming Delilah – and mostly appears in ornamental garden sculpture.

Stories matter. ‘The older painters took their subjects seriously,’ wrote Kenneth Clark, patron saint of the BBC’s Civilisation (recently reincarnated as Civilisations) and the wartime National Gallery. ‘They always wished the spectator to believe that the incidents they depicted had really happened and were still worth remembering.’

When Sandro Botticelli painted The Adoration of the Magi, or Leonardo da Vinci The Last Supper, or Caravaggio Salome wincing as the head of John the Baptist is brought to her, it was to bring those events vividly, startlingly to life.

Clark, writing in 1974, was already worried that such stories were being lost. ‘It comes as a shock to an elderly man,’ he wrote, ‘to find how many biblical references have become completely incomprehensible to the present generation.’

Gabriele Finaldi, present director of the National Gallery, shares some of Clark’s concern. Last year, he told me, ‘If we are not familiar with the great themes of classical antiquity and the Bible, if we are not aware of the background, then our experience is impoverished.’

How, then, to enrich it, particularly at the time of a crucial religious festival such as Easter? What to do if your Odyssey is shaky, your Old Testament worse, and you can’t tell your Peters from your Pauls?

Start with the right attitude. I used to feel defeated in front of religious paintings. Once I’d worked out the obvious ones – Annunciation, Crucifixion, Last Judgment – I’d give up and go to the gift shop.

‘Why make a puzzle over it?’ says the dreary academic Mr Small in Mary McCarthy’s novel Birds of America, lecturing one of his pupils in the Sistine Chapel. What Michelangelo really cared about, says Small, was line, form, colour, not ‘those old Bible tales’.

‘You’re so wrong, Mr Small,’ says Peter, one of his bright-eyed students. ‘Michelangelo wanted to say something. I haven’t got the whole message yet, but it’s there.’

Do make a puzzle over it. Start with the figures and setting. Is this the loose-togas and peeking-nipples world of classical gods and goddesses? A place of centaurs and satyrs and booze-ups with Bacchus. Or is this noble Rome? Senators speechifying, Caesar in triumph, Tarquin bearing down on Lucretia…

Or the desert landscape of Nativities, Flights into Egypt and Massacres of the Innocents?

Be strict. Look at the painting first, have a best guess about who they all are and what they’re up to, look for clues in costume, gesture and symbols, and only then check your answer with the wall text.

Cheat a bit. In my first term studying history of art at university, I did a quick job of filling the (vast) gaps in my knowledge with the Usborne Illustrated Children’s Bible, Roger Lancelyn Green’s The Tale of Troy and Ted Hughes’s seductive Tales from Ovid.

Get yourself a spotter’s guide. James Hall’s Dictionary of Subjects and Symbols in Art is a beautifully written gazetteer that sorts Ariadne from Arachne, Joseph from Job. We can tell saints by their attributes, often a symbol of their martyrdom. Poor old St Agatha is shown carrying her breasts, cut off as punishment for her Christian faith, on a silver salver. St Lucy carries her eyeballs for similar reasons. St Anthony Abbot, less gruesomely, appears with a pig, which kept him company in his exile in the wilderness.

Start spotting this Easter with paintings from the Passion – the cycle of paintings devoted to the events leading up to and following the Crucifixion.

Work it out piece by piece. First, Christ on the cross. At his feet: the Virgin Mary, in blue, perhaps in a swoon; Mary Magdalene, often in red, her long hair loose, holding an unguent jar; St John the Evangelist, a handsome man, consoling the Virgin or clasping his hands in prayer (not to be confused with John the Baptist, who wears a sheepskin gilet and carries a lamb).

Either side of Christ, on their own crosses, are the Good and Bad Thieves. These are the ‘bandits’ captured and crucified on the same day. On the hard ground of Golgotha, the site of the Crucifixion, Roman soldiers cast lots. These men, in Roman military dress, throw dice for who can claim Christ’s tunic. In some paintings, a nesting pelican pierces its own breast to feed its young – a symbol of Christ’s sacrifice to save our souls.

In paintings of the Descent from the Cross – the Deposition – you find Joseph of Arimathaea, a finely dressed member of the Sanhedrin (Jewish council), who asked the permission of Pontius Pilate, Roman governor of Jerusalem, to take down the body of Christ. Nicodemus, a follower of Christ, more modestly dressed, is seen pulling the nails from His feet.

Renaissance artists with a flair for the dramatic often include two more women (an excuse for elaborate dresses, hats, scarves – a painter’s delight) fainting, weeping and praying, as in the Descent from the Cross by the Master of the St Bartholomew Altarpiece (c 1500) in the National Gallery.

Paintings of the Resurrection on Easter Sunday show Christ rising from the tomb as Roman soldiers sprawl sleeping at his feet. One of the loveliest paintings in the Passion cycle, on the morning after the Resurrection, is the ‘Noli me tangere’– ‘Touch me not’ – scene, which has Christ, disguised as a gardener, drawing away from Mary Magdalene who kneels in amazement before him. In Titian’s imagining, Christ carries a hoe. In other versions, he wears a gardener’s sunhat and even pushes a wheelbarrow.

Sometimes you’ll be stumped. Keep looking, keep puzzling. If you ever lose confidence, remember: ‘I haven’t got the whole message yet, but it’s there.’

The gripes of Roth - Tristram Powell

What are Comic Cons?

Christmas presents - to thank or not to thank? - Liz Hodgkinson