The Two Ronnies: what a fine pair! - Madeline Smith 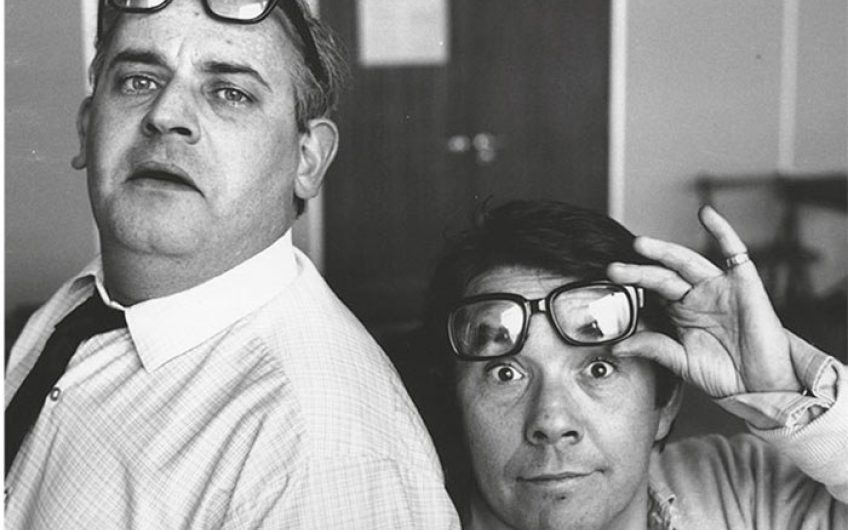 Madeline Smith adored working with the legendary comedy duo, even if Ronnie Barker was obsessed with breasts

What were the happiest days of my life? Working with the Two Ronnies in 1971 would surely be up there.

It was an unalloyed joy being the heroine in the spoof classic serial, Hampton Wick, which straddled the entire first series in 1971.

I can’t pride myself on having been hired for my talent, but even that realisation does not cloud the memory.

At 20, I had a face still relatively unmarked by time. My character, dim heroine Henrietta, was a device to provide the foil and butt of all their jokes.

Ronnie Barker had me practise walking up and down with a completely expressionless face. He directed my entire part and nearly all of the rest of the scenes. It may have been comedy but he was deadly serious. I had already learnt the art of simplicity in acting from a master, Arthur Lowe. He knew the vital importance in comedy of never reacting to a joke or the humour in a scene in which you are participating.

Whatever lay beneath my character Henrietta’s bodice was brought unselfconsciously and proudly to the fore. Henrietta must be totally unaware of this. Nothing must be flaunted. Her innocence was paramount.

That provided lines for Mr Barker, such as ‘Please sit down and take the weight off your chest.’ I had the even riskier line ‘I can’t fasten my chest and fear my treasures may fall out.’

And fall out they did! One night, we recorded the first show of the series in front of a live studio audience at the BBC Studios in White City near Shepherd’s Bush. One of my tightly corseted treasures became unbound and slipped out of its bodice moorings.

It was a long scene. Much dialogue ensued between the two rascals, with the usual lack of reaction from me. I was sandwiched between them, in their heavy disguises of Bill Sikes and the Artful Dodger, in a scene only loosely based on Oliver Twist. The whole serial was written by Ronnie Barker under the pseudonym ‘G Wiley and A Gentleman’.

The unfortunate, accidentally released treasure is there on the recording for all to see. I feared for my life if I had stopped the take – and I don’t honestly believe the Boys would have forgiven me. 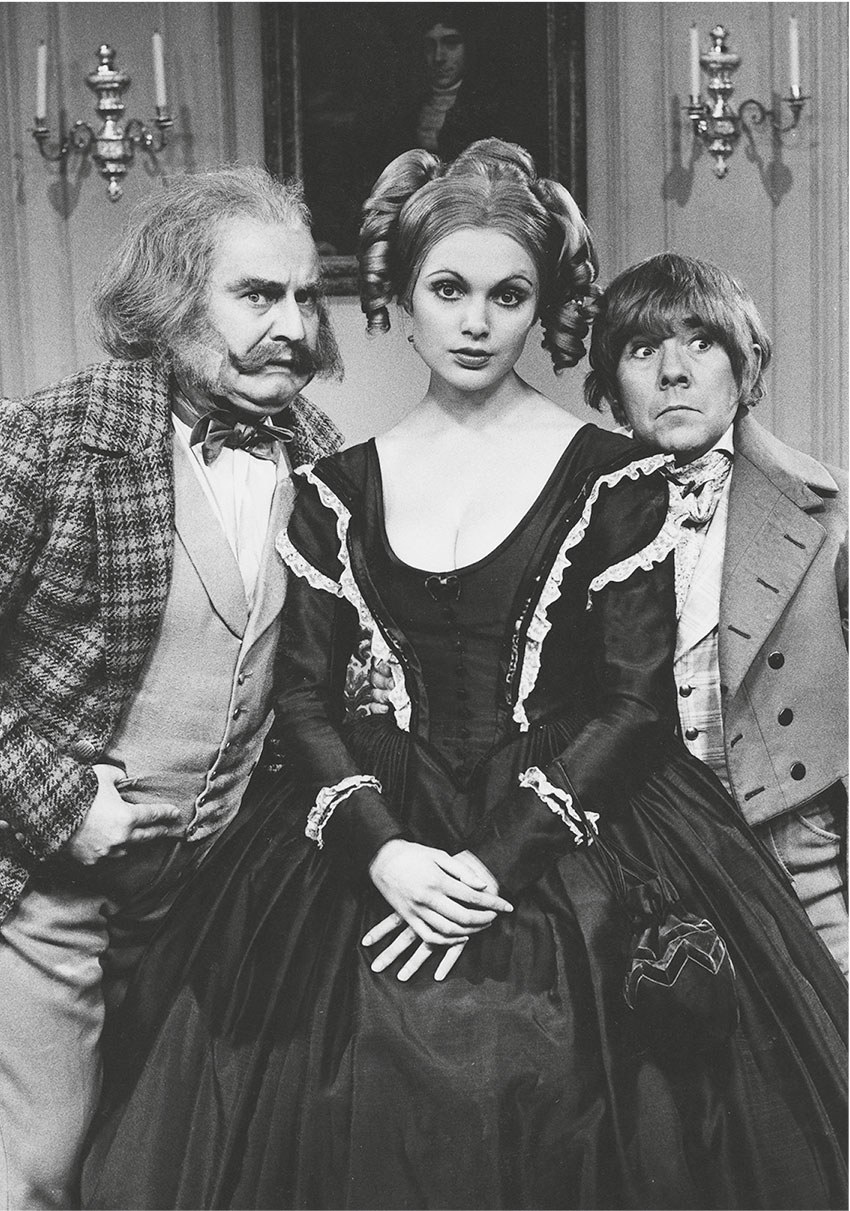 Madeline Smith in "Hampton Wick" in the first series of "The Two Ronnies", 1971

I had first met Ronnie Barker in the BBC ‘glass doughnut’ in Wood Lane, west London, when almost all the studios and offices were based there. Ronnie was bathed in the orange glow of the setting sun while I was being interrogated for the part on the fifth floor.

I was distracted by the majesty of the setting. The building may have had no particular architectural merit but in my eyes it was beautiful. I loved this monstrosity with a passion, including the two nesting wagtails who lived somewhere up in the roof. I used to watch them from my dressing room, going about their business on the tiny central lawn. All the dressing rooms faced inwards in a circle.

I was soon to discover that Ronnie Barker loved elderly female wobbly bits. The more ancient, the better.

He collected hundreds – possibly thousands – of postcards and prints of Edwardian ladies in all stages of undress. They must have flooded in his direction from dealers and fairs in Ronnie’s private life as the proud owner of a Cotswolds antiques shop.

The most prominent features were their bosoms, encased in frills and lace. Their heavily rouged faces smiled from every page. Ron B even published a number of lavishly illustrated bedside books filled with these delectable bonbons.

Whether my character Henrietta was a subconscious fulfilment of these innocent passions we can never know.

Ronnie was in fact deeply respectful when he asked me to remove a clumsy body stocking, in my persona as Lady Godiva streaking across the stage of the Theatre Royal, Bath. It was filmed so tastefully that my retreating posterior was a dot on the horizon. Thanks be to the gods!

Two decades later, I learnt from Ronnie himself that he wished to disown that first series.

We found ourselves in an awkward conversation together at the golden-wedding celebrations of actors Richard and Annie Briers. Certainly the first series was never repeated in Ronnie’s lifetime. He gave me the excuse that he found the series ill-prepared and that it had not yet achieved his expected high standard of professionalism.

Hit by this bombshell, I walked away to find my coat. All the while, I was wondering if there may have been complaints from viewers about some of the content.

I loved my friends the Two Ronnies. I use the word ‘friend’ advisedly when discussing Ronnie B because, although I admired and adored him, he was almost impossible to know. He and I frequently used to share a taxi on the way to a sound studio to record my faux diary-page commentaries for each episode of Hampton Wick.

Ron was a man of thought, more than conversation. When our eyes occasionally met in the close proximity of the cab, I noticed his had the most extraordinary depth and variation of colour.

It was as though he had tucked himself away behind his glasses. He was a man of such complexity I often wonder if he ever really knew himself.

The two men were poles apart in nature, as well as build. Ronnie C was sporty, outgoing and diet-conscious; Ronnie B was introspective, diffident, sedentary and exceedingly fond of his tum.

But they shared an uncanny knack for learning lines and a tightly controlled work ethic – not least in the rehearsals for all the many sketches in the show.

On a Monday morning, the lads would sift through dozens of scripts. They were swiftly read and discarded to the floor. In moments, decisions had been made and I never saw any hesitation or heard a difference of opinion.

Writers such as Michael Palin, the late, great Barry Cryer, Dick Vosburgh, David Fenwick and Graeme Garden occasionally lost their heads on that parquet floor. Only a few made it to posterity.

By the end of the week, the Two Rons were word-perfect, while I, as ever, struggled with my few lines.

Ronnie Corbett was a dear, joking, kind man, of whom I was extremely fond. He seemed on the surface to be a simpler soul than his friend.

But that would be to underestimate him. He was an almost impossibly hard taskmaster to himself, striving almost for the unachievable in his constant fight for perfection. His slight frame contained the beating heart of a meticulous man.

Once we got into the studio, he was tough on the floor manager – particularly over the famous seated monologue, delivered straight to the camera.

Gentle Brian Penders then ran the studio floor. He was later to become the director. Brian’s eyebrows were raised over Ronnie C’s many demands over the positioning of the chair and the massive autocue: Ron never learnt the monologue written by Spike Mullins. I used to watch with glee during these rather exacting rehearsals.

Dear Corbett told me one day, over a location tea break, that he had been gazing at my pins. He thought they were a bit thin.

He was right, of course!

I may have lumps on my chest but my limbs were like soft, pink worms and no mistake. Not a muscle in sight.

I used to hide in the broom cupboard during gym class at St Anne’s Convent, Ealing, rather than encounter the horrors of chain-smoking Miss Latham, a pre-war relic dressed in Army fatigues.

Asphyxiation in the cupboard was definitely preferable to climbing the ropes while the teacher looked with increasing interest at our ascending posteriors, encased in flapping navy bloomers. No leg muscles appeared during my seven-year sojourn at St Anne’s.

But let’s face it. I wasn’t hired for my pins.

The Duchess of Sussex likes using her own title - why does she get other people's wrong? By Harry Mount