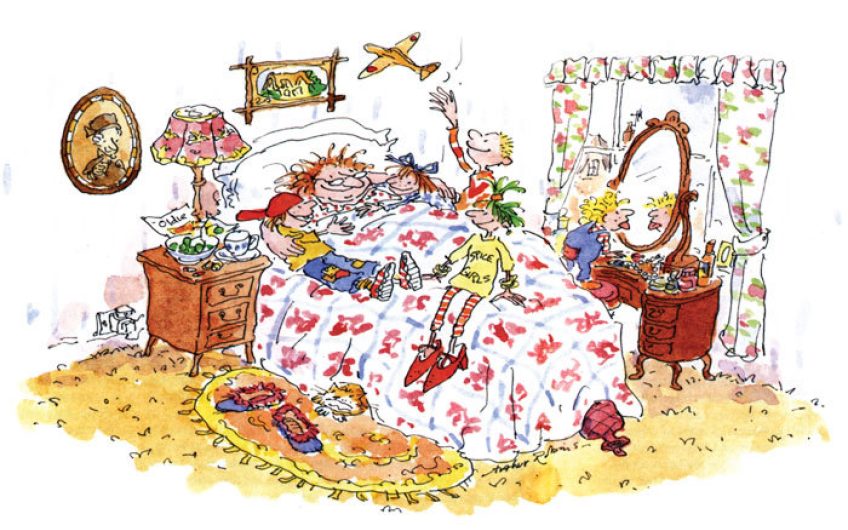 The late great Sue Townsend (1946-2014), the creator of Adrian Mole, on being a beatnik teenager and getting a grandmother's second chance (Issue 115, October 1998)

I am writing this at ten minutes to three on the morning of 14th September, which is the copy deadline I have been given by The Oldie. Please don’t feel sorry for me. It was three years ago that Richard Ingrams first asked me to write about being a grandmother. Three years ago I had four grandchildren, I now have five. Three of them visited me this afternoon. I was lying in bed, eating grapes and reading the Sunday papers. When I heard them come thundering up the stairs I hurriedly put my lipstick on and modestly pulled the sheets over my Knickerbox satin shorts’n’camisole bed wear. After kisses all round, the seven-year-old gave me an excited account of the Spice Girls concert she’d attended in Sheffield the night before. ‘They changed their clothes six times,’ she said, admiringly, ‘and Emma was the best.’ Meanwhile, the three-year-old fell upon the bunch of grapes, ignoring her sister’s stern warning that, ‘If you eat the pips you’ll die’. I noticed that when there were only stalks left in the bowl, the little one went to a mirror in the bedroom and studied herself closely. Was she searching for signs of imminent pip-induced death? Who knows? All three-year-olds are mad. It’s pointless to speculate on what goes on inside their heads.

My husband gave the eleven-year-old boy a balsa-wood aeroplane that he’d constructed the night before, and this techno-whiz of a child went into the garden and marvelled that something without batteries or remote control could fly and dip so elegantly, using only the low-tech breeze.

None of the children asked me why I was in bed in the afternoon. They are used to seeing me lying around. I have six sofas in the house and one hammock in the garden for that very purpose. I was reminded that my own grandmother always went to bed on Sunday afternoons. She took the News of the World and a half-pint of dark brown tea with her. It was probably the high spot of her hard working week.

She was called Lillian (my middle name) and she looked after my granddad, Jack, two grown-up children, two lodgers, and various visiting grandchildren. She worked full-time and kept her small terraced house immaculately clean. There was a back-breaking routine of housework starting at seven o’clock in the morning, when she would empty the urine from the pot under the beds into an enamel bucket, ending at eleven o’clock at night, when she would bank up the coal fire in the back room, in the hope that it would last until morning.

I was one of the first teenagers. We were invented so that our ‘never had it so good’ prosperity could be exploited by the teen-based industries that were springing up. We were told by the American generation above us that teenagers were rebellious, moody and difficult. So we became those things, though not in the house, because it wasn’t allowed. In the house you didn’t answer back, and you did as you were told, though you wore an outrageous teenage uniform which shrieked rebellion.

My own grandma was soberly dressed at all times. Sometimes I shared a bed with her, and in the morning I watched through half-closed eyes as she dressed – large brassiere, directoire knickers, vest, corset, full-length petticoat, stockings, dress, cardigan, wrap-around apron and slippers.

Just before she died I saw her bare legs for the first time. They had never been exposed to the sun. They were as purely white as the underside of a swan’s neck. Her hair was steel grey and crimped into waves by the metal curlers she wore during sleep. There were no cosmetics of any kind in the bathroom.

In fact, there was no bathroom.

Her word was law. If she had told her grandchildren to throw themselves into the canal we would have done so immediately, without stopping to remove our shoes.

I went to meet her from work, late one Saturday afternoon. The sun was streaming through the high factory windows. The air was full of floating white fibres from the white cotton socks that she helped to make, eight hours a day, six days a week. At the time I was enchanted. It seemed to me that my grandmother worked in a perpetual internal snowstorm.

Much to her alarm I turned down one of the roads marked ‘beatnik’ in the subdivision of the teenage highway which eventually opened up. ‘Beatnik’ incorporated most of the things I was interested in: jazz, cigarettes, Russian books, French films. There were very few beatniks in Leicester. I was one of four.

I bought the Manchester Guardian and read it secretly, with a dictionary to hand. I knew that one day I would be able to understand it.

I’m writing about my grandmother because, I think, I’m slowly turning into her. I’ve started to bake bread and cakes, and I steep cucumber slices in malt vinegar like she used to. When my husband is away I wear a long fleecy nightgown and bed socks. After years of prevarication I am now developing certain fixed opinions.

The turning point came when I was forced to take to my bed for six months in August of last year. Disc trouble and sciatica brought me down as violently as a rugby tackle. The pain was dreadful; it felt like a family of particularly sharp-toothed beavers was gnawing at my back and legs. Pain-killers and tranquillisers became grandma’s little helpers. These pills dull the wits and allow one to watch junk TV day and night. (Are the programme makers on the same pills, I wonder?)

On the few occasions when I left my bed, I was assisted by a stick. When my grandchildren saw me hobbling towards the lavatory, stick in hand, wearing a sensible nightgown and bedsocks, hair in need of a cut and dye, I think for the first time I became a proper grandma to them. And, when I briefly lost control of my bladder and bowels – incontinence is a dirty word, but double incontinence is even dirtier – I was entirely sympathetic to my two-year-old granddaughter’s struggle with toilet training.

I’ve taken it upon myself to inform my grandchildren about the natural world. These children are entirely modern – skilful with the video, the computer, the microwave and the mobile phone. But they are not totally seduced by technology. They are still full of wonderment that a dull-looking grey bean can transmogrify six weeks later into a beanstalk as tall as the house. And they are thrilled that they can actually eat the lettuces they have sown themselves.

Breadmaking is another satisfying activity (we like our food in this family). When we’re pounding the dough we talk to each other and I take the opportunity to indoctrinate them with my beliefs: kindness is the most important thing in the world, and good manners are a form of kindness. Socialism is good. Capitalism is bad. I am a shameless propagandist. I also play music while we bake. I am currently obsessed with Bach’s suites for cello, and the children seem to enjoy the sonorous sounds echoing around the kitchen.

I act as a buffer between their harassed, busy parents. If there is a dispute I am usually on the side of the child.

I am haunted by the feeling that I didn’t do the best I could have done for my own children. Though in my own defence, I remember shouting up the stairs to them, ‘Will you please stop laughing!’

Being a grandmother is giving me another chance to love and be loved by children. Last week I took a row of previously despised pearls from their box, and fastened them round my neck. When I looked into the mirror I saw Lillian my grandmother looking back.