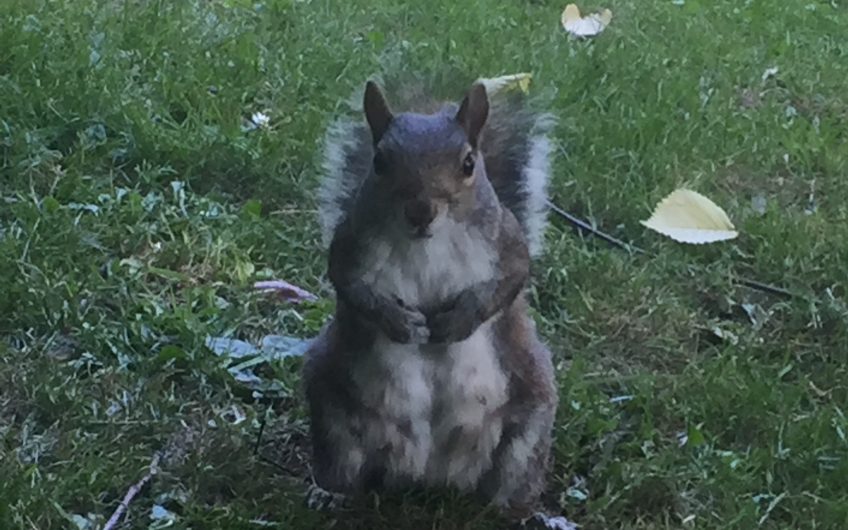 I'd just finished my lunch in Regent's Park – so the squirrel wasn't after food, and this is not a begging pose it's adopting.

I've never seen such a frightened animal, with those staring eyes, paws clutched together in nervy apprehension and tail stiff with anxiety.

Not that it was under threat – it approached me because I was sitting still and even got close enough for me to take this photo. I'd have thought that, compared to most animals in London or anywhere, squirrels have quite a nice life; certainly a nicer life than the animals caged in nearby London Zoo. Zoo animals have been shown to suffer considerable levels of stress and often display symptoms of severe anxiety including self-harm.

But meeting my new friend today made me think that, for all the freedom non-zoo animals enjoy, they have a much more worrying time than even the most worried humans in Regent's Park and neighbouring north London. And, as someone born and brought up in north London, I can tell you that the north London middle classes are some of the most anxious humans on the planet.

My squirrel was constantly looking around as he circled me and my bike – looking around for predators, and for fellow squirrels who might be territorial or sexual rivals.

My squirrel had never been taught the Green Cross Code and so has had to develop his own strategy for dealing with the mammoth Chelsea Tractors that come barrelling down through the park.

What a tough life. And imagine how much tougher it is for red squirrels: on top of the traditional list of squirrel concerns, they've got to deal with yet another worry – grey squirrels, like my new friend.

What is QAnon? By Richard Godwin