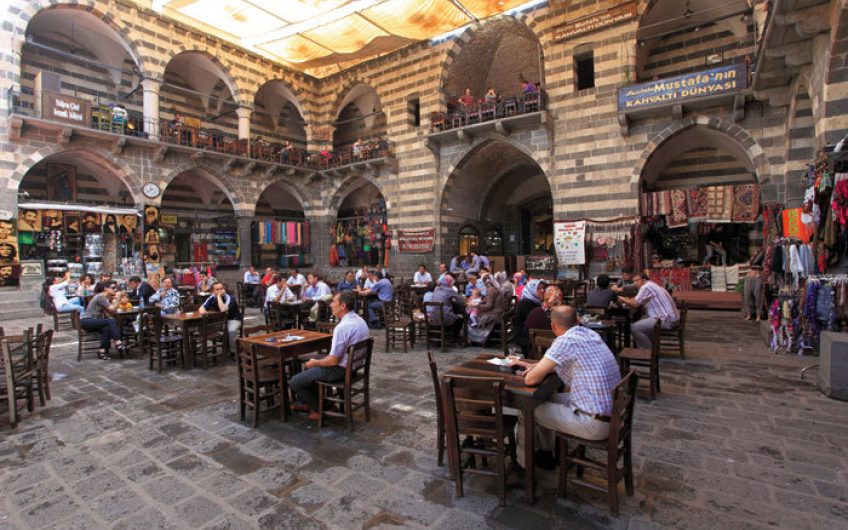 The Hasan Pasa Hani, a sixteenth-century caravanserai in Diyarbakir
View Full Size
1
of 1

With its ten graceful arches, the Ottoman bridge in Diyarbakir, the million-strong ‘capital’ of Kurdish Turkey, is known as the ‘Ten-eyed Bridge’. Below it, the muddy water of the Tigris rushes southwards towards the border with Syria and what local people still call Mesopotamia, the vast flat expanses of maize and sunflower growing on the reclaimed desert.

On the bridge sits an old man playing the zurna. The music is said to improve the fertility of the wedding couple walking across the bridge in full traditional dress. It is a soft moment in a hard uncompromising landscape, rocky and often treeless – a pretty hawk-featured girl with dark curls against a fragment of the Anatolian plateau. Behind the music is an echo of history – the massed ranks of hundreds of zurna players who marched at the front of the Ottoman army. The noise so terrified the opposition that at times they ran away before a shot was fired. But here and now, the piercing wail of this simple horn heralds only the wish for a child.

As the couple fold themselves into a relative’s car, a dingy armoured police vehicle trundles past with a water cannon on top. It does not look particularly impressive for this kind of hardware, but it is, nevertheless, the Turkish state in action. For Diyarbakir is a frontier town, an Alamo, as it has been, in various guises, for thousands of years. The war with the Kurds is technically over but an armed truce has taken its place. The population of Diyarbakir has exploded, with hundreds of thousands of displaced peasants trying to make a new life among the magnificent historic buildings and vast and intimidating black basalt walls.

Or has the war ended? When I was there the top television news story was that fourteen PKK (militant Kurdish) guerrillas had escaped from prison. Heading for their comrades in the Musguneyi mountains to the north east, they had dug a tunnel – with the cut barbed wire and a hole under the fence, it looked like a World War Two film.

Is this really a place for business visits or a holiday? It might seem not. But there is another way of looking at it. Unlike many of its neighbouring countries, Turkey works well. The buses are better than in Italy, the food is very good if you like Middle Eastern cuisine, there is wine (red, drinkable, made mostly by the Syriac Orthodox minority) and raki and hard stuff in the diminishing number of state-licensed liquor shops. Kurdish people are very pro-British as a result of the war in Iraq – perhaps unusual these days, but nonetheless useful to the visitor, as many speak some English having done civilian work in Iraqi Kurdistan, only a few hours’ drive east.

Internal flights from Istanbul are efficient and easy, but where do you stay? There are soulless modern hotels in the new suburbs, but so long as you can manage some steps (not many, but a bit steep and with nothing wimpish like a handrail) there is really only one choice for those wishing to explore the Old Town with its churches, mosques and historic edifices from every period. Diyarbakir started as Roman Amida and Syriac Amid, and the walls you see now began with Justinian, but the site has been inhabited since the thirteenth century BC, and was once part of the Assyrian Empire. Given that you come to the city to soak up history, it’s best to stay in a converted Ottoman han (caravanserai) like the magnificent Hotel Grand Kervansaray, a massive structure that has been in continuous use as a hotel since 1523. It shares its black basalt with the rest of the city, and has a fierce fortress quality (well, it’s Diyarbakir, isn’t it?).

In the han, where at one time hundreds of camels would have been tethered below your room, life moves around the sprawling open courtyards – geometric, mathematical lines of white limestone set in the basalt, severe and extraordinarily beautiful. As dusk approaches, the starlings quarrel on the roof. It is not a model of hotel management, but it’s clean and bug-free, there’s a nice swimming pool and the cell-like rooms with their low ceilings and small square windows might be in a mediaeval monastery. The hotel’s main business seems to be huge Kurdish weddings, so wonderful live music often drifts across the courtyard as you go to sleep. It reminds you that the mountains, with their uncompromising codes of love and revenge, are not far away. Like many places here there is no bar, but many Kurds drink alcohol in private and no one minds your duty free.

If you are not on a tour, venturing out needs a little prior planning. A tour is probably the best idea if you are a first-time visitor to eastern Turkey, but it is not essential – the hotels have plenty of bright young people with cars who speak English, and hire rates are not expensive.

A fixer is a good idea anyway, as the Old Town is a labyrinth and some of its unmissable sights are hidden in narrow back streets and alleyways.

Serious crime is low, apart from political killings, but pickpocketing is endemic and Diyarbakir people are notoriously good at it, at least according to urban mythology throughout Turkey. You don’t wander round at night, as William Dalrymple observed in From the Holy Mountain – but there is nothing to do then anyway.

The most famous mosque, the eleventh-century Great Mosque built by the Seljuk Sultan Malik Shah, is open to visitors but much of it is covered in scaffolding as part of the Ankara government’s restoration programme. It was a centre for the dissemination of ancient Greek medical knowledge after the Arab conquest of the city in 639 AD, and its thousand-year-old hospital still survives. The finest Christian monument is the Syriac Orthodox Church of Our Lady that was built as a pagan temple in the first century. Most of what you see now dates from the fifth century, after Christianity had been a radical movement in the pagan Empire. The building is well looked after with money from the big Syriac diaspora. The congregation is very small, although vigorous, after the war and persecution drove many Syriac believers into exile.

Conditions for Christians in the city are now calm. The old Armenian Orthodox church of Saint Giragos, which I had last seen in ruins when researching my book The Turkish Labyrinth in the early 1990s, has been rebuilt. But church security is tight and it is only a few hours drive to the border with war-torn Syria.

Locals take all this for granted, and Diyarbakir runs on adrenalin. There has always been conflict in and around this area but the Kurds, the Turks and the minorities are tough, resilient people and they find ways to cope, even in the worst periods.

With its brooding dark atmosphere and the longest walls after the Great Wall of China, this city is unique.

There is so much history. Just pass through one of the massive gatehouses in the walls and let it wash over you, like the sea.

The Hell of white goods deliveries