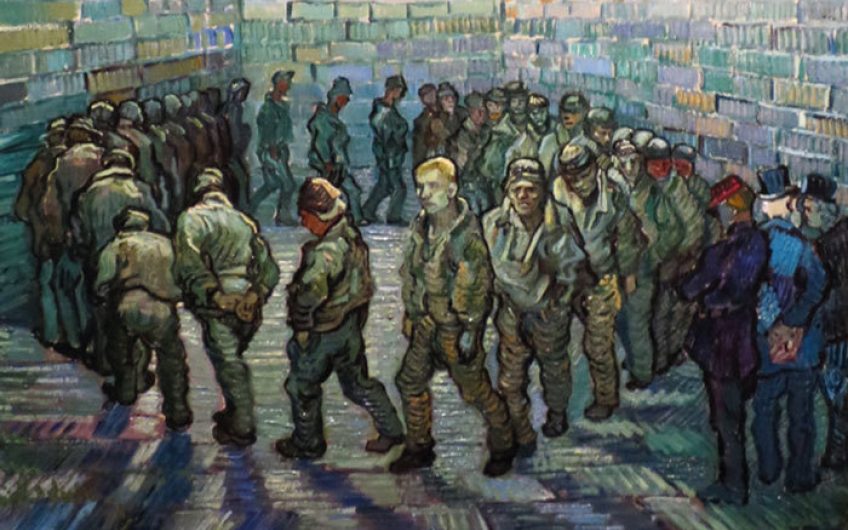 Prisoners Exercising [1890]. Van Gogh’s only image of London. It has been seen as a metaphorical self-portrait
View Full Size
1
of 1

A new van Gogh show, combined with a David Hockney exhibition, opens today in Amsterdam. Then, on March 27, the biggest exhibition of his works in this country for a decade will begin at Tate Britain.

More than forty of his pictures – including his only image of London, Prisoners Exercising (pictured), inspired by a Gustave Doré print of Newgate Prison that van Gogh owned – will appear in the Van Gogh and Britain show.

The exhibition concentrates on his time in London between 1873 and 1875, lodging in Brixton and working as an art dealer in Covent Garden. He had some success as an art dealer. But things went downhill when he fell in love with Eugénie Loyer, his landlady’s daughter. Already engaged to a former lodger, she rejected him and he went into a downward spiral.

The artist’s mixed fortunes in London are well known. What’s less celebrated is the happy time that followed, in a Kent seaside town.

A miserable van Gogh fled to Paris in 1875 but returned to England in April 1876 – for an unusually content spell in his life, in Ramsgate. Twenty-three at the time, he worked there as a teacher at a boys’ school. In May 1876, he wrote to his brother, Theo, ‘These are really happy days, the ones I’m spending here, day after day, and yet it’s a happiness and peacefulness that I don’t trust entirely, though one thing can lead to another.’

He was right to be distrustful. That time of real happiness and tranquillity was sadly short-lived. He killed himself in 1890, aged 37, after years of mental torment, obscurity and poverty.

In Ramsgate van Gogh was an assistant teacher, teaching maths and French. There was no salary, but he was provided with a room and board. When he accepted the job, while he was in Paris, he knew little about the Kent town, other than that it was a seaside resort of 12,000 inhabitants.

He immediately took to Ramsgate. He wrote his first letter home on 17th April 1876 – the day after he got there – to his mother and father: ‘There are 24 boys between the ages of ten and fourteen. (It was a fine sight, seeing those 24 boys eating),’ he wrote. ‘So the school isn’t large. The window looks out onto the sea.

‘After eating, we went for a walk by the sea; it’s beautiful there. There’s a harbour full of ships, closed in by stone jetties on which one can walk. And farther out, one sees the sea in its natural state, and that’s beautiful… what a good time we had.’

The views from his school, at 6 Royal Road, and from the promenade looking over the harbour are impressive today. As a Bradshaw’s Handbook of 1861, just before van Gogh’s time there, said, ‘The lawny esplanade that has been formed before the crescents facing the sea enables a promenader to obtain an ample sea view, and, the Downs being continually studded with shipping, the picture is generally extremely varied and animated.’

From the school’s bay window Vincent made two sketches of the seafront on the West Cliff (pictured). He boarded within close reach, at 11 Spencer Square, in a room, he remarked, in need of prints to adorn it. And from his description of the sky, seascape and light of Thanet – which had inspired J M W Turner up the coast in Margate – you can detect van Gogh the painter emerging.

A letter to Theo of 31st May 1876, describing a recent storm, displayed a keen eye: ‘The sea was yellowish, especially close to the beach; a streak of light on the horizon and, above this, tremendously huge, dark grey clouds, from which one saw the rain coming down in slanting streaks.’

The climate inspired both awe and melancholy. He continued, ‘That same night, I looked out of the window of my room onto the roofs of the houses one sees from there and the tops of the elms, dark against the night sky. Above those roofs, one single star, but a nice, big friendly one. And I thought of us all, and I thought of the years of my life that had already passed, and of our home, and the words and feeling came to me, “Keep me from being a son that causeth shame, give me Your blessing, not because I deserve it, but for my Mother’s sake. Thou art Love, beareth all things. Without your constant blessing, we can do nothing.”’

Van Gogh kept on being drawn back to the sea: ‘We go to the beach often; this morning, I helped the boys build a sandcastle like those we made in the garden at Zundert [his native town in North Brabant in the southern Netherlands].’

Not only had his posting satisfied his vocational streak, but Ramsgate felt like home. ‘This town has something very singular; one notices the sea in everything. But you know this special quality, too, because one finds it in the Hague and Scheveningen as well.’

Van Gogh left Ramsgate in June 1876, when the school moved to Isleworth, a town then outside London, across the Thames from Richmond. In the futile belief it would bring him a reunion with his beloved Eugénie, van Gogh moved with the school.

Ramsgate – a favourite destination of the young Queen Victoria in the 1820s and 1830s, and Karl Marx in the 1870s (his daughter Jenny Longuet lived here) – continues to attract visitors and new residents. These days, they are mostly ex-Londoners in their thirties who can no longer afford to raise a family in the capital. I myself am a Londoner who moved, a few years ago, to the pretty seaside town of Deal, ten miles south of Ramsgate.

The HS1 route has been a boon for the town since opening in 2007, as it has for all East Kent. Ramsgate – as little as an hour and 16 minutes from London – is now reasonably commutable to the city. It also attracts weekend dwellers and new settlers proper. Its seafront, with an abundance of restaurants, comes to life in the summer. The charming 1904 Royal Victoria Pavilion, derelict since 2008, was resurrected last summer as a majestic, delicate, classical Wetherspoons.

Other places worth visiting include Corby’s Tea Rooms and – for real-ale types – the Hovelling Boat Inn (both in York Street), and the many smart but unpretentious restaurants that have opened recently on Harbour Street.

Ramsgate may not have the artistic allure of fashionable Margate, with its Turner Contemporary art gallery; neither does it have that town’s extremes of wealth and poverty. It is largely – if quietly – affluent, and well-to-do Londoners will feel at home around Ellington Road (which leads to Waitrose).

Despite a grotty High Street, Ramsgate has retained and improved upon its Victorian elegance. As van Gogh discovered, it’s a refuge for people from all walks of life.

Patrick West is author of ‘Get Over Yourself: Nietzsche For Our Times’ (Societas)

Why Peter Finch was mad as hell

TikTok is for sale – but what is it?