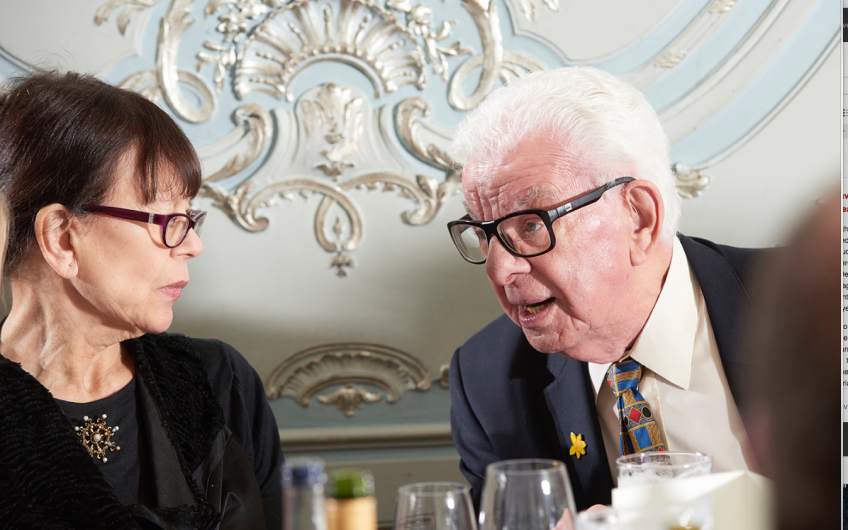 Tuesday’s lunch was – alas – the last to be held in the tasteful grandeur of the Savile, attended by such a lovely cast: guest speakers, Oldie contributors such as Dafydd Jones and Elisabeth Luard, and, of course, our revered readers. What a treat it is to meet the readers. David and Denise Cadisch were sitting to my right; he, at 86, is the oldest wages clerk in the country, one of five Cadisch generations to enter into the family business; she, a similar age, is a committed tennis player. Both were as bright as buttons.

‘Put your hand up if you went to an all girl’s boarding school?’ was Ysenda Maxtone Graham’s opening line. A quarter of the room (myself included) raised their arms. Her book, Terms & Conditions: Life in Girls’ Boarding-Schools 1939–1979, deals with the boarder’s life during that era. It was a time when housemistresses had a matronly – and militant – Victorian attitude to fresh air: windows were open all night and all year round. Words like ‘menstruation’ were just too embarrassing to utter. Instead, girls signed the ‘off games book’ (what Ysenda referred to as ‘the correct euphemism’). When it came to university, Ysenda said, the old-fashioned options were Oxford, Cambridge or you might as well forget it. But there was some consolation for these badly educated girls; they have made up for it with a lifelong addiction to Radio 4.

Virginia Ironside, twinkly-eyed Oldie columnist and newly appointed agony aunt, apologised for not being Clover Stroud, whom she was standing in for. ‘Instead you’ve got someone twice her age,’ she said. When she turned sixty, Ironside perused the bookshelves for something to ‘chirp one up’; she found nothing and assumed a gap in the market for a series of Granny-ish Bridget Jones stories. The books all have defiant titles: No, I Don't Want to Join a Book Club, No, I Don't Need Reading Glasses, Yes, I Can Manage, Thank You and No Thanks, I’m Quite Happy Standing. At 73, Virginia backtracks on these past statements: ‘I realise that those titles were all lies. I can’t manage, I can’t manage at all. I’ve just left a builder at home putting a rail on a wall in my house so I can get upstairs. I hate standing, I absolutely loathe it.’

Virginia rejoiced in a few of the positives of growing old; one being, you no longer have to make excuses to reject unappealing invitations like ‘Oh Virginia, would you like to come and watch my daughter play the oboe this weekend in a gazebo in the middle of January?’ Virginia’s older – and wiser – response is, ‘No, I’m sorry, I can’t. Well, I can. I just can’t face it; I’m too bloody old.’ Then there’s the answer, ‘Oh dear, how terribly kind. I wish I could come but I can’t. I have the electrician coming round tomorrow.’

Losing her place part-way through, Virginia apologised for ‘having a senior moment or, as a friend of mine calls it, a CRAFT moment – which stands for ‘Can’t Remember an Effing Thing’.

Virginia continued, ‘Do not wear white next to the face. It makes yellow teeth look yellower.’ She said this, staring at Martin Bell, the former war reporter known as ‘the man in the white suit’. (looking straight at him).

Martin Bell started his speech by saying, ‘You will have noticed that, as we reach a certain age, the years don’t just pass; they accelerate. The less we have, the more we spend. Life is like a roll of toilet paper; it unrolls more quickly at the end.’

Bell went on to recall starting his career in Vietnam, then reporting from Bosnia and, more recently, Syria. In his book War and the Death of News, he calls for an end to the ‘age of fake news’, despite it being part of ‘the world we live in’.

In other news, we are putting the Summer issue of the magazine to bed today, to be published on 21st June. In it, Wilfred De’Ath, The Oldie’s old rogue, is interviewed by William Cook, marking Wilfred’s 300th printed column in The Oldie. This anniversary unfortunately clashed with the temporary displacement of Wilfred's bankcard, resulting to an urgent plea for a cash loan from a phone booth at the Brittany Ferries departure lounge in France, to fund his return journey. The Oldie obliged and is delighted to report that Wilfred is back on British soil – residents of Cambridge, beware. Brigid Keenan judges a Swimsuit Competition for costumes designed for the older lady by young designers; and Alan Johnson writes a travel piece on Hull, where he has served as an MP since 1997, stepping down only last month.

What was The Iron Lung?