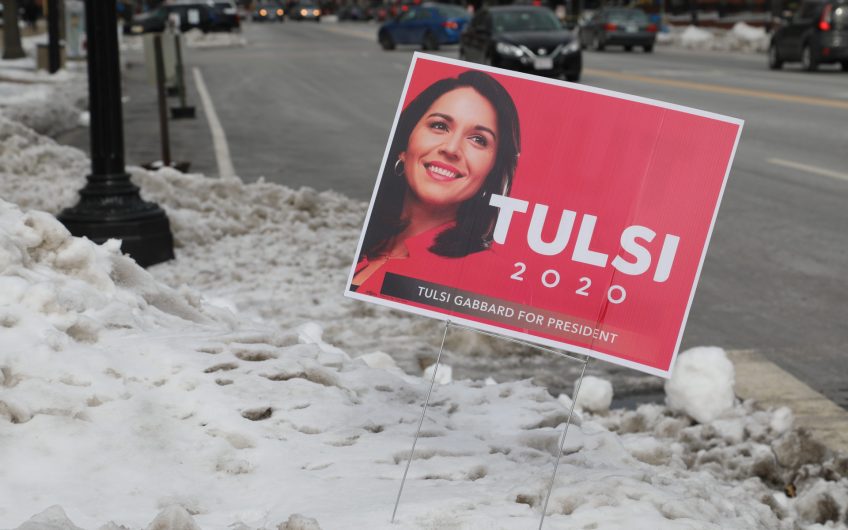 Manchester, founded in 1810, was named after our very own Manchester - and it was built as an industrial city in emulation of its ancestor.

Today, the Victorian mills are closed but there’s little sign of industrial decay. The mills and warehouses are now apartments and offices - and the place has a sort of cosy, old-fashioned feel to it.

And then, for a few days every four years, it becomes Politicstown. Every street corner is plastered with the face of Bernie Sanders, Elizabeth Warren, Tulsi Gabbard or the other candidates. It’s striking that, apart from a ‘Firefighters for Biden’ poster I spotted outside a fire station, Biden’s face, like his presidential prospects, is near invisible.

In downtown Manchester, the forecourt of the Hilton is covered with media tents and satellite trucks. Inside, the lobby is crammed with journalists, lobbyists and politics nuts. In one pretty back street, I found a vast ABC TV tower, 40-feet high, with two instant TV studios piled on top of each other, their arc lights shining out into the street below.

The candidates are everywhere, giving speeches at three or four events a day. On Saturday night, I bumped into Bernie Sanders in Piccola Italia Ristorante on Elm Street, dining with TV director Michael Moore. His chicken parmigiana did nothing to remove a shadow of complete exhaustion that hung over Bernie. He’s 78; he had a heart attack four months ago; and it’s subzero in icy New Hampshire. And he’s got to go on doing this till November.

Then, over all this, hangs the vast, orange shadow of the President of the United States. In a classic Trumpian gesture, he’s flying in to give a speech tonight at the biggest enormodome in town. There’s no reason on earth why a Republican President should appear at the Democratic primaries - except to steal the Democrats’ thunder and to draw in his supporters, who are already driving up and down Elm Street, leaning out of the window, screaming, ‘Trump! Trump!’

And then, on Wednesday, the whole circus leaves town and lovely Manchester returns to its calm, normal self - for another four years.