What does a herald do? By Patric Dickinson 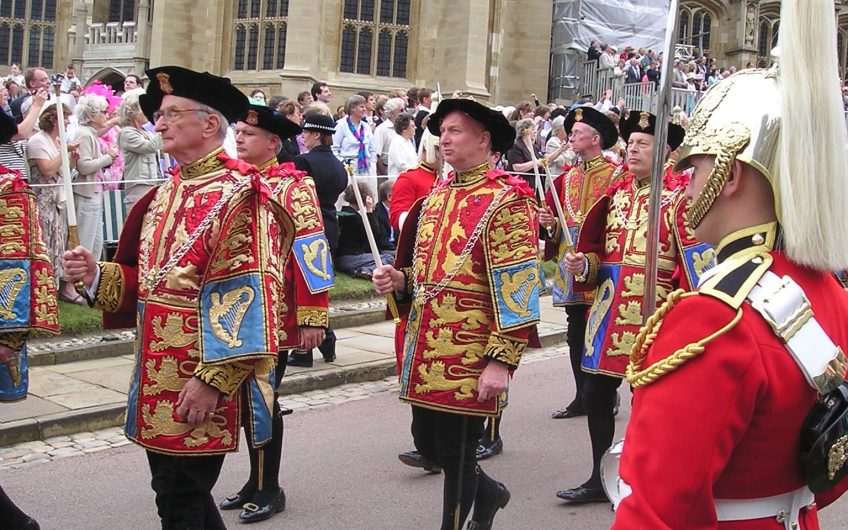 Heralds at the Order of the Garter Service at Windsor. Picture by Philip Allfrey
View Full Size
1
of 1

It is not every teenager who gets to meet James Bond within three days of starting his first job but that was my happy experience when I was taken on as a research assistant at the College of Arms in October 1968.

Preparations were under way for the film On Her Majesty’s Secret Service, in the course of which Bond impersonates a herald. The director of the film, along with the actor playing Bond (George Lazenby) and the actor playing a real herald (George Baker, better known for his later incarnation as Inspector Wexford), visited the College for a meeting with the then York Herald in the room in which I sat. An exciting moment for a geeky school-leaver.

At the time I had no idea that the other herald for whom I initially worked had himself been in MI6 for twenty years. Nor had I the faintest suspicion that my temporary employment at the College would last for more than half a century. After toiling there for 10 years, I eventually became a herald myself in 1978.

When asked what heralds actually do, I usually produce the rough and ready reply: ‘We design coats of arms, trace family trees and dress up as playing cards twice a year.’ And that in a nutshell is how my time at the College has been spent.

Heraldry itself dates from the 12th century, when the emblems appearing on shields in battles and tournaments came to symbolise not merely the individuals concerned but also their families. Crests (worn on helmets) similarly became part of the heraldic trappings. The word ‘crest’ is frequently misused to denote any heraldic motif but properly speaking describes the device that is placed above a shield. As a colleague of mine put it in a letter to The Times in 1994, “to talk about the whole coat of arms as a crest is like calling a house a chimney”.

From early on, heralds were given the job of keeping a tally on coats of arms. They indeed gave their name to heraldry rather than the other way round. Medieval heralds had a range of duties, organising tournaments, acting as messengers and participating in royal ceremonies. Coats of arms were only one of their concerns but, after the royal heralds were first incorporated by Richard III in 1484, heraldry gradually became their principal raison d’être.

Since 1555, the English heralds have had their home in the City, just south of St Paul’s Cathedral. The mansion granted to them in that year by Mary I became known as the College of Arms, the name given both to the building and to the corporate body of 13 officers of arms. The original structure was destroyed in the Great Fire of 1666, and the present College was built on the same site between 1671 and 1688, a handsome red-brick building that provides a vivid contrast to the modernity that surrounds it.

The 13 officers are known generically as heralds but are split into ranks - three Kings of Arms, six Heralds and four Pursuivants. I was appointed Rouge Dragon Pursuivant in 1978, being awarded the princely sum of £13.95 a year by the Queen. In my final role as Clarenceux King of Arms, my remuneration has been rather more substantial, fully £20.25 a year.

These official stipends (last increased in James I’s reign and reduced to their present levels by William IV in the 1830s) are obviously not sufficient to keep body and soul together, and we in fact derive our livelihoods from our professional earnings. What the College perhaps most resembles is a set of barristers’ chambers, each of us running his own practice in heraldry and genealogy whilst at the same time having a shared responsibility for the fabric of the College building and its records and collections.

Much of the business arises from generally addressed enquiries, most of which arrive by email via the College website (www.college-of-arms.gov.uk). But the College still opens its doors to the public between 10am and 4pm, Monday to Friday, and during those hours the officer on duty is available to deal with personal callers (or will be once Covid has been vanquished).

Every year, well over 100 new coats of arms are formally granted by the Kings of Arms who act under royal authority. Most of the grants are made to individuals living in England, Wales and Northern Ireland (there is a separate heraldic establishment in Scotland) but arms are also granted to a wide range of corporate bodies. The current cost of a personal grant of shield and crest is £6,700 (the grant fees providing the bulk of the College’s income), the end result being a handsome illuminated document on vellum. Once granted, a coat of arms is borne in perpetuity by the grantee’s descendants.

Not everyone is considered eligible for a grant. Some record of public service or professional attainment is normally required, but this is very broadly interpreted. It should indeed be emphasised that heraldry is by no means the preserve of the titled and famous, although my own clients have included three celebrated knights of the realm - Harry Secombe, Cliff Richard and Elton John – and no less a personage than the Oldie’s January cover-girl, Dame Edna Everage, whose shield displays a pair of gladioli and a depiction of Sydney Opera House and is supported by a shark and a possum wearing Dame Edna spectacles.

Dealing with Sir Harry Secombe, all-round entertainer and former Goon, was a particular delight. Secombe’s armorial achievement is full of the punning imagery that has long been a feature of heraldry. The shield contains wavy blue lines between two green ‘flaunches’, which suggest respectively the sea and a valley (or combe), thus providing a play on his name. A similar service is performed by the mermaid in the upper part of the shield, drawing a comb through her hair. She is balanced by a triton, shown blowing a conch, in allusion to Secombe’s singing skills. The swan in the crest adds a further musical reference; in association with the marine aspects of the shield, it also gives a nod to his birthplace, Swansea. Rather more straightforward is the sword, indicative of his military service (he joined up as a regular soldier before the War) and his work for the Army Benevolent Fund, which helped earn him his knighthood. No explanation is needed for the mask of comedy tied to the sword. The motto, GO ON, is deliberately ambiguous.

Brief reference should be made to the royal ceremonies in which heralds take part, wearing their colourful tabards - sleeveless coats displaying the royal arms. Almost every year they are on parade for the State Opening of Parliament and the Garter Service at Windsor. There are also a number of one-off events that they attend in full fig, most notably state funerals and coronations. This is probably the most glamorous and certainly the best-known activity of the heralds.

Now, some 52 years after my encounter with 007, I am finally hanging up my tabard. It has been a somewhat offbeat career, I freely admit, but not an altogether bad way of spending one’s life.