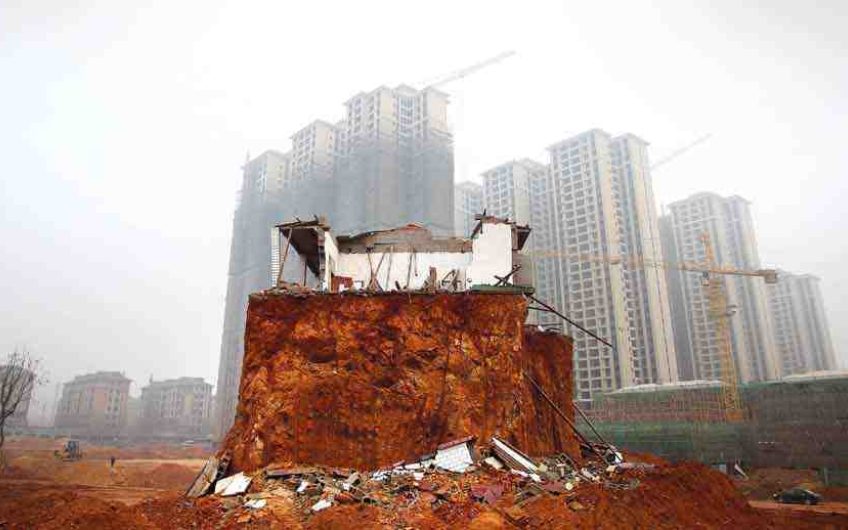 Representing an honouring of tradition in the face of constant modernisation, nail houses have become highly symbolic in 21st century China. By Deborah Nash

Don’t confuse a nail house with a nail parlour. A nail house is an old house that survives as new building development goes on all around it.

The name – from the Chinese dīng zi hù – is used by China’s property developers to describe the home of a resident who refuses to relocate and make way for a construction. They stubbornly hold on to their house like a nail sticking up in a plank of wood – hard to hammer down and very visible. So visible, in fact, that startling photographs exist online of lone houses marooned in muddy building sites, defiant outposts against the moneymen building the shopping mall or apartment block.

Nail houses began popping up in 21st-century China after the passing of two laws, in 2004 and 2007, recognising private property rights and the right to compensation, legislation inconceivable under Chairman Mao.

Before then, property-owners had little protection. The building of the Three Gorges Dam on the Yangtze River from 1994 to 2006 displaced 1.24 million residents and flooded 13 cities, 140 towns and 1,352 villages. There were claims that the compensation owed to farmers was never paid.

Thanks to social media, nail houses are difficult to conceal and can be lucrative for owners holding out for a generous offer. The most famous is the Wu family house in Chongqing. In 2004, a planned six- storey shopping mall in the city meant that 280 families had to move; the Wu family refused, despite the 3.5 million yuan (£390,000 today) promised to them.

The developers cut off the Wus’ power supply and water, and dug a 33-foot-deep pit round their house. The Wus responded by flying a Chinese flag from their roof and chatting to anyone who’d listen, including the press. Eventually, another compensation offer arrived, and the family left on the afternoon of 2nd April 2007. By evening, the Chongqing nail house was gone.

In a country whose architecture for centuries did not possess a single nail, the nail has suddenly gained significance. Nail houses are synonymous with the David-and-Goliath struggle between the little person and the authorities, between the antagonistic forces of progress and tradition, and between the free market and a Communist regime.

The existence of nail houses shows a positive development in law-making and awareness of one’s rights in China, as well as the courage to defend them. They are also a reminder of how much history, heritage and sense of place we flatten in the name of economic prosperity. The distinctive alleyways of Beijing (hutongs) have all but vanished from the city.

In London there are nail houses, too. A former jewellery-and-clock shop on Mile End Road, Spiegelhalter & Son, has been saved from demolition twice: once in the 1920s and again in 2015.

Architect and writer Dr Harriet Harriss says, ‘Much of modern development in London and elsewhere looks the same. It could be anywhere. It would be ironic if Spiegelhalter’s, a building that Hitler couldn’t destroy during the Blitz, was removed for ever now.’

What was Yorkshire Television? Remembering Austin Mitchell, the former MP, who's died at 86