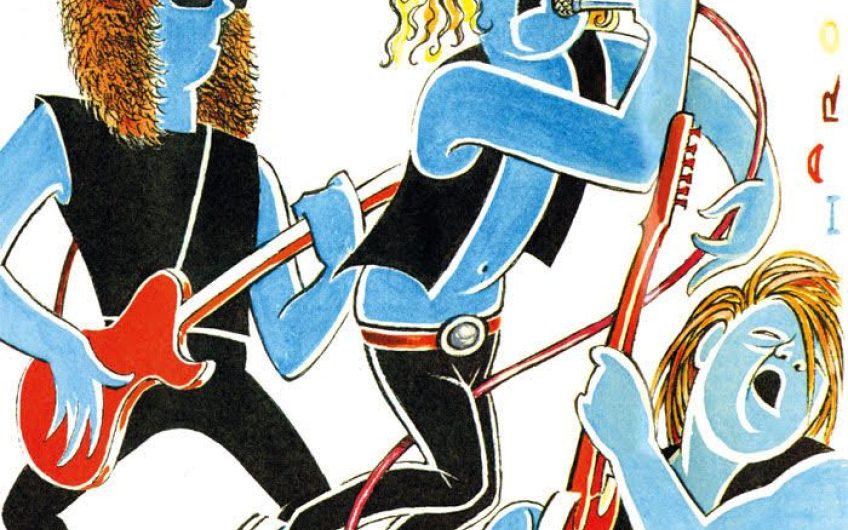 Jessica Berens charts the history of the brash rock genre

Heavy metal music was invented by a rock group called Led Zeppelin in 1969. It attracts a leviathan global following and spawns hit records without the advantage of either airplay or the enthusiasm of the mainstream record companies. It has long provided fairly amusing jokes for unchallenging comedians but, for all its uniformity, its predictability, and its imbecility, it still provides anthems for the outsider and exhibitionism for the shy. And herein lies the secret of its survival.

The term 'heavy metal' comes from William Burroughs's Naked Lunch and was compounded by the lyrics of Steppenwolf's Born to be Wild. Insinuating itself into popular language via America’s Creem magazine, it has come to apply to the professed ideology, attitude, clothes and extremely loud music of quartets of hairy men between the ages of 20 and 43. Requisites for a heavy metal group are long hair, long legs and short songs with titles such as Bring Your Daughter to the Slaughter. These will be accompanied by memento mori imagery inspired by the novels of Anne Rice (vampires) and Clive Barker (violent extraterrestrials), the doings of Nordic deities, and the more financially rewarding interpretations of Satanism.

Traditionally heavy metal groups hailed from building sites in the north of England and blew the electricity in provincial halls. Now, they are more likely to be spotted in Los Angeles, particularly in the Sunset Strip Tattoo parlour. The music has simplified since the Led Zeppelin albums, but its creators have split into subtle sub-divisions.

In Los Angeles there is the ‘glam’ scene, which is characterized by the wearing of lipstick, the bleaching of one’s hair, and the adherence to the philosophy of Betty Ford. ‘Speed’ or ‘thrash’ metal was coined to describe the velocity at which three chords were played; ‘widdly widdly’ defines the few who lean towards long guitar solos; and ‘funk metal’ denotes an addition of black dance rhythms to heavy metal’s battery of cranked-up guitars. Finally, and most ghastly, there is the ‘death’ metal scene of Florida where groups such as Malevolent Creation and Obituary write songs that dwell on anatomical details normally confined to autopsy reports.

This world is divided between those, such as Chuck Shuldiner of Death, who declare that their words and imagery are only a pose (‘I’m not a negative person. I like puppies and cats and life in general’) and those such as Glen Benton of Deicide, who has branded his arm with an inverted cross and claims his worship of the Devil is sincere. ‘Six or seven years ago I was at a ritual,’ he boasted to Sky magazine. ‘We massacred a bunch of cows. That was pretty experimental.’ The band, Carcass, reports the arrival of mutilated possums in the post (particularly upsetting to their drummer Ken who has a degree in ecology).

Some blamed for inciting suicide have been the victims of law suits instigated by people spurred on by the conclusion that if they were forced to listen to Ozzy Osbourne, they too would kill themselves. Ozzy Osbourne is, in fact, a nice man. He is also familiar with depression and alcoholic melancholy. Indeed, he has probably listened to his music and wanted to commit suicide. This is corroborated by his appearance on a documentary video in which he wept. He told the LA Times: ‘Rock stars like Paul McCartney release documentaries that play up all that prissy crap about how beautiful the pop star life is, but are all so fake. Nobody ever talks about what it is like when a band comes off the road and everybody has to check into detox centres. My fans deserve the truth.’

Those of philosophical bent must surely ask - why does heavy metal exist? The first thing to appreciate is that the music is only a minor part of the experience. Aficionados can, of course, tell the difference between the output of Megadeth and Anthrax, but it goes deeper than the middle ear. As Mother Nature makes teenagers spotted and sad so that they may live the rest of their lives with a sense of relief (divorce, bankruptcy - nothing is as bad as adolescence). So she laughs by inventing an imaginative pantomime of mating rituals. Looking like girls and singing about death is the human equivalent of feathers and call. Lemmy from Motorhead summed this up when he said, ‘I discovered you could get women to take their clothes off if you had a guitar.’ The irony is that girls are, by and large, unimpressed by this. The feathers and call of the heavy metal men are more likely to attract the 17-year-old virgin male. This genre of the ‘Devil’s Music’ may be criticized for being uncomplicated, but the anthropological undercurrents are many and bewildering.

When Wilfred De'Ath met the Archbishop of Canterbury