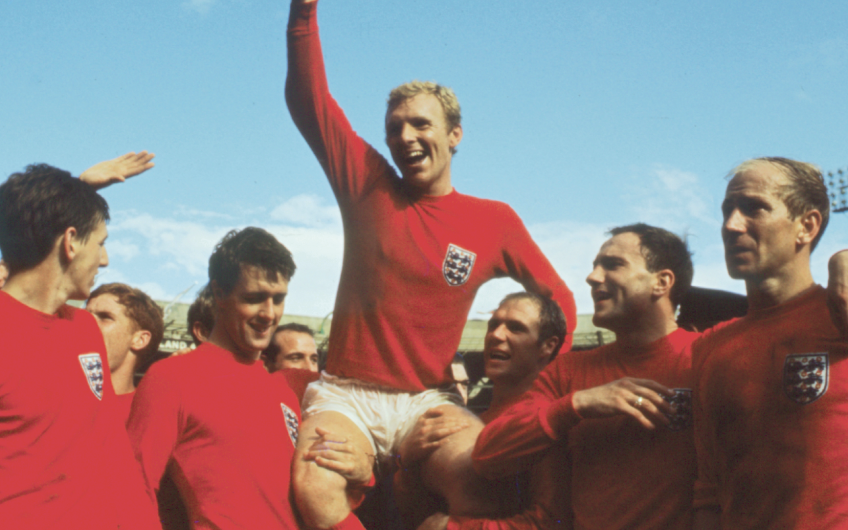 England won football’s greatest prize today in 1966. Ex-Arsenal and England captain Tony Adams recalls his taste of glory in 1998 and gives some winning tips to the current team

Playing for your country, as any athlete can tell you, is the pinnacle of your career. Clearly, the World Cup is a big deal for players and fans alike – as a small child, I was completely obsessed with the competition.

As an eight-year-old, I avidly watched the 1974 World Cup; in particular, Franz Beckenbauer and the Polish central defender Jerzy Paweł Gorgoń.

I even recently re-found the equivalent of a Panini sticker book which I religiously filled in with images and my handwritten notes on players.

I was convinced that playing for your country at this highest level and winning the World Cup – as fellow Dagenham boy Bobby Moore had done – was every footballer’s greatest dream.

My school pals Giles Jacobs and Marty Cook and I spent most of our school-lesson time studying the teams for the 1982 World Cup held in Spain. In 1986, I was only three years into my professional career and nowhere near the World Cup squad, although I did make my debut eight months after that tournament.

Personally, I had a disastrous 1988 European Championship. I came up against one of the all-time greats, Marco van Basten, in his prime, and I was a very inexperienced 21-year-old. This competition may have been the reason why Bobby Robson cut me from his squad of 25 for Italia ’90, along with my fellow Arsenal players Alan Smith and David Rocastle.

I was desperately disappointed and spent most of my summer drinking instead, as a way to deal with the pain; as I did four years later, when England failed to qualify for USA ’94. Then came France ’98. After the highs on the pitch at Wembley, reaching the finals of Euro ’96, and the lows of another penalty shootout and a booze- and pain-filled seven weeks, I was two years sober, and at peace with myself. Arsène Wenger had been in charge of Arsenal for two years. I love the man – he is the greatest of all Arsenal managers, and I wish him all the luck and love in the world now he’s left the club.

I was honoured to make Glenn Hoddle’s final squad and I knew, at almost 32, this would be my last chance. I was calm but excited. I was comfortable now in my footballing ability and felt I belonged at this highest of levels.

When we flew out to our base at La Baule on the west coast in our private plane, surrounded by security men, it all felt real and very, very big. I had captained Arsenal to trophies, and would do again after that summer, but I knew that this would be the summit of my international career. It is a very special tournament for players.

At La Baule, we had our own little village, with our own chalets – I shared with my Arsenal teammate Paul Merson – and an amusement arcade. I found it quite weird having an arcade centre all to ourselves – no queues, living the dream! – but you couldn’t get Merse and Mickey Owen off the car-driving games! Plus the obligatory golf course; manager Hoddle loved his golf.

Time before the start of the tournament and between matches is tough. We couldn’t really leave the compound – there’s too much interest in the players – and all of us missed our families. So, no cultural visits and no outside influences. After a long season playing football, boredom can settle in, alongside the anticipation. I did enjoy playing some cards – not for money – with Gareth Southgate and Teddy Sheringham.

It was during one of those cards sessions that we were talking about music, and we came up with the idea of dropping song titles into TV interviews. All of us had to give interviews, and it gave us the chance to have a little fun.

I can’t remember who won – I think I got some Diana Ross titles into mine, and Gareth managed a few George Michaels. No wonder journalists were confused by some of our answers – until Alan Shearer, cleverly and comically, gave it away, having been put on the spot by Ray Stubbs when asked about the game point-blank. ‘It’s just your imagination,’ he said.

I was more nervous getting the titles in than playing the bloody match! You can get bored in these camps – though I was happy in my own company and was reading for fun – so you need some lightness.

At the time, there was a lot of rivalry between Arsenal and Manchester United, but I never felt they were my enemy within the England team. The rivalry is on the outside; once you’re together, you’re together. It all felt enjoyable to me, and we all loved our country and wanted the best for the nation.

Naturally, people from the same team, such as Manchester United’s David Beckham and Gary Neville, were going to be tight in their own company. I didn’t need to build any new relationships; I knew David, and his parents knew my parents. Also I had known Teddy since we were fourteen. And most of us had been together internationally for a good couple of years before France.

As for the tournament, it was all very exciting. I must say that I loved every single minute of it and feel grateful to have played my part. However, in my opinion, Glenn did not surround himself with enough experience and people who knew what finals tournaments were all about. At Euro ’96, Terry Venables had big characters in Bryan Robson and Don Howe to support him. Glenn’s assistant was John Gorman. John was a good man, but he had never operated at this level before. Tournament experience is vital – the pressure builds, and the fitness and preparation is totally different than at club level. It’s almost a totally different game.

Then there was the Beckham situation. Glenn seemed unsure about him, and I know David felt humiliated in training when Glenn decided to show him how a free kick should be taken. Naturally, Glenn put it in the top corner.

Glenn was and is an exceptional coach but he was only 41 at the time of this tournament and he liked to prove he still had it. With me, he put me through an exercise in training that felt like he was trying to show me up: it was a passing drill using both the left and right feet. I think Glenn thought my left foot wasn’t as good as my right. But I came through enough for him to pay me the compliment of saying how much I improved.

Also, there was the captaincy issue. When Glenn took over from Venables, he made Alan Shearer captain, giving me the reason that Alan would get more penalties. I disagreed but accepted his decision.

Any inconsistencies and inexperience in a team are fine against weaker opposition. We were technically superior against Tunisia in Marseille and it showed: we won 2-0. I savoured it, knowing that my family were seeing me in a World Cup and I didn’t have to worry about getting them tickets. However, my Dad had emphysema, and his seat was at the top of the Marseille stadium. I think by the time he got to his seat the match was over.

We played poorly in the next game, losing 2-1 to Romania. I felt we had a weakness down our left flank having changed our formation from offensive wing backs to defensive wing backs. The exclusion of Stuart Pearce had left a hole in the team. It meant we had to beat Colombia, and Glenn had little choice but to heed the clamour from the public for David Beckham and an 18-year-old Michael Owen to be included.

Naturally, David scored with a free kick and we won 2-0. We had made the knockout phase, but in second place in the group. It meant we would be playing Argentina in the last sixteen. It would turn out to be one of those epic games for the national team that linger in the memory.

I was up against a front pairing of Gabriel Batistuta and Hernán Crespo. It was a challenge I relished and I really thought we were going to win the game. Funnily enough, I would bump into Hernán again when the Chinese company for whom I was an adviser bought Parma in Italy and he was an ambassador at the club. Small world!

That feeling of winning grew when Michael scored that wonderful goal to put us 2-1 up. Mind you, the defender in me was watching Nelson Vivas backing off and thinking that his body shape was all wrong, that he was too square on. Only later did I appreciate what a special goal it was. Even when Argentina equalised, even when David was undeservedly sent off (I wasn’t angry at all; it was unfortunate, but we were all doing our best and it was a great occasion), I still thought we would win.

But penalties proved beyond us yet again. Who knows what might have happened had David stayed on, had tough old Diego Simeone not manufactured a reaction to a slight kick. I do think the treatment of David early on in the training camp, coupled with his youth and relative international inexperience, had a bearing on his mental state. Small details again.

It had been a phenomenal game, the England fans adding to the vastness of the occasion. This time, unlike after our exit from Euro ’96, I felt at ease with myself and there was no need to embark on a drinking bender for the rest of the summer. I had played well and acted with dignity and integrity. And this, through my experience, would be my advice to the young men representing England at the next World Cup, if we qualify. Enjoy it, of course, because it could be your only World Cup finals (though, with our selection choices dwindling, there are a few players who could play three or four tournaments and break Wayne Rooney’s England outfield-player caps record of 125). And play with dignity, pride, passion and integrity.

Above all that, win or lose, understand how to handle the situation, emotionally and mentally. Teammates who are composed and confident at home in the Premiership can wilt under the World Cup pressure; others can rise. Everyone has to be ready – players, coaches and all the staff – for the energy, the trepidation and the madness that goes with a World Cup tournament.

What to do with your Royal Garden Party hat