What languages did Jesus speak? 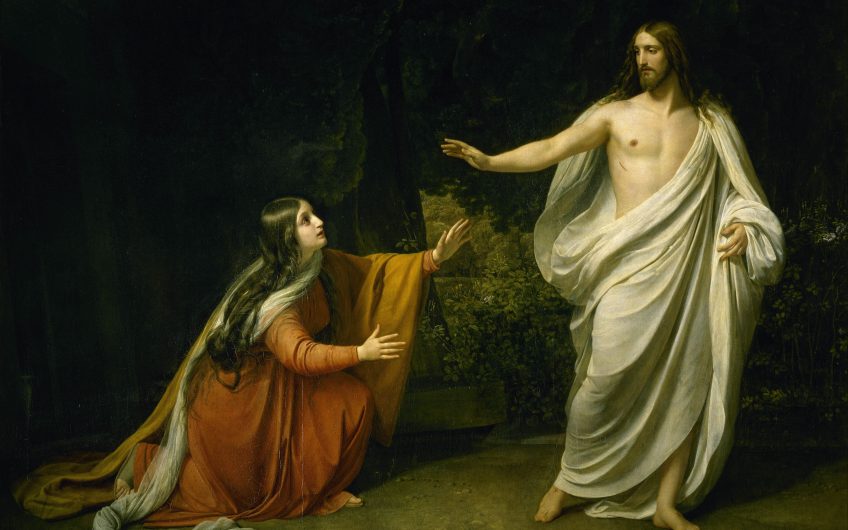 The Latin 'Noli me tangere' should really be the Greek 'Me mou haptou'. Alexander Ivanov - Christ's Appearance to Mary Magdalene after the Resurrection. Source: pwE-qeOqtCvCTg at Google Cultural Institute
View Full Size
1
of 1

The world's oldest Christian letter, written in Greek in Roman Egypt in 230 AD, has just been discovered. Among his many languages, Jesus spoke Greek, says Harry Mount

During the First World War, a pacifist teacher appeared at a British military service tribunal. “I want to turn the other cheek,” the teacher said, “if you don’t mind me translating from the Greek of the New Testament.” “Greek?” the blustering Colonel Blimp of a tribunal chairman replied. “You don’t mean to tell me Jesus spoke Greek. He was British to the backbone!”

Jesus may not have spoken English but he was certainly quite a linguist.

In 2014 in Jerusalem, Pope Francis had a good-natured disagreement about Jesus’s language skills with Benjamin Netanyahu, the Israeli prime minister. “Jesus was here, in this land,” Netanyahu said. “He spoke Hebrew.”

“He spoke Aramaic, but he knew Hebrew.”

They were both right. Jesus’s first language was Aramaic – still spoken in places in the Middle East, including Maaloula, near Damascus, the town battered in the Syrian civil war in 2013. Until the war broke out, Melkite Greek Catholic and Orthodox Christians had lived happily alongside Sunni Muslims for centuries.

In Nazareth, Jesus spoke Aramaic’s Galilean dialect. Jesus’s last words on the cross were in Aramaic: “Eli, Eli, lama sabachthani” – “My God, my God, why have you forsaken me?”

Jesus read Hebrew from the Bible at the synagogue in Luke 4:16. He chatted, too, with a Syrophoenician woman, who would have spoken Phoenician. And he was also very familiar with Greek.

As poor Greece recovers from a disastrous 10-year recession, it’s worth remembering the crucial role Greek played in Christianity. It’s tempting to think of the New Testament as a story of the Holy Land – of a Jewish Jesus in a Middle Eastern country, controlled by Latin-speaking Romans.

But Jesus and his disciples used the third-century BC Septuagint, the Greek version of the Hebrew of the Old Testament, translated by 70 – or, in Latin, septuaginta – Hebrew scholars.

The New Testament – which Oscar Wilde said was the most beautiful book he’d ever read – was written in Greek, even if it was composed under Roman rule. Whatever languages Jesus spoke, his words in the New Testament were written in Greek – including lines now more familiar in Latin. “Noli me tangere” – “Don’t touch me!” – Jesus said to Mary Magdalene after the Resurrection. In fact, the Greek of John 20:17 reads “Me mou haptou”. A better translation is “Stop clinging to me.”

Greek was spoken by senior administrators in the Roman Empire. Julius Caesar’s last words weren’t “Et tu, Brute?” They were “Kai su, teknon?” – Greek for “Even you, my child?”

Ancient Greek was the native language of Roman citizens such as St Paul, from Cilicia in south-east Turkey. Early Christians were largely Greek-speaking, too. That’s why, to advertise their faith, Christian martyrs in ancient Rome scored the catacombs on the Via Appia with fish symbols. The Greek for fish is ichthus, the acronym for Iesous Christos Theou Uios Soter – “Jesus Christ, Son of God, Saviour”.

When Christianity reached these shores centuries later, it was still wrapped in Greek clothes. At a Roman villa in Chedworth, Gloucestershire, built in the fourth century AD, the coping stone around a basin is inscribed with a Chi and a Rho, the first two Greek letters of Christ’s name.

Greek continued to frame the terms of religious discussion in Europe over the next 1,200 years. William Tyndale’s first English translation from the Greek of the New Testament in 1526 echoes down the ages today in the unlikeliest of places.

When Islamic extremists murdered the soldier Lee Rigby in Woolwich in May 2013, one of them screamed: “An eye for an eye, a tooth for a tooth.” He was unwittingly echoing Tyndale’s 1526 translation from the Greek of Matthew 5:38.

Bob Dylan also borrowed from Tyndale’s Greek translation in The Times They Are a-Changin’: “And the first one now will later be last, for the times they are a-changin’.” Tyndale’s translation of Matthew 20:16 read: “So the last shall be first, and the first last: for many be called, but few chosen.”

When I travelled in Odysseus’s footsteps around the Mediterranean four years ago, I felt almost as close to the Bible as I felt to Homer. There are three primordial roots to Western European thought – classical, New Testament and Old Testament – and ancient Greece is at the heart of the first two.

In a talk to the English Speaking Union in Houston in 1977, Margaret Thatcher, then Leader of the Opposition, echoed the point. The “common heritage” of British and American ideas depended, she said, on Christian values, which in turn “rest on Hebrew and Hellenic foundations”.

Through understanding ancient Greece, you don’t just understand the classical world; you also begin to appreciate the Greek roots of Christianity.

Courtroom drama: barristers take to the stage in the natural theatre of the Old Bailey

The Fall of Dr Harold Shipman