What was The King’s Christmas Pudding? - Kaori O'Connor 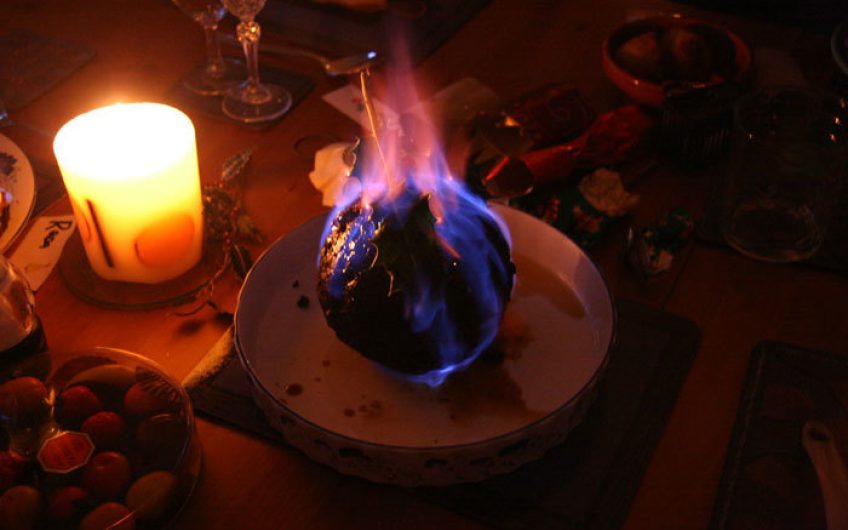 On Christmas Day 1927 King George V and the royal family sat down at Sandringham to a festive dinner that finished with a Christmas pudding so special it was hoped it would save the Empire.

Christmas – particularly as popularised by Charles Dickens during the Victorian heyday – was the most British of holidays, and at its heart was the Christmas pudding: the spiced, fruit-filled pudding steamed for hours and brought proudly to the table ablaze with brandy. Wherever they went in the world, the British took their Christmas with them, and Victorian journals abound with accounts of Christmas puddings carried to New Guinea and cooked by immersion in springs of boiling mud; of feasting in the Australian bush on roast kangaroo followed by pudding; of struggling through the Burma hills on foot in full evening dress for the sake of a slice of Christmas pudding. Those without puddings from home, improvised. There were puddings made in the South African veldt from ostrich eggs, and puddings confected in the Canadian wilds from crackers and moose fat. Even at the height of the First World War, it was possible to order Christmas hampers with a pudding to send to prisoners of war and to soldiers on the battlefields, and back in Britain when wartime shortages were at their height, people carried on making Christmas puddings from whatever was available, sometimes little more than carrots and breadcrumbs. There must always be an Empire, Christmas – and pudding.

But a shadow was cast over nation and Empire by the troubled times that followed the war – currency crises, unemployment, trade deficit, war debt, shortages, social unrest and a worldwide economic depression. Cheap non-Empire-made goods were flooding the markets, Empire countries who had fought in the war now wanted protection for their products, Empire unity was under pressure, and it was decided the government should promote economic self-sufficiency and unity through encouraging the use of Empire goods. In 1926, the Empire Marketing Board (EMB) was created to do this, but encountered resistance. Why should people buy Empire-produced goods when cheaper ones were available?

The EMB needed to capture public imagination and loyalty, and they did it with a pudding. In order to support the Empire goods campaign, King George V had let it be known that the royal Christmas dinner of 1926 would consist only of foods produced within it. The royal meal attracted enormous popular interest and, seeing a golden opportunity, the EMB asked the palace if, for 1927, Their Majesties would permit the royal chef to provide a recipe for a Christmas pudding using only Empire ingredients – currants from South Africa instead of the Levant, oranges from Australia instead of the Algarve, and so on – with the recipe to be given out free to the public, to spur purchases of Empire goods. It would be an unprecedented opportunity for the public to eat as the royal family ate, and do the Empire good as well.

Once the royal recipe was in hand, representatives of the different Empire countries battled behind the scenes to make sure their products were included, since many produced the same ingredients. The final pudding had rum from Jamaica as well as brandy from Cyprus to satisfy both countries, and ‘pudding spice’, which was not in the original royal recipe, was added only as a way of getting India in. The royal pudding ingredients were conveyed to London’s Mansion House in decorated cars with costumed attendants, and stirred up in an elaborate ceremony captured in newsreels shown throughout the Empire. Requests for the royal recipe flooded in by the thousands from around the globe; it became the most famous recipe in the world, and the sales of Empire produce soared.

On Christmas Day 1927, in an act of pudding patriotism and culinary communion, people the world over sat down to partake of the King’s Christmas pudding, which remained a fixture of the holiday season throughout the interwar years. In a world that would soon change out of all recognition, the King’s Christmas Pudding made the Empire one large family, if only for a day.

Will students be priced out of university?

Henry Cooper – Knight of the realm and local greengrocer