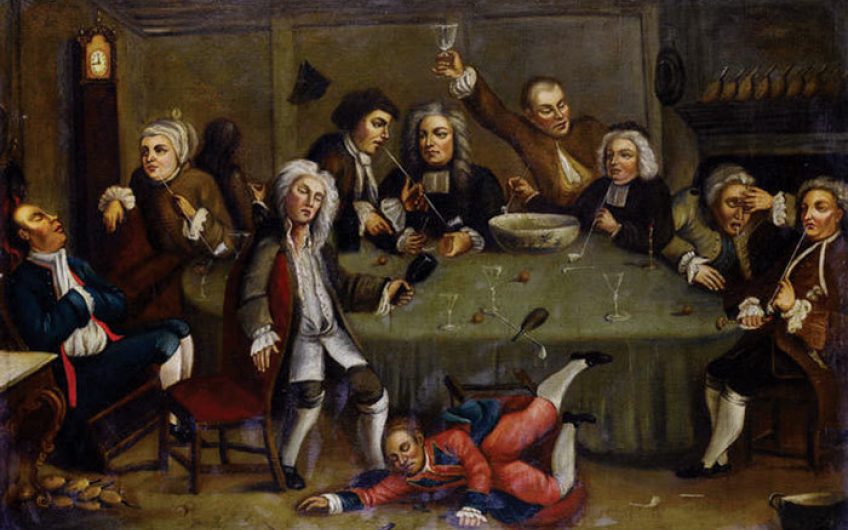 And yet, in the late 17th century, they were the launchpad of political freedom, literature and art. Far from being the dominion of Tory aristos, they were manned by a middle class, growing in size and confidence. Joseph Addison, the first editor of The Spectator, wrote: ‘We take all occasions and pretences of forming ourselves into those little nocturnal assemblies which are commonly known as clubs.’

We were determined not to fall under the tyranny of another Cromwell or Jacobite successor. Encouraged by the Bill of Rights, England and Scotland rejoiced in their new-found freedom of expression by forming an estimated 12,000 dining clubs of up to forty members. Given that at least half the clubs met in London, where, in 1760, there were 20,000 men who had the vote due to their owning the requisite freehold worth forty shillings or more, it is fair to assume that pretty much every eligible London male attended a dining club during the 18th century.

The dining clubs helped to shape and secure the emerging new parties: the Tories, who formed themselves into the March and October Clubs, and the Whigs, who formed the Hanover Society. Its thirty Whig MP members met to secure the Hanoverian line far away from Westminster’s Jacobite sympathisers. Swift formed the Scriblerus Club, which inspired The Publick Spirit of the Whigs. In 1817, the Hampden Club issued the first demand for universal male suffrage. Although dining club memberships were restricted to men, Elizabeth Montagu held breakfast gatherings of the Blue Stockings Society for women, at which eminent figures like David Garrick would give talks.

Most emblematic of this defiant trend for demonstrating political freedom through a protruding belly were the various Beefsteak Clubs, the first of which started in 1705. Under John Wilkes’s rallying call of ‘Beef and Liberty’, they sprang up throughout the 18th century in Dublin, Cambridge and Oxford. In 1712, portly John Bull and patriotism were born. Beef, as much as free speech, was seen as an Englishman’s right – something the scrawny soup-eating French, languishing under the tyranny of an absolute monarchy, could only dream of.

I’m glad to say there were some silly clubs, too. There was a Farting Club, where members met ‘once a week to poyson the neighbourhood’; a Lying Club, where no true word could be uttered; a Spit-farthing Club where one imagines hawking was celebrated; an Everlasting Club, which sat 24 hours a day, seven days a week – one member had to be always present; a Surly Club, whose members swore to abuse each other at every meeting; an Ugly Club, of which Wilkes was president; and an Unfortunate Club, for bankrupts.

Dining clubs were also formed to promote the arts by introducing aristocratic patrons to artists and writers. The Kit-Cat Club was started in the 1690s by Jacob Tonson, a shrewd publisher who attracted writers down from their garrets with the bribe of one of the Cat and Fiddle’s famous pies. He then asked for first refusal on their books.

The Club (its full name), which was founded in 1764 by Joshua Reynolds and was quickly joined by Samuel Johnson, Edmund Burke and Oliver Goldsmith, also encouraged the new breed of writer, who could, for the first time, live off his work rather than aristocratic patronage. It met once a week at the Turk’s Head in Gerrard Street. David Garrick, Edward Gibbon and Sheridan were all members in the 18th century; Tennyson, Macaulay, Huxley, Gladstone and Lord Salisbury in the 19th century. It was still going in the early 20th when Rudyard Kipling was a member. When Churchill and F E Smith were turned down, they formed the Other Club in 1911.

Even now, dining clubs abound in London, but few members will be striding around in white-lapelled tail coats.