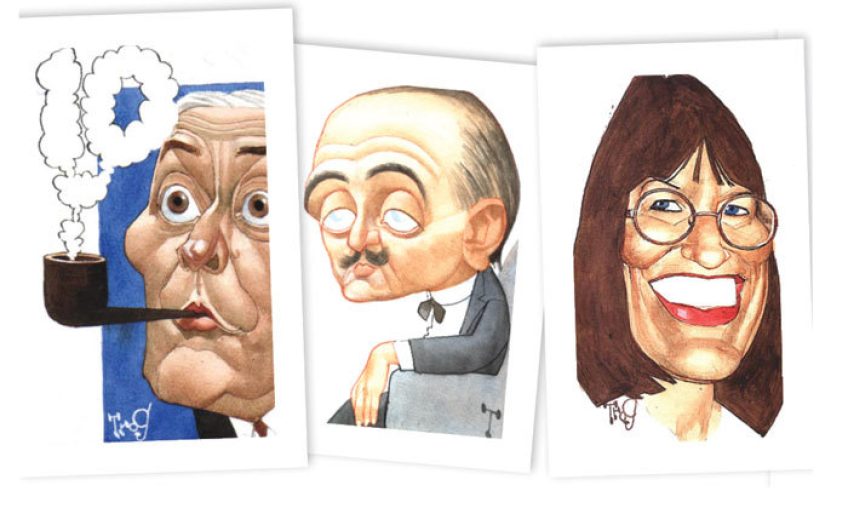 TROG – aka Wally Fawkes – was a regular Oldie illustrator, drawing a caricature for the books pages every month between 2001 and 2005 before failing eyesight forced him to retire. Margaret Crick met the veteran political cartoonist.

Wally Fawkes, the political cartoonist Trog, had an oldie moment recently when he was at the doctor’s surgery for his flu jab. ‘I was in the waiting room with a lot of slightly apprehensive elderly people in various stages of decay when over the speakers came a faint sound of music. Suddenly the Nelson Riddle strings filled the room and the next thing we heard was Sinatra singing “And Now the End is Near”. We all looked at each other and exploded with mirth.’

Fawkes turns 95 today, having retired after sixty years as a cartoonist because failing eyesight meant he could no longer see well enough to draw. He is sad there are politicians coming onto the stage whom he’s never cartooned, like David Cameron. His compensation is being able to draw on his other prodigious talent, that of being a jazz musician. ‘I think I would be a bit sadder about the whole business if I didn’t have the clarinet playing, but it’s a very good outlet to have.’ He is self-taught, saying the instrument took him up when he was eighteen, in the Benny Goodman era. When Fawkes heard the clarinettist Sidney Bechet he was ‘swept away’. He says all he knew about the clarinet was that you blew down the narrow end; but it wasn’t long before Bechet was describing him as one of the world’s best.

His first band was the George Webb Dixielanders, to which he recruited the trumpeter Humphrey Lyttelton, then an art student. Lyttelton returned the favour in 1948 when he formed his own band and Fawkes was a founder member.

The two played together for years; but eventually Fawkes found there was a conflict between the pressure of touring every weekend and his Fleet Street day job. ‘I was getting further and further behind, and I had to make a decision to keep the music for pleasure and the cartoon drawing as a livelihood, because unless you’re a band leader you don’t make much money out of music.’ He still plays today.

Many musicians have begun their careers at art school and Fawkes thinks there’s a empathy between cartooning and jazz. ‘You’re drawing in the air really. With jazz, you’ve got to keep to the same chords and get them right, but you start improvising, as with a caricature. The clarinet and the pen are similar: with the clarinet you depend on the reed at the end, and with a pen it’s the nib. You dip the nib into ink and you dip the reed into your head. The artist whose drawings most look to me like music is Quentin Blake – he’s one of my favourites.’

Art was his first talent and he knew he loved drawing from childhood. At fourteen he won a scholarship to Sidcup Art School. His promising art student years were cut short by the War, and he was forced to leave and earn some money for his family who had sailed to Britain from Vancouver during the depression years, ‘unaware there was a depression here too’. His first job was to camouflage a factory in Woolwich. ‘I spent all summer doing it and then it was bombed; I got a rejection slip from Hitler – the severest criticism I ever got.’ From the remains of the bombed-out factory, Fawkes rose again by winning a competition sponsored by the Coal Commission (who employed him to trace maps of coal seams). The competition entry had depicted a boxer apprehensively approaching the ring. ‘I was into boxing then; I was very aggressive in those days.’

Luckily for Fawkes, the art competition judge was Leslie Illingworth, the Daily Mail’s political cartoonist, who became his ‘fairy godmother’, giving him his first newspaper job. ‘I started on the Mail on my twenty-first birthday doing little column breakers. Leslie was the great man in my cartoon life.’ Fawkes took the pen-name Trog from his band’s nickname, the Troglodytes, and returned one day a week to art school, this time Camberwell, where he was taught by John Minton. Three years later, the Mail asked him to draw a strip cartoon, for which he created a small woolly creature called Flook, who became a household name. Originally meant for children, the strip evolved into a gentle satire and political commentary and was written by colleagues including Lyttelton, George Melly and Barry Took. It lasted thirty-five years, by which time Fawkes had become disillusioned with the paper’s politics and was contributing cartoons to the Spectator, New Statesman, Punch and – in the Seventies – to the Observer, for which he drew two cartoons a week, one for the leader page and a ‘Mini-Trog’ for the front page.

His friendship with Lyttelton – whom he recruited to the Mail – has lasted a lifetime. Lyttelton describes him as ‘tall, placid and easy-going, with a deep-rooted aversion to anything which threatened to make life complicated… and a Groucho Marxian sense of humour... He doesn’t believe in speaking one word when none would do.’

Fawkes thinks good cartoonists need highly trained graphic skills and political awareness, but he doesn’t believe in taking work too seriously. ‘It’s just part of the paper which is fish and chips the next day.’ Nevertheless, his originals are sought after by many politicians, including the jazz-loving Ken Clarke, who says Trog is his favourite political cartoonist. ‘When I was a small boy I was a fan of Flook... Probably my favourite Trog – although it’s not terribly flattering – is of John Major and myself as a couple of beached whales.’ Trog returns the compliment by saying the Tories should have put Clarke in control after Thatcher, although his own leanings are to the left. ‘I’m all for the left being sensible, or at least regaining its senses. I like New Labour but not the present leader. I’ve done lots of cartoons of Blair, week after week, and I think that’s what drove me blind.’

What’s my First worth?