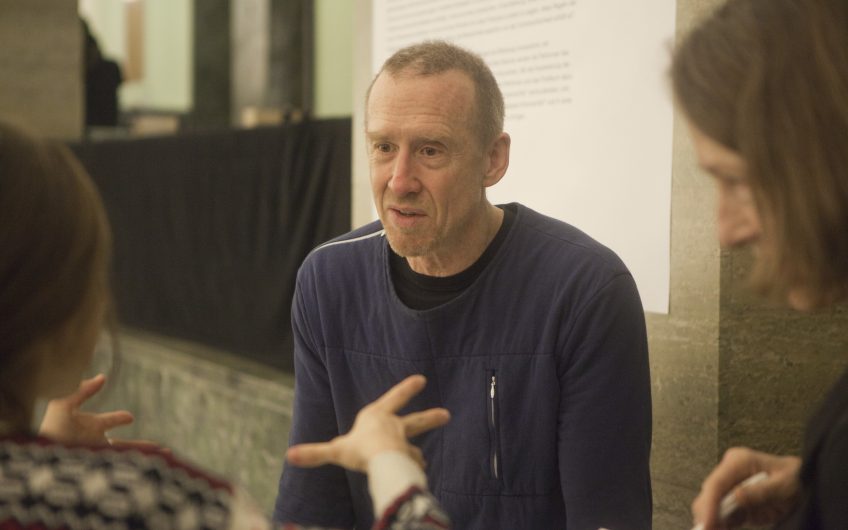 A great artist, at 70, still brimming with vigour and energy (to judge by the way he bounded up the aisle at the start of the show to take his place behind the lighting desk) has earned the right to do what he wants.

This is, after all, the legendary American choreographer William Forsythe, who will complete his seventh decade on December 30th of this year. He’s in New York with a group of his most trusted collaborators to perform at “The Shed”, a brand new arts center on what was, until recently, the last remaining rough patch of Manhattan’s once-industrial West Side.

And to mark the event he has chose to offer us what he has titled ”A Quiet Evening of Dance.” Knowing this great artist’s commitment to shock, surprise and subvert his audience’s expectations, from the outset you suspect that something more challenging than gentle entertainment lurks beneath the name.

But, it turns out, quiet is exactly what we got, at least at first. Not silence exactly (that would be too predictable for Forsythe) but rather gentle birdsong that filled the auditorium as we took our seats. This rather lovely background track continues as the house lights dim, and two dancers appear on a giant white rectangle, softly lit so that it seems glow—it appears to hover in two dimensions against the deep black of the stage, like a Rothko painting.

The performers, male and female, are dressed in ordinary loose-fitting clothes, earth-toned T-shirts and trousers. The only unusual features are the long, tight-fitting gloves that each one wears, reaching elegantly above the elbow. As the birds warble happily on, these two dancers do what Forsythe’s dancers always do: they take your breath away with their stunning technique and artistry.

It is utterly beautiful to watch and this, you think, is what dance at the highest level must be: precision and athleticism matched with an effortless artistry that makes the physical complexity of what one is seeing— its sheer technical difficulty—irrelevant, and invisible.

It’s also a unique and instantly recognizable style: extraordinary geometric poses transition and shift with astonishing fluidity and rapidity. Rigid tension is created in the dancers’ bodies and then miraculously seems to liquefy. Watching from the audience, you feel somehow you’re learning more about what it is to be human, to possess a body—to move through space.

This, after all, is what great artists do: they extend our sense of what it is to be human, in ways we often can’t put our finger on. Not many artists can truly be said to have revolutionized their chosen form of expression.

Forsythe took the classical ballet that he’d learned as a dancer (he was himself a performer, but a not particularly distinguished one) and, in a word beloved of dance critics and academics, “deconstructed” it. In his hands, it was reassembled into something utterly new but also recognizable — as in “conventional” ballet, there are pirouettes and pliés and wonderful leaps that make you gasp.

But alongside this familiar vocabulary he has created something deeply strange, at times even unsettling. His idiom has been admired, copied and incorporated — for better and worse — by countless subsequent choreographers.

Forsythe’s influence on contemporary dance cannot be exaggerated. I was particularly struck, in this production, by Forsythe’s unconventional use of gesture. Unlike traditional ballet (in which a dancer’s hands are used to project a movement, as an extension of the arm), Forsythe uses clearly detailed hand gestures, almost an Asian dance form.

At one point, the male dancer appears to control the female, stopping her with a flag-like gesture, fingers and thumb locked tightly together. Facial expression, too, is key for Forsythe. Where the traditional western ballet dancer’s face is a bland mask, with a narrow range of “permitted” (and somewhat clichéd) expressions, in Forsythe’s work the emotion of the eyes convey an astonishing intensity.

It is his dancers’ ability to truly inhabit their emotions that elevates Forsythe’s productions into something transcendent, beyond mere spectacle. The driving force of his work is this “inner narrative”— not narrative in the conventional sense of “story”, but something intangible that connects the performers, and those watching, to a universal sense of the human.

And it doesn’t always work (this stuff is difficult!) Some of Forsythe’s dancers, at least on the night I attended, were not at the level to truly transcend the performative. Their technique was impeccable, of course, and there were no errors, as such, in their presentation.

And yet at times something was… missing. It’s impossible to define exactly what that “something” is—but, whatever it is, it’s what makes art great art. Even the greatest artists cannot summon it in work after work, night after night. But the best — such as Forsythe and his troupe — attain these peaks more than most. It takes rare genius — and a lot of hard work. We are fortunate to witness (and, as audience members participate in) the mastery of this great dance-maker, still very much in his creative prime at 70.