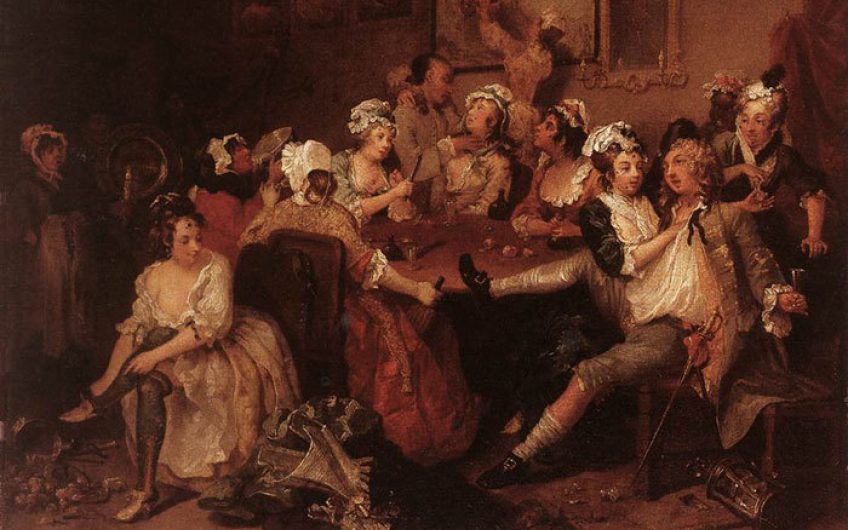 You could do worse than emulate the star of A Rake’s Progress, about to star in a ground-breaking exhibition of all William Hogarth’s series of ‘modern moral’ paintings at Sir John Soane’s Museum.

A Rake’s Progress was his second morality tale painted in series form, before being engraved for sale. Hogarth (1697-1764) began as an engraver and then learned to paint by working for Baroque muralist James Thornhill, whose daughter he married. His painting improved rapidly while his engraving was always superb. When he completed A Rake’s Progress in 1734, he was at the top of his game in terms of technique, composition and storytelling. He had invented the 18th-century box set.

Hogarth gleefully crammed plot into each funny, didactic and salutary painting, using various forms of visual shorthand including wry textual pointers such as bills and tracts and apposite paintings on walls. But he relied even more on clothing, demeanour and pose. We have long interpreted wealth, status and attitude through clothes – take medieval sumptuary laws – and exploited them for comedic or moralistic purpose. But razor-witted Hogarth painted clothing with such vim that he must have sniggered at every brushstroke.

Set in London, A Rake’s Progress tells the tale of Tom Rakewell’s rise and fall over eight paintings. We first see him as a gormless youth in a baggy cloth suit, shoes with paltry buckles and his own curly brown hair (which no gentleman would be seen dead in, rather than a wig), being measured for a new suit while dumping his poor but faithful girlfriend.

Next he’s dressing, poncing around surrounded by hangers on. Now he’s a snooty, idiotic fop in a pretentious, frogged and brocaded, tight-waisted, skirted silk banyan (a showy morning or dressing gown worn to receive visitors) and matching Turkish slippers, his shaved head covered in an impromptu turban before his wig is donned.

He next appears drunk and disorderly in a tavern with thieving prostitutes. The following painting shows his arrest as a debtor en route to being presented at Court. Now he resembles a poodle in a powder-drenched wig, overblown black satin bow at the neck, and a ‘Frenchified’ coat, smothered in showy gold lace, considered vulgar by British commentators. The term ‘Frenchy’ was often hurled in the street if men appeared flashily dressed.

We next see Tom callously marrying a rich, elderly widow for money, then losing everything at cards, his wig on the floor. His exposed pate is Hogarth’s shorthand for mental instability. And in the next picture he’s delusional in debtor’s prison, dressed in his presentation suit, the gold stuff torn off (and certainly resold — gold lace contained pure gold), his wig awry.

Finally, he dies, naked, shorn of his hair, in Bethlem lunatic asylum (whence we get the term ‘Bedlam’) with only a scrap of linen protecting the viewers’ modesty, and hinting at a shroud.

It is all tragically inevitable.

Apart from a shocked maid wearing a plain brown dress, all the women are prostitutes. No gentlewoman would drink in a tavern with a half-dressed man as the women’s clothing clearly reiterates. Most wear rather disordered silk dresses – perhaps stolen, since thieving is in progress. The well-dressed woman with her back turned, in a lustrous red silk dress, but with unkempt hair, slides a flagon of wine into her pocket slit (1). The slit, which gives access to pockets tied beneath the skirt, is abnormally long to facilitate pocketing. Women thieves often used their skirts to hide stolen goods, though constables were aware of the ploy.

Tom has stolen a watchman’s pole and lantern as a jape and brought them along, before sprawling in a chair. The prostitute feeling inside his shirt wears expensive peacock-hued velvet and a fashionable cap (2), its lappets (lace lengths either side) pinned on top. She has just stolen drink-sodden Tom’s gold pocket watch and hands it to her accomplice or bunter — an older prostitute turned servant.

His suit is fine: matching silk breeches and coat with wide buttonholes worked in gold (3). Costly gold lace decorates the sleeve and crotch of his breeches. The breeches appear button-fronted (here undone), though a flap front had become more fashionable. His fine linen shirt hangs out. Men wore breeches through the 18th century; these became longer and slimmer, until the first full-length pantaloons at the close of the century led to unpressed, full-length trousers at the beginning of the next.

The coat sports a contrasting silk lining in apricot; elegant colours matched the cut of the suit. Silk was usually French or Italian, and sold from mercers’ shops in places such as the Royal Exchange in London. From the 1730s fancy silks were woven in Spitalfields.

One of Tom’s smooth, white, silk stockings has come ungartered and its rumpled state echoes his drunken one. But his elegant black leather shoes hold glittering paste and silver buckles (4). It will be a miracle if these last the night. Tom’s tricorn hat is askew on his dopy head. A gentleman was never without his hat. Beneath, he wears a curled blond wig with a lover’s knot tied in it.

Gentlemen wore wigs throughout the century, whereas women often wore their own hair, powdered or unpowdered, with added hairpieces. The best wigs were human hair, the cheap ones horsehair, and they responded to fashion. The century started with full-bottomed long wigs, which, by the 1730s, only old men, lawyers or doctors wore. Short, bobbed wigs, sometimes black-tied at the back (a bag wig), became the style, while curls, or height, changed often. A man bought powder in bulk and might be powdered in a small powder room, protected with a cloth and sometimes face cone, while his barber or servant blew fine rice powder over his head. The wig could also be powdered on a special wig stand.

The rake wears a sword (5), here a rapier, decorated with silk ribbons but alarmingly unsheathed and trailing. Hogarth enjoys a cheap crack – the Rake is evidently unsheathed, too.

Rakewell’s undress, moral and actual, is mirrored by a dancer calmly stripping.

In contrast, the pretty, pearl-necklaced posture dancer is stripping professionally. Her skirt and bodice are already off, along with her boned stays (corset), decorated with a silk rose. Lengths of whalebone, steel or wood, called busks (6), were inserted into special pockets inside the stays to keep them rigid.

Unusually, neither she nor the other prostitutes wear hoops, but these women may have left them off on purpose. Down to chemise and underskirt, she calmly removes a charming high-heeled slipper. Next off will be the racy silk stockings, flaunting red ‘clocks’ – the long triangular section (7) that allows the leg to widen into the foot. Gentlewomen wore white silk stockings, while servants wore practical black wool. Gartered above the knee with tied ribbons, the stockings must often have fallen down.

The end of the political cartoon?

The answer to British summer weather? The literary festival!