Wimbledon - the joy of old tennis rackets. By Liz Hodgkinson 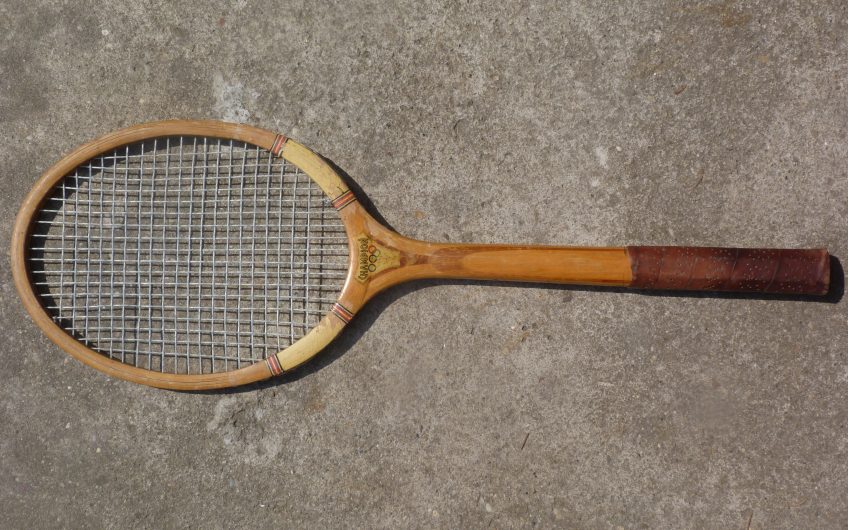 It’s not my actual racket of course as that died the death decades ago, but the same model, a wooden Dunlop Maxply Fort, the iconic tennis racket that everybody wanted in the 1950s and 60s. Although I was never going to win Wimbledon or get anywhere near, I was obsessed with tennis as a teenager and naturally, wanted the best racket that money could buy. That was, without doubt, the Maxply Fort.

So I saved up my pocket money all winter, did odd jobs, and in the spring, had just enough for what was then the most desired tennis racket in the world. It cost £7 as I remember; a huge sum to pay for a schoolgirl’s racket but it improved my game immensely and made me the envy of my tennis-playing pals. It had real catgut strings, not nylon, and came in a variety of weights, so that I could choose the exact right racket for me.

Australian tennis ace Rod Laver won four Grand Slams in 1962 using a Maxply Fort and in 1981 John MEnroe beat Bjorn Borg playing with one. But that year, really, marked the end of the reign of the old-style Maxply, although McEnroe continued to play with one until 1983.

Wooden rackets now began to be replaced with injection-moulded carbon fibre and then with graphite frames. Animal gut was replaced with rocket-science type fibres of which Luxilon is the latest. The shape and size of tennis rackets changed for ever, completely altering the game.

Dunlop, inventors of the Maxply, started out as a rubber tyre company and began manufacturing tennis balls in 1923. This got them into the tennis market generally, and the Maxply was launched in 1932. It was to become the most famous tennis racket ever made and was, for 50 years, the racket of choice for champions, and also for members of local tennis clubs, if they could afford it.

As lighter and larger frames replaced the old ash or beech wooden ones, the game became faster and more aggressive, and allowed for heavy topspin. Serves became so fast that in some cases they were actually impossible to return.

The development of graphite rackets and larger frames allowed more people to be good at tennis. In the past it was a difficult game, which was why you wanted the best racket available, as cheap ones were pretty much useless.

Taki, writing in The Spectator, explains how graphite and artificial fibres have turned everyone into a tennis champ. Well, up to a point. He says: ‘Wooden rackets and animal-gut strings made it among the most difficult games to master, if not the most difficult. If one failed to make contact with the ball in the racket’s sweet spot – a diameter of about eight inches -the ball flew out or didn’t go anywhere. If one didn’t step into the ball’s path and take it one the rise, the ball just died. If one didn’t meet the ball sideways, ditto.’

All of these problems are now no-nos, Taki concludes. Pancho Gonzales, once the fastest server in the game, served close to 113 mph. ‘Nowadays, a 15-year old’s second serve tops that speed.’ When watching Wimbledon, I have noticed first serve speeds of 123 mph, which would have been impossible with old-style rackets, even in the hands of a champion.

It’s good to think that with a modern racket and present-day tennis balls, I might have become a champ, although I somehow doubt it. I can’t entirely blame my beautiful Maxply for failing to be chosen for Wimbledon.

For me, though, nothing will ever come close to the much-loved Maxply, and I am not the only person who feels nostalgic for the wooden rackets of yore. Last year, in 2020, Prime Minister Boris Johnson was pictured playing tennis with a warped wooden racket that somebody said looked as if it had been left behind a radiator for years. Boris said: ‘I love old wooden rackets’ although It is not recorded whether he won the match.