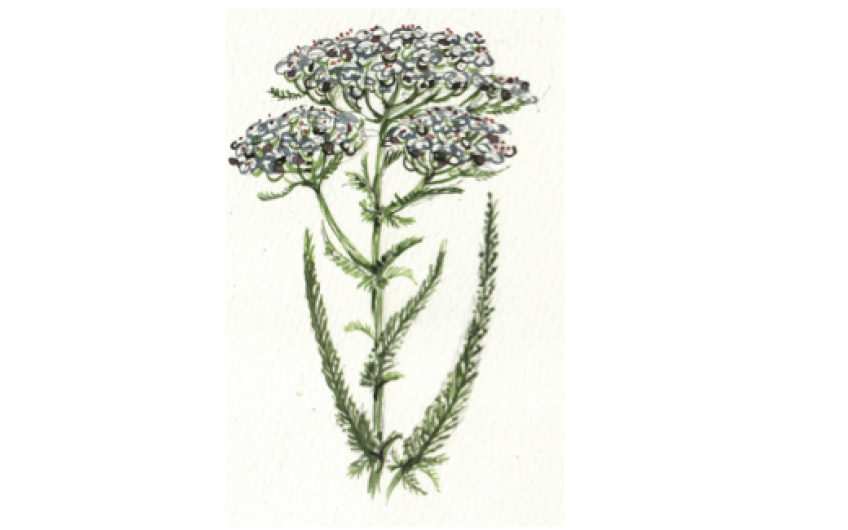 Pretty as a picture, with its feathery leaves and square stalks, topped by little saucers of pinkish-white blossoms, yarrow was once planted in medieval herb gardens, for medicinal as well as culinary purposes.

Its botanical name, Achillea millefolium, comes from the legend that the warrior Achilles, instructed by his goddess-mother, used it to treat the Greeks wounded at the siege of Troy. Common names - soldier’s woundwort, bloodwort, staunchweed - confirm its value as a salve for wounds. More prosaically, it’s also known as sneezewort, since the leaves, dried and powdered, were taken like snuff as a cure for headaches.

Widespread and common throughout the northern hemisphere in meadows, gardens and parkland, the feathery leaves have a peppery, spicy, aniseed flavour that increases in strength as the plant matures. To produce a crop of young leaves in high summer, cut the flowering stalk, level with the basal rosette, and the plant will respond with a generous fringe of tender new growth. Add young fronds, finely chopped, to a salad of mixed leaves or stir into a salsa verde as a sauce for fish. The flavour of more mature fronds - darker and larger – is more camphor than aniseed; so they are best cooked.

To prepare for the pot, strip the leaf fronds from the stalks, rinse and shake over the heat in a closed pan with a little salt and a splash of water till tender - a few minutes – then drain. Beat into buttery mashed potato to serve with roast meat or baked or fried fish, or combine with a creamy cheese sauce for cauliflower or macaroni, and bubble up under the grill. Aniseed flavours work particularly well in lentil stews with chorizo, and as a flavouring-green with grainfoods such as buckwheat, quinoa and amaranth. The flower heads, once dried, are used in alternative medicine in infusion as a stimulant: you have been warned.

I once met Christine Keeler's father

Are the most expensive offices in the world doomed?

Auberon Waugh rages against the Duchess of York