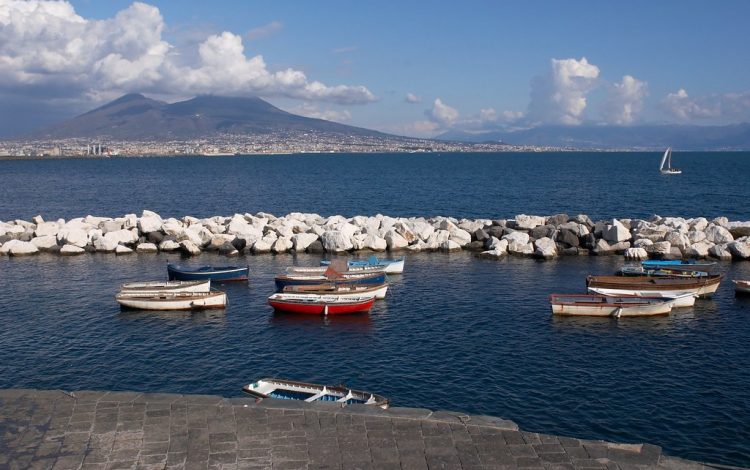 The ultimate destination for Grand Tourists in the 19th century, the Bay of Naples is one of the most evocative parts of the Mediterranean, and it still holds a remarkable magic to this day. With a fascinating history and a vibrant present, Naples itself is now a city determined to show off its unique charms to the full. Visits to the Roman sites along the coast are included in our tour, as is a wonderful day on the verdant island of Ischia.

We will be staying at the beautiful Hotel Santa Lucia (www.santalucia.it).

We visit the city’s spectacular Baroque churches, including the exquisitely decorated Cathedral of San Gennaro, the Pio Monte della Misericordia which houses Caravaggio’s ‘Seven Acts of Mercy’, San Severo and Santa Maria delle Anime del Purgatorio ad Arco, with its fascinatingly macabre cellar of human bones. We then take a break for lunch at a traditional Neapolitan pizzeria. In the afternoon we visit the Museo Archeologico with its incredible collection of sculpture collected by Lord Hamilton.

Excavations began here in 1738 under the enlightened patronage of the Bourbon King Charles. We also visit the beautifully restored Villa Oplontis, once home to Poppaea, the second wife of the Emperor Nero.

We start today at the Capodimonte Museum, built by Charles VII of Naples and Sicily to house the matchless collection of paintings and ancient sculptures inherited from his mother. We will see Caravaggio’s ‘The Flagellation of Christ’ here. After lunch in a local restaurant we will visit the Palazzo Zevallos, a wonderful small museum in a Neapolitan palace, after which we take a stroll through the evocative Spanish Quarter.

This morning we head south to the ruins of Paestum, one of the most impressive ancient sites in the Mediterranean. The astonishing remains of one of the most important cities in Magna Graecia include three exceptionally well-preserved Doric temples, dating from the fifth century BC.

We begin our visit with a panoramic sightseeing tour of the thronging, colourful streets of Naples. Each of the city’s neighbourhoods has its own distinctive flavour, with vastly contrasting worlds. We will visit Castel Nuovo which dominates the seafront and also the vast and impressive Palazzo Reale, where we will see the Museum of the Royal Apartments.

We will cross the Bay of Naples to spend a day on the island of Ischia. Sir William Walton and his wife, Susana, lived on the island from the 1950s. Walton composed many works at their villa, La Mortella and Susana created the garden, which is acknowledged as one of the world’s most ravishing. We will tour the island, have lunch at a local restaurant and end the day with a guided tour of the garden at La Mortella.

Price: £2,690 per person including flights, accommodation, all transport, breakfast, all lunches and dinners with wine, all entrance fees and the tour rep. Single Supplement: £490. To book: call Patrick on 020 7593 2281 or email patrick.millar@kirkerholidays.com