Nigel Pullman - I'm the last of the Nigels 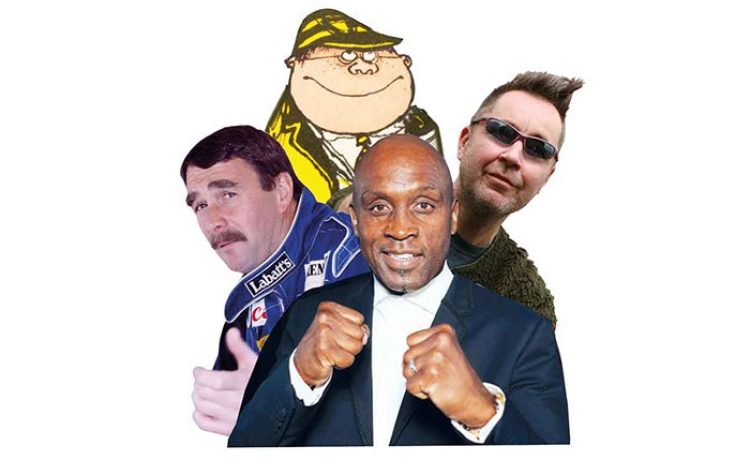 When my fellow 13-year-old new boys in the dormitory of my first boarding school discovered my middle name was Reginald, they hooted with derisive laughter.

‘I think it’s a jolly good name,’ I bravely said.

Their response was ‘Fine then – Reg it will be.’

I was not called by my first name, Nigel, again for the next five years. The moment I left school, I was happy enough to drop Reg and revert to this now deeply unfashionable forename.

But, alas, new data from the Office for National Statistics reports that, yet again, in recent years Nigel did not even reach the minimum three registrations in 2020 to merit recording. Where does that leave Formula One star Mansell (b 1953), top classical violinist Kennedy (b 1956), boxing champ Benn (b 1964) or you-know-who of Brexit fame (also b 1964)? Or indeed me (b 1947)?

Unlike Benn and Mansell, I cannot claim nominative determinism – the Gaelic word niachas means champion, and this is a possible etymology of the name. Another Gaelic word, nél, means cloud, which doesn’t seem to get us very far, or, in Latin, Nigel derives from niger, meaning dark or black.

Thatcher’s Chancellor Lawson (b 1932) is now probably better known for his domestic-goddess daughter Nigella – clearly he liked the name! Unfortunately, not many others seem to – Nigella didn’t make the ONS records either.

My own favourite Nigel is the steam locomotive inventor Sir Nigel Gresley (1876-1941) – another champion. And, with a surname like Pullman, I like to think that maybe it was Gresley’s Mallard loco setting the world speed record of 126mph just nine years before my arrival that prompted my parents – Cecil and Désirée (wonderfully old-fashioned names) – to choose my Christian name.

It may be some consolation to my fellow Nigels that we are not the only ones to have fallen out of fashion. There were fewer than three Carols registered last year, and many other once-popular names face extinction.

Well, sad to report, there were just three Rons brought into the world (or the UK, at least) last year, and 17 baby Ethels, which puts them both firmly in the bottom ten today.

And what of Gary? He too now barely registers, notwithstanding the daily Today programme racing tips from long-time BBC sports reporter Richardson – but he’s Garry, like the cricketer Sobers. Sadly, for footballers Lineker and Neville and Take That singer Barlow, the shamed and convicted Glitter has tarnished the name.

Wikipedia tells me of more than 30 Nigels in film and fiction. To my mild shame, I was familiar only with him of St Custard’s prep school. N Molesworth, ten years old in 1950, hated the name. ‘Chiz chiz chiz chiz,’ Molesworth said if people called him Nigel. I like the sound of Nigel, a ‘sadistic, sulphur-crested cockatoo’ in the children’s cartoon Rio.

But back to real life, and now sadly death: we should not forget TV gardener Monty Don’s golden retriever, perhaps the most recent and popular Nigel.

What has gone wrong? Monty Python may have started the rot with their Upper Class Twit of the Year sketch, which features Nigel Incubator-Jones – ‘His best friend is a tree and in his spare time he’s a stockbroker’ – alongside Simon Zinc-Trumpet-Harris – ‘He’s an old Etonian and married to a very attractive table lamp.’

More recently, 10 Things I Hate About You, a popular teen film, also did Nigel PR no favours. In the offending scene, a few school nerds are having a small drinks party, unaware that it’ll soon be invaded by hundreds of raucous, cool kids. When the gatecrashers ring the doorbell, the unaware host dashes to answer with the immortal line ‘That’ll be Nigel with the Brie.’

The Australian alliterative derogatory slang Nigel No Mates (then reduced to just ‘a Nigel’) cannot have helped. The shortened version Nige seems especially ugly, but my old friend David (never Dave) loves teasing me at Christmas with his lame and oft repeated joke ‘Nige – Noel!’

Despite all this, I have been pretty content to live with my name – but I won’t be overly disappointed if any yet-unborn grandson is not another Nigel.

Maybe we need not mourn the loss of Nigels, or the similar demise of Kevin and Tracy, now barely registering in the charts, and should welcome instead the continued popularity of the Olivias and Olivers at the top. They are joined by Noah, Muhammad and Leo in the top ten for the boys, and Isla, Ava and Mia for the girls.

Coming up fast are 189 boys called Kylo, 142 called Kacper and 64 called Cai, and I guess the 86 children named Aadam will always be top of the class.