WHY, ON THE 700TH ANNIVERSARY OF DANTE’S DEATH, WE MUST “ONORATE L’ALTISSIMO POETA!” 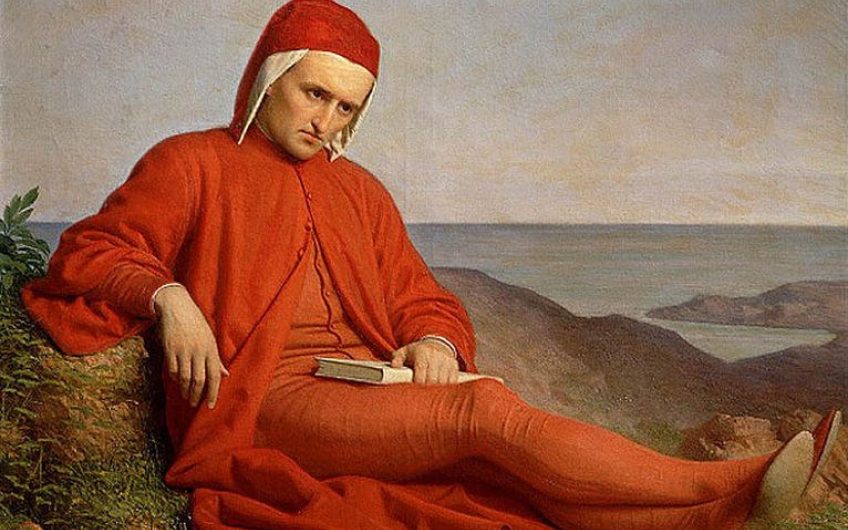 “Onorate l’altissimo poeta!” “Let us honour the greatest poet!” These laudatory words were the eloquent homage to the Latin poet Virgil in Dante’s poem the Divine Comedy, spoken when the wayfaring pilgrim and Everyman protagonist meets the Roman author of the Aeneid amongst the virtuous heathens in Limbo on his journey through hell (Inferno, Canto IV).

But this famous, much quoted line can equally be applied to the Tuscan literary luminary himself. In fact, it rightfully appears engraved on Dante’s (empty) memorial in the Basilica of Santa Croce in Florence - empty because he is actually buried in Ravenna.

And “onorate” is exactly what we should all be doing today, because September 14th marks the 700th anniversary of the death of Dante, the medieval Florentine poetic genius, the acknowledged father of the Italian language, along with Petrarch and Boccaccio the first in the triumvirate of Italian literature’s demi-gods, and, according to esteemed American literary critic and scholar Harold Bloom, alongside Shakespeare (of course), the Western canon itself.

On rare occasions, such hyperbolic assertions are useful, and in this instance not wide of the mark, such has been the gargantuan effect of the Divine Comedy on the Western, and by extension, universal consciousness - be it poetic, aesthetic, moral, cultural or spiritual.

I could not possibly seek to improve upon what A.N. Wilson (author of the erudite and insightful Dante In Love, 2011) has already written in this month’s magazine about why Dante is both so great and so relevant, but here I merely seek to offer a personal tribute to the colossus of Italian and world literature whose poetic peregrinations through supernatural realms have firmly embedded themselves in the human psyche over many centuries.

Dante Alighieri - to give him his full name — author of the Commedia (the epithet “divine” was added hundreds of years later) was born in Florence in 1265 and died in Ravenna in 1321, aged 56, having been exiled from his native city in 1302 for political reasons. At the time of his death, he had endured almost two decades of arduous, lonely and soul-destroying exile in northern Italy.

Dante was also the author of various minor works on a range of philosophical, amorous, linguistic and political themes (such as the Convivio, the Rime, the Vita Nuova, De Vulgari Eloquentia and De Monarchia), but the Commedia is where his fame principally resides - the towering allegorical pilgrimage through Hell, Purgatory and Paradise featuring as his guides the Latin poet Virgil and his own beloved Beatrice (the embodiment of human reason and divine revelation respectively), all told in majestic, utterly compelling terza rima.

With its coruscating formal beauty, harmonious architectural grandeur and faultless symbolic design, its consciously didactic spiritual message, its intensely moral subject matter, its quintessentially medieval theological acumen, not to mention its hauntingly vast imaginative power and descriptive sublimity, it is a poem for all ages and for all mankind.

Irrespective of one’s religious persuasion, creed, class or colour, the Commedia speaks to us all, effortlessly transcending, like all truly great literature, the vagaries of time, place and space.

First introduced to Dante’s poetry as a callow undergraduate (eternal thanks, Dr. Dorigatti) and then as a somewhat lackadaisical post-grad student (profound gratitude, Dr. Took), my literary sensibilities, not to mention world view, have been immeasurably enriched by reading Dante’s poetry over several decades. Whilst not subscribing to his heavily Aristotelian, Thomistic and unapologetically Judeo-Christian world view, I am unashamedly a product of it, and remain conscious of the effects of many tenets of Dantean thought on my own morality.

For me, Dante is perennially relevant, both as a poet and a thinker. Above all else, I have benefitted from the amorous philosophy which imbues the entire Commedia, and which is inculcated within the last line of the poem, arguably the greatest insight into human life on earth: that love is the animating principle of the universe. Concluding the Paradiso, Dante posits that it is ‘L'amor che move il sole e l'altre stelle” - ‘Love that moves the sun and the other stars.”

Dante, like Shakespeare, not just magisterially articulates the eternal verities at the heart of the human condition - be it the deleterious effects of excessive carnal pleasure, cupidity, venality, man’s spiritual yearnings, his desire for knowledge or his desire to return to God, but does so with beautiful stylistic aplomb and exquisite craftsmanship.

In fact, in many ways, Dante, like Shakespeare, is the human condition. To read Dante is to understand life in all its myriad complexity, peerless beauty, egregious brutality, heinous violence, ontological purpose (or lack of), cosmic perspective, intrinsic ephemerality and constant mutability. To read Dante is to understand man’s tireless quest for existential belonging, freedom and love. To read Dante is also to see the world and life on earth sub specie aeternitatis. What could be more intellectually liberating and philosophically empowering than that?

Dante’s Commedia is, in short, the acme of artistic, philosophical and theological creation. In it, Dante undoubtedly elevates the human spirit to another level.

Today, on the 700th anniversary of his death, we must salute Dante’s universal and timeless greatness with renewed vigour, passion and commitment. Moreover, given the point at which we currently find ourselves in human history, we arguably need more, not less Dante in our lives.