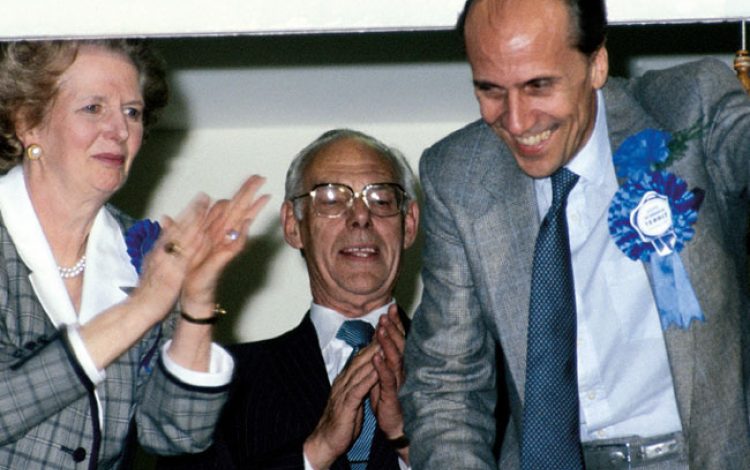 As a new election campaign kicks off, Norman Tebbit recalls the highlights and lowlights of his political campaigns

News of a general election brought back a flood of memories of fighting elections in years long past.

The only election I ever lost was in 1945, when I stood as the Conservative candidate in my third-form election at Edmonton County Grammar School and, like Churchill in that year, went down to defeat at the hands of Labour.

It was not until 1970 that I tried my luck again but, that time, with the far more limited ambition of doing rather well in a safe Labour seat, but not quite winning.

I was a senior co-pilot with BOAC, on the verge of promotion to Captain, and another five years in the pension scheme would have given me much greater financial security. By doing well in an unwinnable seat, I hoped to enhance my prospects of selection for a safe seat to win in the election of 1974 or 1975.

The prospective Conservative candidate for Epping stood down in the autumn of 1969. The seat looked perfect. Seemingly unwinnable, it was held by a hard Left-winger, Stan Newens, with a majority of 7,500. I was born only a couple of miles outside the constituency, had been a fighter pilot based at RAF North Weald there, and knew most of the local pubs.

I won the nomination and fought a rollicking campaign, often with our young children in the back of the car. As we approached Labour’s stronghold of Harlow New Town, they would shout, ‘Enemy coast ahead!’, and crouch on the floor.

On polling day, I turned up for the count and, to my horror, was declared elected by a majority of 2,500 votes. My supporters celebrated wildly. I woke next morning with a hangover, turned in bed to my wife and said, ‘What the hell have I done now?’ The answer was simple: exchange a secure job for a highly insecure one at half the salary.

Happily, Epping constituency was broken up by redistribution and I inherited out of it the safe seat of Chingford.

I never found such fun in local electioneering again, although I built my Chingford majority from 5,683 in 1974 to 17,955 in 1987. Indeed, it could at times be worrying, especially when my political agent lost my nomination papers. It was just as well that I had time to get another set completed before the deadline.

However, electioneering from Conservative Party headquarters, then happily still in Smith Square, was a different matter. In 1983, the Chairman of the Conservative Party was Cecil Parkinson, my oldest friend in politics. I was Secretary of State for Employment, taking through Parliament the great Employment Acts which cut the trade union leaders down to size and gave the members the rights to pre-strike ballots. I was in Margaret Thatcher’s inner campaigning group, chaired by Cecil, alongside Willie Whitelaw, the Home Secretary, and Geoffrey Howe, the Chancellor of the Exchequer.

At all moments of stress, the Chairman’s secretary, Shirley, would declare, ‘Time for jungle juice!’, and produce a bottle of champagne. Just as important, she would ensure we took no more irrevocable decisions after that.

It was on 23rd May 1983, more than three weeks before polling day, that Cecil confided in me that his constituency secretary was pregnant and asked my advice.

‘For God’s sake, don’t tell the Prime Minister,’ I told him, knowing that he was destined to become Foreign Secretary and, in those days, such things mattered.

As usual, there was a ‘wobbly Thursday’ a week before polling day, which I happily missed at an EU Council of Ministers in Luxembourg. I returned to find Cecil torn between loyalty to his wife, Anne, and responsibility for his child.

He told the Prime Minister of his problem on polling day. As a result, he was left as Secretary for Trade and Industry, the post I had coveted, while I remained at the Department of Employment. Inevitably, the story leaked and in October Cecil was out of office.

A year later, my wife and I were among those injured in the IRA attempt to murder Margaret Thatcher at the Conservative Party Conference in Brighton. Three months later, I took my seat on the front bench in the Commons but, by then, I knew she would be severely crippled for life. Nearly thirty years earlier, we had sworn to comfort and care for each other, in sickness and in health, so long as we lived. I knew that I could never again seek election to the Commons.

So my last election was as party chairman in 1987. It was all the more fun since only I knew that I would never fight another. The trickiest thing was to persuade Margaret Thatcher that I would never again hold office. What sadness – no more ‘jungle juice’ at Central Office!

Lord Tebbit was Employment Secretary, Trade Secretary, Chancellor of the Duchy of Lancaster and Chairman of the Conservative Party, 1981-87.

The discovery of Europe