What were pig clubs? 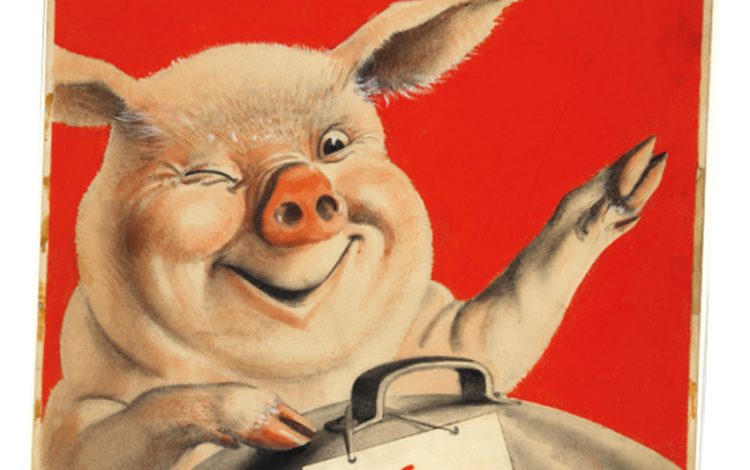 The government introduced pig clubs during the Second World War years of food rationing. The Small Pig Keeper’s Council (SPKC) was the national governing body that gave advice and rules on how groups and individuals could raise pigs. Pig club members would buy a pig, and provide food waste for the pigs to eat, care for them and ultimately share the meat that was produced.

Every pig had to be registered with the SPKC, and the authorities tracked and controlled what happened to the meat. The club members could keep half for themselves; the other half would be handed over to the Ministry of Food.

Every individual family was allowed – encouraged even – to keep a single pig for personal use and every farm cottage could have an allocated pigpen.

A Ministry of Food advertisement summed up the value of collecting household scraps and feeding a pig:

And all because of the housewife’s pail.

I saw my grandfather’s pig club in action on his Northumberland farm, when I was a boy. Every bit of our food waste went into our pig swill bucket. What we didn’t use was collected by the ‘pig swill man’ for use on the farm. ‘Pig Swill Eric’ was a cheery chap with brown-stained forearms. There was something strangely comforting about the sweet, sickly smell of pig swill about him.

When it came to killing the pigs, Joe and Eddie were our farm slaughters. They weren’t paid to do this work, but they were rewarded with a pack of home-made sausages. A circle of people would surround the pig, trapping the terrified, screaming animal, so Joe and Eddie could do their work.

Once killed, the creature was shaved in scalding water, beheaded and disembowelled. Every element of its body was carved and put in the appropriate pile for cooking. Very little was wasted. We didn’t have refrigerators, so the meat was cooked quickly or packaged in salt for the cold-storage room. Our unlucky ‘stay-at-home piggy’ had been starved to minimise digestive effluent.

Joe and Eddie were also our Burke and Hare-style pig body snatchers. Extra carcasses from ‘unregistered’ animals would be transported by wheelbarrow along the back gardens to avoid being spotted by the inspector, and thus being included in his tally.

My grandfather often told the tale of discovering two left halves of pig body in his store, just ahead of the inspector’s visit – too late to organise Joe, Eddie and their wheelbarrow. No rearranging in the salt store could make the two left halves look like they came from a single pig – when in fact we had two.

Pray for those in peril on the sea - Mary Kenny