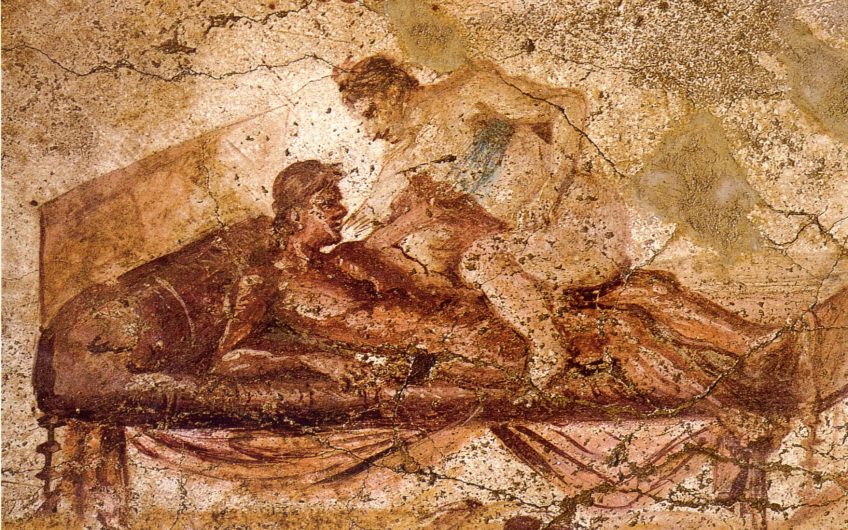 Latin graffiti has started appearing on British churches. It's through Roman pictures and graffiti, says Harry Mount, that we find out what the Romans were really like

Latin graffiti has started appearing on British churches. In a revival of an old custom, the letters, C, M and B, are written on church doors: standing for 'Christus mansionem benedicat' – 'May Christ bless this house.'

Recently, graphic mosaics were also found at Antiochia ad Cragum in Turkey; they're wonderfully designed – and extremely rude. Narcissus and Ganymede are depicted admiring, what you might call, their own naked assets.

These mosaics were used to decorate a Roman latrine, showing how the Romans beautified even the most humdrum of rooms; and how open they were about sex.

It's hard for us prudish 21st-century Westerners to understand that – because we're so programmed to think of the past as being innately more conservative.

That principle applies particularly to Latin. Because classics has been the preserve of public schools and the Catholic Church for centuries, it's easy to forget that people actually spoke Latin; that they swore in Latin; that they admired the opposite sex, in graphic terms, in Latin; that they bet on Ben Hur in the 3.30 at the Circus Maximus in Latin.

If you want to know how everyday Romans - not Virgil, Tacitus or Julius Caesar - actually talked, then look at Roman graffiti. It still survives in great quantities, scrawled above the bar in Pompeii tavernas (pictured above is an image from a Pompeii brothel, incidentally), scribbled on the walls of houses in Rome. It's often in very good condition, although it can be quite hard to make out - with no divisions between the words, and the letters written in a recognisable, but hard to decipher, ancient font.

Once you do work it out, you'll find that, just like schoolboys today, the Romans loved their graffiti to be rude. In the house of Claudius Eulogus in Via Dell'Abbondanza, one of Pompeii's main streets, there is a piece of graffiti with a very modern sensibility:

In the basilica in Pompeii is written the line, "Lucilla ex corpore lucrum faciebat" - "Lucilla made money from her body."

On a nearby wall, someone has written, "Sum tua aeris assibus II" - "I'm yours for two bronze coins."

It wasn't just rude words they liked to write. In the Domus Tiberiana in Rome, there survives a crudely-drawn man with an oversized penis for a nose. Graffiti artists also liked drawing dogs, donkeys and horses, but they liked phalluses most.

Still, the romantic old Romans did rise above pornography in the eternal search for romantic love. Plenty of lovelorn graffiti survives, including this in the house of Pinarius Cerialis in Pompeii:
"Marcellus Praenestinam amat et non curatur."
"Marcellus loves Praenestina but she doesn't care for him."

Some of the writing is less graffiti, more advertisement. In Herculaneum, in a taverna's kitchen, the proprietor wrote, "XI Kalendas panem factum" - "Bread is made on the eleventh of the month."
Just like in modern Italy, political graffiti was also popular. In Via Nolana, Pompeii, you can see the slogan, "C. Iulium Polybium aedilem oro vos faciatis. Panem bonum fert" - "I beg you to make C. Julius Polybius aedile [a magistrate]. He makes good bread."

Lovers of Roman civilisation will be relieved to discover that the graffiti can get pretty high-minded, too. Some graffiti-writers cleverly referenced the great Roman authors, as Fabius Ululitremulus did in his Pompeii laundry:

In Balbus's house in Pompeii, there's the simple line, "Militat omnes", a borrowing from Ovid's line, "Militat omnis amans" - "Every lover fights."
People who struggled with their gerundives and subjunctives at school will be pleased that the Romans also found their language difficult. The graffiti writer in Balbus's house should have said "omnis" in the singular, not "omnes" in the plural.

It brings to mind the wonderful scene in Life of Brian, where John Cleese's centurion tells off Graham Chapman's Brian for getting his Latin graffiti wrong:

Centurion: How many Romans?

Some of the mistakes in Roman graffiti are comfortingly basic. One writer in Pompeii confuses his accusatives with his nominatives, writing "pupa mea" ("my little girl"), when he should have said "pupam meam". In Sallust's house in Pompeii, someone really mangles his Latin, turning "quae bella es" ("you who are beautiful") into "que bela is". Bottom of the class, Sallust!

But let's not quibble over schoolboy mistakes. Let's rejoice in the moving poetry of the best graffiti, like these lines found in the Pompeii house of Cecilius Secundus:

"Let whoever loves prosper; but let the person who doesn't know how to love die. And let the one who outlaws love die twice."

Or what about these lovely words, scrawled onto the wall of a bar in Pompeii?

"Nothing can last for ever;
Once the sun has shone, it returns beneath the sea.
The moon, once full, eventually wanes,

The violence of the winds often turns into a light breeze.”

Not the sort of thing you find daubed in marker pen over the bogs in the Dog and Duck. But, even when Roman graffiti does sink into the gutter, it has the same stirring effect as the high-flown poetry - the hand that wrote it on a wall 2,000 years ago reaches out across the centuries and touches your heart.