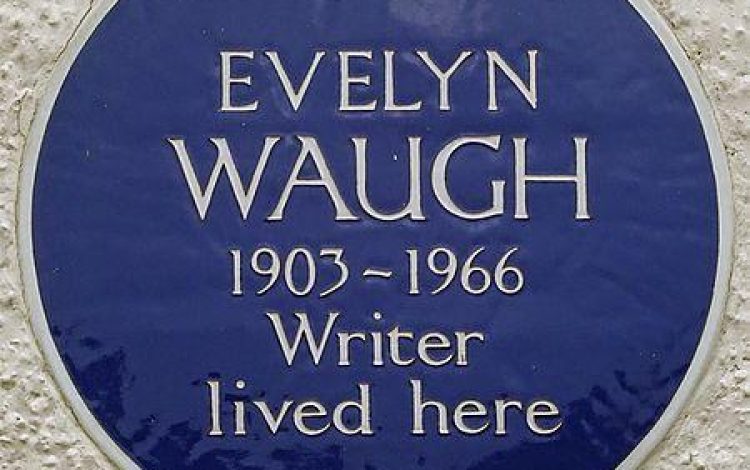 Combe Florey, the home of Evelyn and Auberon Waugh, is up for sale for £5.5 million. Fifty-five years after the death of the great novelist, his grave is being allowed to collapse into a heap because of bureaucratic bickering. By Teresa Waugh

The land belonging to Combe Florey House in which Evelyn Waugh died on Easter Day 1966 slopes down towards the church and drops into the churchyard where it is supported by a retaining wall.

Like many things – not least of which is the history of church property – the reasons for Waugh being buried on the edges of his land, adjacent to the churchyard, are lost in the mists of time. The one certainty is that it had absolutely nothing to do with his having been a Roman Catholic and in a funny way it had nothing to do with him since the decision to lay him where he still rests next to his wife was taken by his family after he died.

Quite some fourteen or so years ago a split appeared in the wall supporting the small plot in which Evelyn, Laura and their daughter Margaret FitzHerbert are buried. At the time I was living in Evelyn’s old house and, considering myself to be responsible for the graves which no one would wish to see falling into the churchyard, I took it upon myself to have the wall patched.

I was quite unaware of my transgression until a few years later when the crack widened drastically and it looked as though one side of the wall that turns at a right angle round the plot might collapse at any minute. I then consulted Bert Simons, an admirable man who had long worked for the family and who assured me that he could fix the problem. Had I kept my mouth shut he would have done it there and then. I would have paid him and that would have been that.

Oh no! Nothing can be allowed to be that simple. When I mentioned my plan to a member of the Parochial Church Council I was told not only that the wall had nothing to do with me but that I had no right to touch it.

History may relate that poor Bert Simons was chased from the churchyard by an angry parishioner waving a pitchfork. Be that as it may, the wall remains precariously unrepaired to this day just as hordes of culture-thirsty Americans make their pilgrimage to the great man’s grave.

I was informed that the wall round the long-since closed churchyard was not in urgent need of repair and that, in any case, it was part of the church fabric and something called a ‘faculty’ would be required from the diocese before anything could be done to it. But years later, after my son, Alexander Waugh, and my brother-in-law, Septimus Waugh, have, like Madame de Sévigné, spent themselves in letter-writing, it turns out that since the churchyard is now the responsibility of the local council, planning permission would be needed before any alteration to the wall could take place, that is if the wall isn’t – which it may not be – part of the fabric of the church.

So it goes on, round and round in circles until Alexander and Septimus draw up an elegant plan whereby the wall is mended and steps are built from the churchyard to the plot above, thus allowing Americans and others to visit the graves without encroaching on the land of the present owners of Combe Florey House. Even the PCC agreed to this, but that did nothing to release the deadlock.

Nobody seems prepared to compromise or to realise that with common sense and perhaps one telephone call from the diocese to the council or vice versa, the matter could be instantly settled, particularly since neither would be responsible for the expense of the repairs, the Waugh family – with no legal obligation – having offered to bear the cost. In other similar cases, of which I am reliably informed there are many, not only in Somerset but all over the country, that inducement may not apply.

Perhaps the powers that be are insufficiently proud of Evelyn Waugh’s connection to Somerset. It has often occurred to me that were he French, the local town would have not only a statue of him in the Place Vowg, but there would be a brasserie Vowg and for all I know a civet de lapin Evelyn Vowg. Wake up Taunton! It is fifty years since the poor man died; his grave is being allowed to collapse into a heap and not even the meanest back- alley has been named after him.

Instead Alexander received a sniffy letter from a member of the Taunton Deane Borough Council accusing him of not respecting his grandfather’s wishes. Waugh’s wishes with regard to his interment remain to this day unknown and no grandson has ever been prouder or more respectful of his grandfather than Alexander.

Nigel Pullman - I'm the last of the Nigels