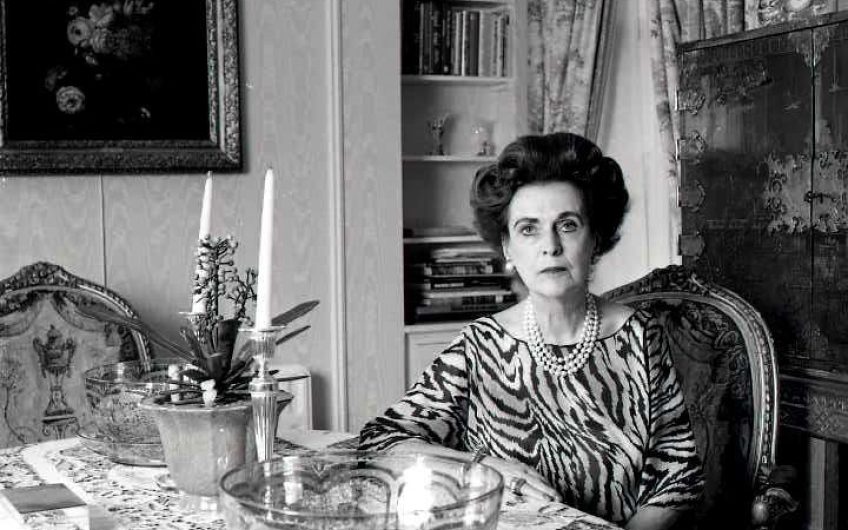 The sensational story of the Duchess of Argyll has been revived in A Very British Scandal. The real Duchess was a kind woman and a style icon, treated appallingly by her husband. By Lady Colin Campbell, the Duchess's stepdaughter-in-law

So Marg of Arg is back in the news, nearly three decades after her death, thanks to the BBC treating us, over three nights at the peak Christmas viewing period, to A Very British Scandal.

And what a scandal it was: the longest, costliest and nastiest divorce in Scottish legal history – a trauma Margaret never got over.

She could not see it, but she remained shell-shocked by the whole thing. Not the least of it was the unjust outcome. Lord Wheatley found against her on a technicality, ruling that because she had had the opportunity to commit adultery, he would assume that she had done so.

It is no secret that Margaret and I were great friends. We were what is now called trauma-bonded, the experience of being married to father and son: the Duke of Argyll – aka Big Ian – and Lord Colin Campbell. We shared parallels from which neither of us recovered entirely.

It is a pity that the producers didn’t see fit to approach her son Brian Sweeny or me, for we would have gladly steered them in the direction of the truth. Having the facts, as they did, without appreciating their relevance, they missed the chance to truly vindicate her.

The producer Sarah Phelps claims she had a longstanding interest in Margaret and her story – of misogyny and a woman who was in advance of her times.

That may sit well with the Sisterhood, and make for good marketing, but it really misses the point. Margaret was a woman very much of her time. She was the victim of snobbery rather than misogyny. She was dismissed as a rich American – she had spent the first 14 years of her life in America, but was Scottish through and through. Meanwhile the judge, a humbly born and devout Roman Catholic, couldn’t wrap his head around a duke being both a cad and a liar.

As it is, he bought Big Ian’s lies wholesale. Meanwhile, Margaret’s splendid defence of herself – and, it has to be said, of the many homosexuals who were named as potential lovers and whose reputations she nobly protected – was dismissed as the denials of a hussy.

As a result of Sarah Phelps’s failure to contact those of us who actually knew where the truth lay, the Bastardy Case was almost entirely incorrect. It figures in the third part of the series, and kicked off the whole sorry saga that the divorce became.

Margaret was set up by Big Ian, as my father-in-law was known in the family. His heir, the Marquis of Lorne, was Little Ian, an unfortunate moniker as he was nearly a foot shorter than his father. She agreed to take the rap for him, after his second wife, the American heiress Louise Clews, got wind of the fact that he was claiming that her two sons, Ian and Colin, were not his progeny. She came to England to issue writs, and Big Ian convinced Margaret that their rocky marriage would improve if she accepted responsibility for his statements. I can’t remember now who Little Ian’s father was supposed to be, but Colin’s was allegedly Prince Dimitri of Russia, the Tsar’s nephew.

As Margaret said to me, ‘How could I have known whether he was sleeping with Oui Oui [Louise's nickname] when the boys were conceived? I didn’t even know him then.’ Margaret was under a penal notice not to discuss the case and was terrified she’d be sent to prison if she did in any depth. So the person who was forthcoming about the whole matter was my sister-in-law, Lady Jeanne Campbell. It was Jeannie who told me the whole sad, sick, sorry story, and what a saga it was.

Margaret came out of it like the Dumb Bunny she kept on calling herself, but Big Ian? More like Satan, a name he reserved for Margaret, as Oui Oui prevailed and the divorce got underway. Then he determinedly set about destroying the woman he had once loved.

And why? My supposition, based primarily upon what Jeannie told me, was that he was embarrassed to have been embroiled in the Bastardy Case, and was determined to shift blame away from himself onto Margaret.

It didn’t help that she was trying to wean him off purple hearts, and he was determined to remain on them. And there was also the small matter of the £250,000 he wanted from her for a quiet divorce.

When she refused to oblige, telling him, ‘You can’t divorce me. You have no grounds,’ he retorted with words to this effect: you’ll see what I can come up with.

Incredibly, Margaret did not realise that Big Ian had a precedent for their divorce: that of his great-uncle Lord Colin Campbell against his wife Gertrude. Running from 1883-1886, that divorce had the distinction of being the longest, nastiest and most sensational divorce case in English legal history.

Queen Victoria's daughter Princess Louise was the couple’s sister-in-law. Her brother the Prince of Wales was declared as co-respondent – unnamed because there was no sufficient evidence to justify his inclusion. It was the greatest scandal of the Victorian age, despite having been forgotten by Margaret’s time. Forgotten by everyone but Big Ian – and unknown to Margaret until I told her, to her consternation, about it.

Margaret was undeniably gutsy. She had dignity. She had a much better sense of humour than she was given credit for, but she undeniably took herself very seriously.

Although Claire Foy is a good actress and captures Margaret’s dignity, it is a pity the producers could not have replicated Margaret’s style more accurately. She was a great style icon. She helped to put such eminent designers as Norman Hartnell and Hardy Amies on the map.

Yet the series not only failed to capture her chic and polish, but it also got her hair wrong. Very wrong. And Margaret was proud of only having three hairstyles throughout her life, none of which featured in the series. In fact, she once reprimanded me for wearing my hair in too many different ways. ‘You will confuse the public,’ she said, pointing out that both she and the Queen believed in tonsorial constancy and neatness.

Although the series presented Margaret as progressive, she was very much a woman of her time. In those days, when shining socially was a valid outlet for a lady’s energies, she was one of society’s brightest stars. She was unabashedly elitist.

She was also kind-hearted, loyal, and was a great dog-lover. Big Ian once said, ‘If Margaret loved me as much as she loves her dogs, I’d be the happiest man alive.’

She exulted in being The Whigham, the greatest debutante of all time, then the celebrated Mrs Sweeny (as in Cole Porter’s You’re the Top), and then the captivating Duchess of Argyll.

She wasn’t so keen on being the notorious Margaret, Duchess of Argyll, and was irritated by the fiction that she prized titles more than she really did. What she valued was quality, and she would gladly have traded being a duchess to become the wife of Bill Lyons – the American businessman in the famous ‘Headless Man’ intimate photograph with her.

When that didn’t happen, she held her head up high, didn’t deign to acknowledge the whiff of scandal which surrounded her after the divorce, and was surprisingly unstuffy. She could be very down-to-earth, despite relishing the ivory-tower existence she had had until the year before her death in 1993, aged 80.

But she was very much a lady, in the old-fashioned meaning of the word. She didn’t believe in frightening the horses.

She was so fastidious, too. Tony Marecco, an old friend of hers – formerly married to Lady Ursula Manners, sister of her son-in-law Charles, Duke of Rutland – once said to me he had never seen any evidence of Margaret being the raver Big Ian had portrayed her as being. Tony said she was so exacting that “I can’t see her allowing any man to ‘muss’ her hair.”

I remember visiting her at Eaton Mansions, where she was living, between moving out of the Grosvenor House and into St George’s Nursing Home, in 1992. ‘I should’ve died last year,’ she said. ‘I’ve outlived the life I was meant to live.’

She loved publicity. She used to make the point that she was a far bigger star, long before she married him, than the Duke ever was. It annoyed her that people seemed to think that being the Duchess of Argyll was what had ‘made’ her. She had ‘made’ him, she would say, not without some merit.

Some might say she had lived by the sword of renown and died by it as well. I would say she lived with dignity, despite finding herself in extremely undignified circumstances. Brian, her son, summarised it best when he said, ‘Mummy was more wronged against than wronging.’

A Very British Scandal is on BBC1 at 9pm Boxing Day

The Chiddingstone Castle Literary Festival kicks off this weekend!