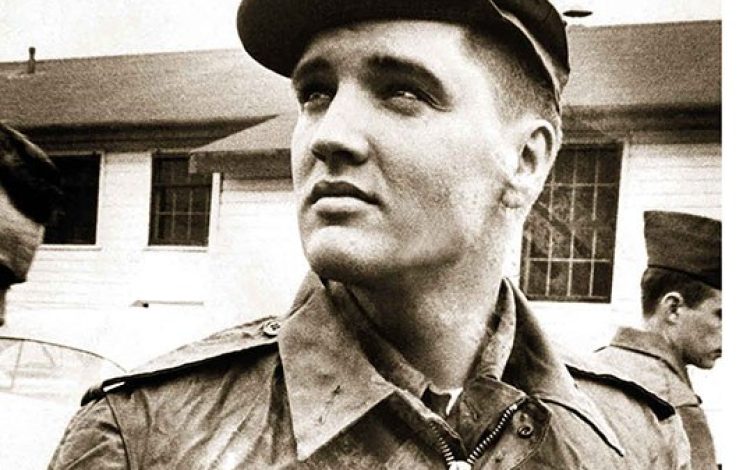 It was John Lennon who said, ‘Elvis died the day he went into the army.’

Sixty years ago, the King of Rock ’n’ Roll completed his two years’ military service – most of it in Germany, learning tank gunnery, scouting and other skills as part of the Third Armoured Division, the fabled ‘mailed fist of Europe’, based at Friedberg. And it’s 60 years since one of his most popular films, GI Blues.

Lennon was one for the snappy soundbite (‘We’re more popular than Jesus’). But this was no throwaway remark. Elvis mattered to Lennon, with his radical-rebel image, absence of constraint and songs like Heartbreak Hotel.

So for ‘the Pelvis’ – sensual, wild and unpredictable (Elvis himself found the nickname disgusting) – to join the army must have seemed like a neutering of the ‘Hillbilly Cat’.

Elvis joined as a regular soldier, rejecting the blandishments of all branches of the armed services to be drafted as an entertainer – in the so-called Special Services – which meant not getting muddy.

He was a good soldier, and one of the boys. Patriotism and duty drove him: he told the Memphis Press-Scimitar of his gratitude for ‘what this country has given me. And now I’m ready to return a little. It’s the only adult way to look at it.’ But his mother, Gladys, cried for days when he got the draft.

For Presley’s greedy manager Colonel Tom Parker, Elvis’s service as a regular soldier, not an entertainer, came down to money. No one was going to get Parker’s sole client to sing free of charge.

His time in the service would bring new maturity, bookended as it was by two cataclysmic events. First was the death of his mother, aged 46, of alcohol-related liver disease in 1958, just before he shipped out to Germany. And secondly, he fell in love with the beautiful daughter of an Air Force captain stationed at Wiesbaden: Priscilla Beaulieu.

He was Gladys’s only child, and his grief at Gladys’s funeral was vividly described by a young reporter for the Memphis Commercial Appeal – Charles Portis, later the author of the minor masterpiece True Grit. Weeping uncontrollably over the coffin, Elvis cried, ‘Goodbye, darling. Goodbye. I love you so much. You know how much I lived my life just for you.’ Four friends prised him away and into a limousine.

A year later, he met Priscilla. He was living at Bad Nauheim, near the army base, with his father, Vernon, grandmother ‘Dodger’ and a few Memphis chums. Priscilla was 14 (Elvis was 24); their first date was on a school night, but Elvis still poured out his feelings to his ‘little one’ while munching his way through five mustard-and-bacon sandwiches.

The relationship was platonic. There was no question of Elvis’s getting into the sort of trouble that derailed Jerry Lee Lewis’s career when he married his 13-year-old cousin.

Elvis’s other life-changing discovery in Germany was drugs. Like his mother, with her puffy cheeks and panda eyes, Elvis was prone to podge. Grandma ‘Dodger’ would make sure he was fortified before morning exercise by a hearty breakfast of eggs, his favourite burnt bacon, and biscuits (like British scones).

To fight the flab without the need for extra PT, Elvis had asked his father Vernon to order alfalfa pills from a Memphis pharmacy, because he’d heard that they helped. But he quickly learned to rely on something much stronger – amphetamine pills, which he bought in quart-sized jars from a pharmacist at the army-post dispensary.

Amphetamines were given to maintain heightened alertness. A sergeant introduced Elvis to them on a training operation, and the King was ‘evangelical’ about their benefits, according to his biographer Peter Guralnick.

He was already taking barbiturate sleeping pills for insomnia. As Priscilla Presley relates in Elvis and Me, soon after Elvis welcomed her to Graceland, he gave her pills, on one occasion dosing her with enough Placidyl to knock her out for two days.

Elvis gave no public performances during his service, but he listened to a wide range of records and, every night, tried out songs on the piano.

Here his army friend Charlie Hodge played an important role. Hodge was much more than the lackey who later, during the 1970s concerts, handed scarves to Elvis for him to dab his sweating brow and toss to the screaming audience. In 1959 Hodge was an experienced performer, and he helped Elvis to improve his vocal technique, moving him towards rich ballads.

One they tried was Caruso’s 1916 version of O Sole Mio: released as It’s Now or Never, it would sell 20 million copies for Elvis. Another was Are You Lonesome Tonight?, a hit for Al Jolson in 1927.

In March 1960, Elvis returned to the US in the rank of sergeant and, within days, he was the centrepiece of a welcome-home Frank Sinatra TV special, recorded in Miami with Sinatra’s Rat Pack, minus Dean Martin. It was exactly the sort of middle-of-the-road pap John Lennon would despise.

In fact, Elvis sailed – effortlessly cool – through the taping, in his dinner jacket, with shiny black hair done up in a sort of tower. Sinatra had once dismissed Elvis’s music as ‘a rancid-smelling aphrodisiac’ sung by ‘cretinous goons’. Now he had to welcome the younger man as a pillar of popular entertainment.

Elvis gives a respectful rendition of Sinatra’s Witchcraft. Sinatra belts out a self-parodying version of Love Me Tender. Elvis maintains his dignity and the show was a ratings smash, gaining a 67.7 per cent audience share.

Two further releases that year – GI Blues and a vibrant LP, Elvis Is Back – neatly encapsulate the opposing that forces pulled at Elvis for the rest of his career.

Elvis Is Back, recorded in April in Nashville, was pop laced with R ’n’ B: catchy, mildly suggestive songs such as Fever, Dirty, Dirty Feeling, Such a Night and The Girl of My Best Friend.

At the same time, with the single release of Are You Lonesome Tonight?, he showed new confidence, injecting high drama into a sentimental ballad. He would develop this in dozens of country weepies through the 1970s.

As for GI Blues, released in November 1960, it’s a family movie: Elvis sings Wooden Heart to a puppet, babysits a toddler, strums his guitar on a train with grinning army buddies (Frankfurt Special) – and falls in love with Juliet Prowse’s Lili.

Hal Wallis, the legendary producer, visited Germany in 1959 to do location shooting for the film, and you can visit the locations and explore Bad Nauheim and Friedberg in a holiday offered by the Elvis Travel Service this October.

The film bears scant relationship to the daily grind of life as a GI, but it projects Elvis’s good-natured personality, and the camaraderie he had undoubtedly enjoyed: he made friends for life in the army, including Hodge, and Joe Esposito from Chicago who would be his right-hand man for the rest of his life.

Whatever pain Elvis had been through, and whatever artistic disasters and personal agonies were to come (the list goes on, with the death this July of his grandson Benjamin Keough), GI Blues is a happy film.

John Lennon got it the wrong way round. It was after his spell in the army that Elvis became fully alive.

Sixty seconds that hooked the nation

The discovery of Europe